The Hunting of (Wo)Man 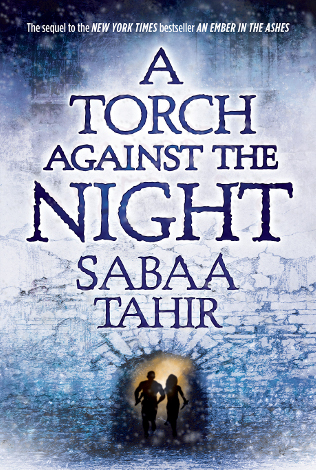 Like An Ember in the Ashes, I don’t particularly care for this cover. It (and the thickness of the books) screams “generic fantasy,” and there’s nothing that would have enticed me to pick the book up off the shelf if I wasn’t already panting after it. (Panting after it I was, however, and I imagine you are, too.)

WARNING! Spoilers for An Ember in the Ashes ahead. Read on at your own risk!

After the Fourth Trial, Laia and Elias are on the run from the army, the Commandant…and Helene, the new Blood Shrike. Helene’s mission is to rid the world of Elias and Laia, while Laia wants to break into the soul-sucking prison Kauf in order to rescue her brother...that is, if he’s even still alive. Elias won’t leave her alone to carry out her task—even if it means he’s caught, too—but to get to the prison, they’ll have to cross the country, and somehow escape Helene, the Commandant, and the warden’s notice. It’s a fool’s errand, but Laia’s brother could be the key to the Scholars’ survival.

Sabaa Tahir proves that she’s no victim of the sophomore slump in this fiery sequel, the second of four Ember books.

I still like Laia, who manages to be a great character while also clearly The Chosen One (or something like it). She’s still determined and empathetic, still single-minded, and pretty quick on her feet. This time, however, I felt a lot more connected to Elias and Helene—the former takes on massive(ly foolish) sacrifices in the name of friendship, family, love, and country, and so does the latter…albeit with a deadly practical bent. Helene, especially, is given a more tender treatment in this book (at least as much as you can, with her basically being the Emperor’s ice-cold assassin)—by the time the book is over, her motivations and backstory are significantly more clear. If you’re not in love with the three of them by the time it’s all over, I have to wonder whether we read the same book.

Granted, being any of these three kids’ besties involves a high mortality rate, so maybe we can be friends from a distance. Like, “meet up on the astral plane every once in a while, so there’s no physical evidence that I know you” distance.

Talky Talk: The Hunting of Man

To paraphrase our old pal Hemingway, this book is all about war and the hunting of (wo)man, and it’s a testament to Tahir’s excellent pacing that this book—which takes place almost entirely on the run—never drags.

As with Ember, the stakes remain high, and physical harm is always as real a possibility as emotional and mental harm. (Now that you’ve read it, can we talk about Laia’s branding in Ember? HOLY SHIT. Talk about high stakes! Expect more mutilations for characters—among other horrors—in Torch. Luckily for us, Tahir never does this for shock value.)

What I love about these books are the moral grey areas that Tahir paints her characters into, and then lets them attempt to get out of. Between court intrigue and tenuous loyalties, romance on the run and death lurking behind every mountain, the plot alone is enough to keep me reading—but it’s the characters and their complexities that win the day.

You’re off roaming the land with a couple of extremely hot guys (let’s not forget that Keenan still exists!), both of whom want to put their faces on yours. What’s a girl to do? I won’t spoil it for you, but I can assure you it gets steamy.

Can we still call this a road trip if there are very few actual roads involved? How about if the entire thing is drenched in tension and fear instead of sun and fun? Either way, trips with others tend to bring out your best and worst qualities; this trip across the country is no different for Laia, Elias, and Keenan. (Luckily for us, it also brings out the steam.)

I’ll stick with my original picks for Ember, and add a couple more:

Demi Moore as the Commandant

Hear me out on this one—Demi Moore is seriously underrated and underused as an actress. With her gravelly voice and ability to play cold-as-ice, she would make a strikingly deadly, strikingly beautiful Commandant. Just add grey contacts.

In the immortal words of Our Lady Britney, GIMME GIMME MORE, GIMME MORE, GIMME GIMME MORE. When I initially read this book, I wasn’t sure if the series would be a duology, trilogy, or more, so I kept waiting for all the loose ends to be tied. Just like Ember, I realized about three-quarters of the way in that there was simply no way this would wrap up all the stories inside…but unlike Ember, you now have the assurance that there will indeed be two more books in the series. YES! (Of course, the next one isn’t out until 2018. NO!) It’s hard to imagine how Tahir can raise the stakes even higher, but after this excellent installment, I have total faith in what awaits us. (Also, perhaps, a little fear. Okay, a lot.)

A Torch Against the Night is available today.