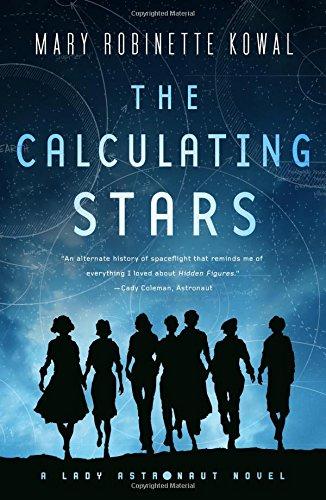 Hello, let me tell you how super great The Calculating Stars, the new novel by Mary Robinette Kowal, is.

It’s an alternate history of the world set in the 50s, in which a meteorite falls to Earth, causing what Elma, our protagonist – a lady scientist, physicist, mathematician and awesome pilot to boot – calculates is an extinction event. This accelerates the space program since humans now have to GET OUT OF HERE as fast as possible, anticipating the moon landing by almost a decade. Getting to that point though, is what the novel is all about.

It opens with Elma and her super awesome engineer husband Nathaniel on a break in the Poconos, when the meteorite hits. It decimates part of the US, killing thousands of people (including most of Elma’s immediate family) and starting a devastating domino effect that is only immediately obvious to scientists of Elma and Nathaniel’s caliber. Surviving the first few weeks is hard. Convincing the top brass, military and government officials that they need to speed up their space program to ensure humanity’s survival in the long run, is harder. Convincing these people that women should take part in the process of colonizing space, while being a woman scientist, seems almost impossible.

The novel’s greatest strength to me lies in its quietness – I know it probably sounds strange to hear this considering The Calculating Stars deals with topics as grand as an apocalyptic event, space exploration as well as overt systemic sexism and racism. However, it is Elma’s internal struggles with all of those that inform the story. From her sense of self-worth which wavers between a lack of confidence (which has been mostly enforced by external sexist forces) and her obvious genius intellect, to her ongoing struggle with anxiety (in an era that didn’t quite understand it well); from her unwavering belief that women wholly belong in the space program (she was a WASP pilot in WWII and knows a great deal of equally great women pilots) to her blind spots with regards to women of color (white feminism is a thing and this book does not shy away from showing Elma’s ignorance and privilege).

There is a lot of understated drama in the novel including the many times Elma has to buckle up and accept things she can’t change including a heart-rendering scene when she, a Jewish woman, has to work side by side with Wernher von Braun, the former Nazi scientist who famously defected to the US and without whom there may not have been a space program at all.

Where there is no drama, not even a little bit, is in Elma’s and Nathaniel’s refreshingly steady, sweet, supportive marriage. Ironically, this also adds some extra gut-punching emotions, especially if you read Kowal’s award-winning short story “The Lady Astronaut of Mars” which shows Elma and Nathaniel years later, already in Mars. The Calculating Stars is a prequel to that story and the first in a duology – the second novel, The Fated Sky is out in August and I, for one, cannot wait to read it.

If you like: lady scientists and lady astronauts, space science, lovely romance, the historical fight for equality, if you read or watched Hidden Figures and loved it, if you watched the Netlfix’s documentary Mercury 13 (about the very real 13 women who underwent secret testing to become Astronauts in the 60s), please don’t miss this one.

In Booksmugglerish: 8 out of 10.
MORE FEATURES