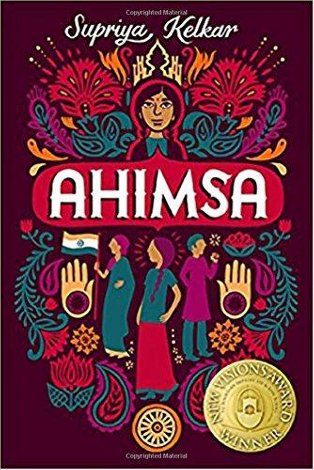 Every little bit we do makes a difference. This is a fight for independence on two fronts, inside and out. We must continue to protest the British and their unfair rules. And we must improve our society from within. What good is a free India when its people do not consider their brothers and sisters their equals? Social reform and civil disobedience must go hand in hand.

1942, India. In theory, ten-year-old Anjali is fully supportive of the movement for Indian independence from British rule, but when her family—and her mother in particular—gets more directly involved, Anjali is forced to wrestle with change, make sacrifices, and consider her own privilege and prejudices. The more her eyes are opened to the injustice around her, the more frustration she feels with the people who don’t—and the more she learns, the more personal and immediate the struggle becomes.

Ahimsa is a story about family, about friendship, and—as the passage above states—is about a fight for equality within a fight for equality. It’s a story that shows how the dynamics within and around any given political and social movement will touch everyone, regardless of age.

It’s a story that shows how working towards change in our hometown is just as important as working towards change on the world stage—and that sometimes the changes that don’t even make a blip on the radar of the world stage are the ones that have the most impact on our friends and neighbors. In other worlds, it’s about how making small, manageable changes within our own personal orbit—the sort of action that children can advocate for and achieve—really does change the world.

It provides a nuanced look at—among many other things—privilege and cultural dynamics within social justice movements. It shows well-meaning people making missteps and overstepping; and it shows that within a fight for equality, those who have the least political and social power will often be asked to not only do the heaviest lifting, but bear the brunt of the harshest response. Kelkar also considers the balance of political speech and immediate need—when Anjali’s mother burns all of their British-made clothing, it feels like a rebirth of sorts… but unlike many of the people she’s passionately fighting for, their family has the money to buy more clothing. In other words, political statements—no matter how well-meant—can be read very, very differently depending on one’s personal circumstances.

Every single one of Ahimsa’s major characters is a three-dimensional, flawed human being. They make mistakes, they are imperfect, they fail to consider all of the angles, they make faulty assumptions, they sometimes preach when they should be listening. As do we all. And not only does she do that with her own characters, but she also does a beautifully straightforward, matter-of-fact and unapologetic job of zooming her lens out and showing how a historical figure like Gandhi was and is an inspiration to some, but also a source of frustration and hurt for others.