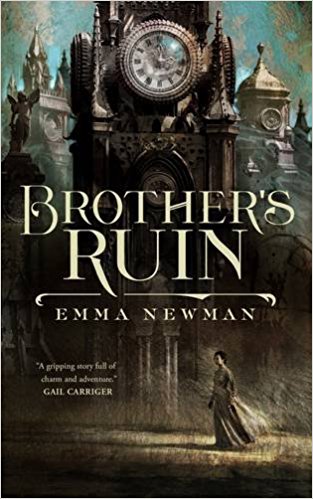 1850, England. A world much like ours but with a distinct difference: magic exists and it’s regulated by the Royal Society of the Esoteric Arts. Whenever a new mage is discovered, they must be reported. They are then tested for the type of magic they are attuned to and eventually a monetary offer is made to their family. It’s an offer that can’t be refused and the new mages are then taken away to be trained to protect the country.

Rumours abound about what happens to the mages once they join the society: that they are bound and effectively prisoners of the state. That corruption is rife within their ranks. That people can be disappeared when they join up.

Which is why Charlotte Gunn, a burgeoning yet clearly powerful mage, has decided to keep her powers a secret. And it’s not like she is new to keeping things hidden: she is also a very talented illustrator but, given her gender and the things she is prevented from doing because of it, she hasn’t been allowed to disclose who she is. And all the money she makes goes into helping her sickly brother Ben attend university since their family’s fortune is not what it once was. Worse even, their father has taken up a loan that he can’t pay and the sharks are coming knocking, knocking on their door. The only way out is for the family to have a mage so they can make money out of the Royal Society – and their father believes that Ben is the one.

This is my second encounter with the work of Emma Newman. The first was with Planetfall, a fantastic futurist science fiction novel that blew my mind away. Brother’s Ruin is a staggeringly different work – the genre, the setting, everything – showing the author’s fabulous eclecticism. I love that difference, even though the work here is a bit less exciting and fresh than Planetfall. It might be unfair to make that comparison, but having read a previous work, one creates a certain level of expectation, and it’s only fair that I at least disclose them here.

Brother’s Ruin has a lot going for it. I loved Charlotte and her disposition for getting to the bottom of things and learning the truth even against all friendly – and unfriendly – advice. Her love for her family and determination to save her brother and father from ruin are remarkable. There is a little bit of saviour complex there, but the potential for growth is incredible. Just as the bits that we learn about mages and the Royal Society are too. Are the rumours true? Is the Royal Society evil? The novella ends in a fantastic note, with Charlotte being offered the chance to do something exclusively for herself, to not only truly embrace who she is (with a sign of darkness? There is definitely a side of brewing darkness there) but also use that for what she believes to be the greater good.

This is all tantalising stuff. And perhaps this is my biggest gripe with the novella: that it feels incomplete and introductory. I guess it’s only to be expected, this being a novella and the first part of a series. But this first entry felt pain-by-numbers in the way that it showcases its familiar setting, character development, and even the romantic element, yet leaving all the cool potential to be clearly developed later.

Maybe it’s a bit crass to complain about a work’s potential, especially when we know there is going to be more coming. But damn it, I wanted to have seen it now.

In Booksmugglerish, a frustrated 7 out of 10.