If You Love Something, Let It Go 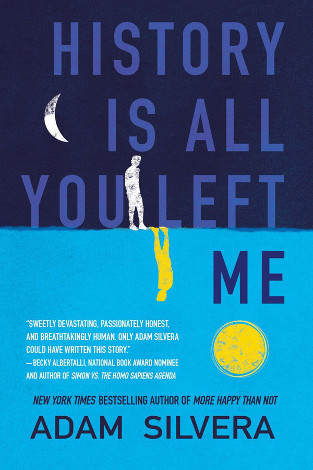 One boy walks in the night. The other, in the day. Never the twain shall meet.

Theo was Griffin’s first love. But when Theo moved to California to go to college, Griffin tested out that old (terrible) adage “if you love something, let it go.” And when Theo met Jackson and the two started dating, Griffin was heartbroken—but in his heart knew that he and Theo were endgame.

But then Theo died. And Griffin quickly realized that losing Theo to college across the country was nothing compared to losing him completely.

From practically the first page, my heart broke for Griffin. Although the smaller details of his relationship with Theo were different than my own experience, I, too, found first love in high school and broke up with said love when I moved across the country to attend college. Thankfully, my love and I were endgame (and are now married), but Griffin will never have the chance to find out if he would have had the same with Theo. I wish I could have reached through the pages and held Griffin in his time of need. He made mistakes, sure, but he was overall a really decent guy, and I’d never wish his kind of heartbreak on anyone.

The time Griffin and Theo spent together was sweet, but it lacked some depth. The book jumps into their relationship after they’ve already known each other for years, and so we don’t see their love blossom, only change into something more than friendship. And Griffin’s relationships post-Theo aren’t exactly healthy; they’re colored by grief and a need to find some control in a life that’s gone off-kilter.

Talky Talk: Past and Present

History Is All You Left Me is divided into chapters set in both the past and the present that slowly reveal Griffin and Theo’s story, both when they were first together, as their relationship progressed, the time after Theo left for college and met Jackson, and what transpired after Theo’s death. This back and forth could have made things complicated, but Silvera used the two different time periods to paint a fully realized picture of the two boys’ history and Griffin’s state of mind after Theo died.

Griffin struggles with compulsions that Theo tells him are quirks, including an aversion to odd numbers and a dislike of anyone being on his left side (so much so that he can’t ride in the passenger seat of a car). Although he mentions early on in History Is All You Left Me that he should probably talk to someone about them, it’s not until nearly the end of the book that he actually does.

I don’t know how accurately his issues are portrayed, but I found myself preoccupied by the fact that no one attempted to help him. The character traits also seemed more like an afterthought to Griffin’s character rather than an integral part of the plot. I appreciate that Silvera included such traits in the book, but feel like they could have been integrated in a more meaningful manner.

We didn’t have a great amount of chemistry, Book, but I appreciate your story and my heart goes out to you. I’d love to get together for coffee occasionally to make sure things in your life are on the up-and-up.

History Is All You Left Me will be available Jan. 17.