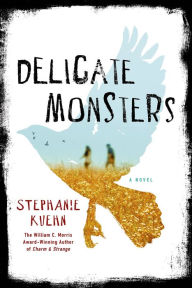 Now, after blowing through both Delicate Monsters and Complicit in one day—and starting Charm & Strange only to later have it pried out of my hands before leaving the house for a previously planned social thing*—I can say: as usual, you were all right. As usual, I don’t know why I waited so long. Yes, her books are totally and completely perfect fits for me.

More of a focus on big-time family and sibling issues than on romantic relationships? Check.

Characters who lie to themselves and to the reader? Check.

Unlikable characters who do unforgivable things, but who are so fully fleshed-out that you still feel for them even as you are rooting for them to either change their ways or receive some serious comeuppance? Check, check, and check.

Delicate Monsters, her most recent book, centers on three characters: Sadie Su, and brothers Emerson and Miles Tate. Sadie is back home in vineyard country for her senior year after being kicked out of one-too-many private schools (this time for actions that almost resulted in the death of another student). Emerson’s family has been struggling economically since his father’s death. He’s a basketball player who just wants an easy-going senior year with the Girl of His Dreams, but whose childhood acquaintance with Sadie—it doesn’t feel quite right to call what they had a “friendship”—is about to come back to haunt him. And then there’s 15-year-old Miles, whose current existence is entirely made up of round after round of mysterious medical issues, being bullied by his peers and harassed by his sparring partner in fencing, and terrifyingly violent visions of the future.

It’s a story about fractured families, about absent parents, about siblings, about how personal pain can lead to a profound lack of empathy…if the empathy is even there to begin with. It shows how cruelty can beget cruelty, but it also shows the opposite—how human connection can lead to kindness and to hope.

Complicit is about Jamie Henry, whose older sister Cate was sent away to juvenile detention for burning down a horse barn—with the horses inside—and almost killing another teenage girl in the process.

Now, Cate has been released, and she’s coming for Jamie—but based on the disturbing messages she’s been sending him, he isn’t sure if he should be expecting a joyful reunion or a knife in the back. Complicit’s plotting is more simple than the plotting in Delicate Monsters, but it deals with a lot of the same issues: a relationship between siblings, differences in economic class, denial and self-deception, gender roles and sexuality, betrayal and sacrifice, destiny and fate.

I’ve only barely started Charm & Strange, but so far, it’s leading me to suspect that it will deal with what I’m starting to think of as Classic Kuehn Themes: long-hidden secrets leading to an explosive present, complex and unhealthy familial relationships, guilt and regret and justification, privilege and need, illnesses both physical and mental.

If you like your stories dark and suspenseful and somewhat disturbing—now that we’re headed into fall, there’s really no better time—but ALSO thoughtful and emotionally engaging, do not, do not, do not miss her books. Start with whichever one sounds the most appealing—all three are stand-alones—and if you need me anytime in the next few hours, I’ll be over there in the corner, devouring the rest of Charm & Strange.

*I tried to sneak it out with me, but at this point, my husband knows ALL OF MY TRICKS.