Gods of Jade and Shadow by Silvia Moreno-Garcia 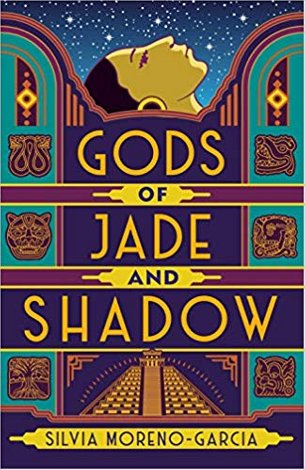 It's been my pleasure to talk about Silvia Moreno-Garcia’s works throughout the life of this column and to follow this writer’s career so closely–enraptured by her stories, in love with her characters, eager to see where she would take me next. Well, “next” is Gods of Jade and Shadow, a superb, magnificent quest story about a young girl journeying across Mexico in the early 20s accompanied by one of the Mayan Gods of the underworld.

She had a knack for quiet insurrection.

Casiopea Tun: green and untried, a dreamer who wonders about life outside the confines of her little town in southern Mexico, who wishes to be away from her abusive family and her lack of prospects. Bullied by her male cousin, fed up with life as a servant for her own family who look down on her for being half-indigenous (and with the coloring that comes with it), she is more than ready to just go away. Which is exactly what happens when she accidentally opens a wooden box in her grandfather’s room and frees the spirit of the Mayan god of death, Hun-Kamé who had been entrapped by his own brother and Casiopea’s grandfather.

Hun-Kamé: ancient, moody, detached, powerful but ailing God who wishes to go back home and take revenge on his brother and regain his rightful place. But there are parts of him missing that he needs to find. There is also a pesky piece of bone that is now inside this young girl who must help him or else they will both die.

Gods of Jade and Shadow is a multi-layered book, working on different fronts. There is lots about the power of stories and narratives and how they feed into myth-making. The narrative itself is conveyed through a removed omniscient narrator with a great voice for myth-building. There are parts of this novel that made me literally hug my e-reader. They were sigh-worthy.

“Words are seeds, Casiopea. With words you embroider narratives, and the narratives breeds myths, and there’s power in the myth. Yes, the things you name have power,” he said.

There is an ongoing conversation between past and future, between history and story and the ways that those are ever-evolving, ever-changing. As a Lord of Xibalba, Hun-Kamé is not only extremely aware of that, but seems to be particularly welcoming to change.

There is also a look at misogyny in society and religion, how there are expectations for Casiopea as a young woman and in her journey, she learns about what makes her tick. There is sexual awakening as well as a powerful development of her sense of self. This is also a story that does not look away from the intricate problems stemming from colorism within Mexico itself (a problem prevalent throughout Latin America and as a Brazilian, I recognize it).

Two things I did not expect although I should have given the author’s track record for surprising me: the beautiful, absolutely lovely romantic storyline in the story, one that is fulfilling and fitting; and the way that broken relationships are mended.

This is Moreno-Garcia’s best book to date (and that is saying a lot), and one of my favorite books of the year, period.