I'll Tell You What I Want, What I Really Really Want 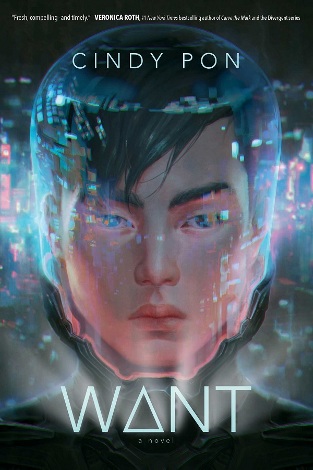 I mean...sure? The fishbowl helmet and the ambiguous futuristic background are appropriate, if not particularly exciting. Which is ironic, given how I was just talking about being happy with any representation of minorities on YA covers. But evidently, I'm not actually satisfied with scraps anymore; I'm expecting better artwork for the rare Asian boy protagonist book. And this is a bit generic.

In the near future, Earth has become so polluted that no one dares to venture outside without wearing a special suit that provides protection against the toxic air – if they're wealthy, anyway. For the unlucky many, however, rampant illness and early death are all but certain.

It's a fate that Jason Zhou and his friends refuse to accept for their beloved Taipei, and they have a plan to destroy the suit manufacturer, Jin Corp, by infiltrating the world of the elites to expose the corruption lurking within the company. But further complicating Zhou's mission are his growing feelings for Daiyu, aka the daughter of Jin Corp's CEO. Will Zhou be able to save his city without sacrificing his heart?

Despite his sudden reversal of fortunes from rags to riches, Zhou's steadfast in remaining true to himself and the plight of the lower class. He has a bit of a thrill-seeking streak, and there's nothing he wouldn't do for the people he loves. Which makes for anxious times as a bestie bystander, but there are few better to have in your corner. (Plus, you can never have too many bookworms in your life, as Zhou is one.)

Conflicted as Zhou might be over getting to know Daiyu under false pretenses, he's got it bad for her. And his friends aren't immune from their own complicated romantic entanglements, either.

Talky Talk: In the Not Too Distant Future

Want originated as a short story ("Blue Skies"), set in a future that honestly doesn't feel too far away. Sure, there's the more ambitious technology like the Jin Corp suits and airpeds (air mopeds), but air quality ravaged to the point of thick visible smog blotting out the sky is sadly not that far-fetched.

Plot-wise, the ending's a little less show and a little more tell than I prefer. But as the first half of a duology, it manages to justify the need for a sequel without ending in too much of a cliffhanger.

Taiwan's capital city doesn't get featured in YA very often, but Pon makes the most out of it here, with plenty of real and recognizable landmarks.

Zhou's found family isn't quite as lighthearted as Danny Ocean's crew – vastly different stakes, after all – but they do each have their areas of expertise.

The very first scene takes place in a night market, establishing early and often that there will be much tastiness. (Why isn't this book bundled with snacks?!)

Rekindling our affair from another life, this book is all too timely for reflecting upon the consequences of humanity's impact on the Earth. I'm definitely down for a second date with this series, because there's so much more to this world that I'd like to explore.

Want will be available on June 13th.