Notes from My Captivity by Kathy Parks 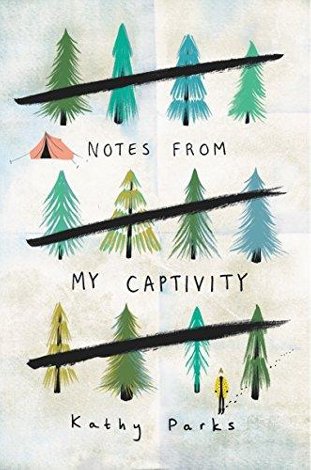 —Notes from My Captivity, by Kathy Parks

Seventeen-year-old Adrienne Cahill is heading off to the wilds of Siberia with her anthropologist stepfather in search of a mysterious—and possibly magical—family that is rumored to live there. They have very different goals: Dan is looking to save his career and salvage his reputation by finding the Osinovs; Adrienne is looking to prove that they DON’T exist in order to bust into journalism and win herself a scholarship to college.

The expedition has a shadow over it from the beginning: Adrienne’s mother has a foreboding dream; Dan sees a ghostly child standing in the road on the way to the airport; Dan’s preferred Russian wilderness guide can’t—or won’t—participate. And that’s before they even head out.

Once they’re out in the middle of nowhere, it goes from bad to worse to full-on Horror Movie, and Adrienne ends up a prisoner—a prisoner of the family that she thought was just a fairy tale.

It’s a survival story: girl against nature and the elements, girl against—and then within—a suspicious group of people who may or may not be planning to eventually murder her. But more than any of the physical danger and hardships, it’s a survival story about grief, and about how unprocessed grief can turn toxic.

But what did I think, right? Well, I have Mixed Feelings.

On the plus side:

It’s compelling and well-paced and it’s narrated by a character who is believably complicated and believably flawed—she’s smart and quick-witted, and she thinks that she’s much more mature than she is, which feels particularly refreshing, as that’s a specific character trait that I don’t see all that often.

Another thing I realized I don’t see often? Female main characters who suffer injuries that adversely—and permanently—affect their appearance. A broken arm will heal, but a tooth getting knocked out is a whole different story.

Parks shows the frustration of language barriers really well—she makes you feel it—and she also makes you feel the pure delight that the characters take in their small victories, the moments in which they understand one another. And she does a Captive Romance storyline without making it gross.

On the minus side:

While it feels true to the character—and feels emotionally true given her plan to use her Feminine Wiles to win over one of the Osinov brothers in an attempt to escape—Adrienne’s slut-shaming gets real old, real fast. This is just one of many examples:

Maybe I’ve been too aggressive. Came off like those girls at parties you find draped all over the football players. The ones the other girls talk about.

Ditto her heteronormative mindset and her immediate assumption that both brothers are straight.

Submitted without a major spoiler: I don’t think you can order someone to forgive someone else.

And—this is silly, but I just can’t get it out of my head—it is incredibly difficult for me to imagine a child thinking this intently about her parents’ kissing technique?

The two men have different kissing styles. Dad turned his head a certain way, used his hands more. Dan still looks awkward doing it, like he’s on a first date.

In addition to running a library in rural Maine, Leila Roy blogs at Bookshelves of Doom, is currently serving on the Amelia Bloomer Project committee, hangs out on Twitter a lot—possibly too much—and watches a shocking amount of television. Her cat is a murderer and now she kind of has a pet squirrel?