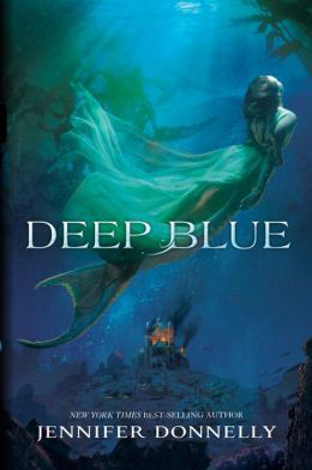 In reading the Prologue to Jennifer Donnelly’s Deep Blue—a description of a group of water witches swimming around, chanting rhyming couplets about six chosen ones with disparate talents who will have to band together to save the world—I got the distinct impression that not only had the book been specifically written with a film adaptation in mind, but that I had already SEEN said movie many, many times before.

Fifty or so pages in, I flipped to the back to be sure that it was really written by the same Jennifer Donnelly who’d written the phenomenal and beautiful A Northern Light. (It was.)

At the hundred page mark, I reread the back cover of the advance copy, which makes mention of the $500,000 marketing campaign that Disney is throwing behind this book, the first in a planned series. As I slogged my way to the end—if nothing else, I can say that I gave it a fighting chance and read the whole thing—I felt like I was being attacked by an endless barrage of advertising, as if Donnelly was writing from a checklist of items to be shoehorned in there. And now, after doing a little bit of research, I don’t think my instincts were entirely off: Apparently, the Waterfire Saga is going to be the cornerstone of a “worldwide franchise” that will offer an “impressive range of companion content opportunities and promotional partnerships across the Walt Disney Company.”

Beyond all that, you’re asking, how is the book?

The characters are two-dimensional. Serafina, the first mermaid princess we’re introduced to, is the Leader Who Needs to Learn to Be a Leader. Her best friend, Neela, is the underwater equivalent of Bess Marvin. Much later, we are introduced to the other four: a Blind Seer, a Blunt Linguist, a Smart Girl (You know she’s smart because she wears glasses! Underwater! Wouldn’t goggles work better?), and an Emotionally Wounded Warrior. Points to whoever came up with the cast—I don’t know if it was Donnelly or Disney—for putting together such a culturally and ethnically diverse ensemble. At the very least, it makes imagining them all as a future line action figures that much more pleasant.

There is no emotional core. None. Nada. Zilch. Deep Blue is all about introducing the overarching plot, the characters (not to mention lots of details about their clothes, because I’m totally sure that long floaty dresses wouldn’t impede swimming or anything), and the world. We are told about the emotions that Serafina et al. have, but we never feel anything.

The worldbuilding is abysmal. I’m truly not sure that I can convey how poor it is: It is trainwreck-bad, so bad that I felt (oddly enough) personally insulted by it. The vast majority of merfolk—points again, actually, to Donnelly or Disney for providing a broad array of merfolk, some have the bottom half of fish, some of crabs, seahorses, etc.—have no contact with the human world, yet they use our slang and idioms. Sometimes, they use them straight up: “Sit tight,” “Dial it back,” “We’re out of here,” “I’m checking into rehab”; and sometimes they simply replace verbs or nouns with water-based words: “We don’t swim on ceremony,” “Swims with a fast crowd,” “I put my fin in my mouth,” or, my personal favorite, “Always the one with the lampfish on his head.” Time is told in hours; distance in yards; they have crazy catfish ladies; they refer to our countries by name (when they look at all humans as bad news, why would they differentiate between COUNTRIES?); in addition to Mermish; they speak our languages (again, WHY?); they drink drinks out of teacups (HOW DOES THAT WORK?); and they have tulle. TULLE!

Add to that inconsistencies in tone—it varies wildly from high fantasy to Gossip Girl—and the ultra-preachy environmental message and, wow. While the magpie in me thinks some of the spin-off products might be kind of cool, I can’t recommend the book itself.