This Isn't Your Typical Kissing Book 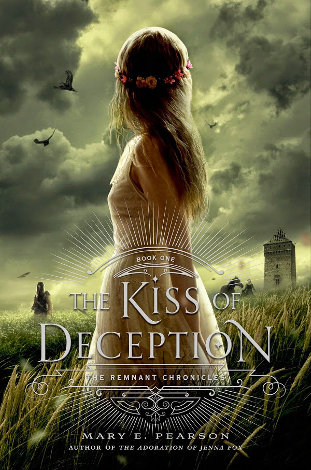 BOOK REPORT for The Kiss of Deception (The Remnant Chronicles #1) by Mary E. Pearson

Although this cover is likely supposed to elicit feelings of epic fantasy from the reader, to me, the odd angle the girl is standing at and the faceless people in the background look a whole lot like something out of a horror film. It’s a little creepy.

The life of a princess isn’t always easy—particularly when you’re about to be married off to the son of a neighboring kingdom, a son who you’ve never met or even seen. For Princess Arabella Celestine Idris Jezelia (Lia for short), the First Daughter of the House of Morrighan, it’s the last straw. So, on her wedding day, Lia and her maid Pauline set out for a distant village, one where they’re hoping they can find a fresh start.

When you’re the First Daughter, however, escaping isn’t really possible. Not only does Lia’s father put a bounty on her head, but also the jilted prince, who’s not even close to being the ugly old toad Lia had imagined, and an assassin from a barbarian tribe, who’s got a hidden past, set off in search of her. Little does Lia know that the two mysterious men she meets in the tavern will change her life forever…but for better or worse remains to be seen.

Lia is a bit spoiled and doesn’t often think before she speaks. However, these are minor faults in a woman who’s also not afraid to stand up for her friends and loved ones, who will work hard regardless of the menial nature of the task, and who doesn’t expect anything to be handed to her for free. Additionally, Lia might have grown up as a princess, with all the trappings that come with the role, but having three older brothers has made her a bit of a tomboy; she’d much rather practice throwing knives than doing needlepoint. All of which add up to a person I’d love to be friends with.

When Lia meets the Assassin and the Prince in the tavern, both appeal to her, for different reasons, even though Lia doesn’t know the truth about either of them; she thinks one is a farmer and the other a trapper. They’re both attractive, natch—this is a YA book, after all—but it’s their mysterious natures and their attentiveness that appeals to her most. One of them soon catches more than her eye*…but I won’t tell you which guy, #becausespoilers.

*I meant her heart, guys. Get your minds out of the gutter.

In The Kiss of Deception, Mary E. Pearson has taken us back to the time of kings and princesses…in the distant future. The novel’s backstory is filled with references to a previous time of men who thought they were gods, who nearly destroyed the world because of their hubris, and the relics and ruins they left behind. (e.g., “In the far distance I saw the lone red spire of Golgata, its single crumbling ruin all that remained of the once massive bridge that spanned the vast inlet.”) The book is much more a fantasy novel than a dystopia, however, but the little glimpses of the world that was make for interesting worldbuilding.

Pearson divides the chapters up between the three main characters (with one random Pauline chapter thrown in at the end). The twist here is that while it’s obvious which chapters belong to Lia, the other chapters belong to the Prince, the Assassin and the characters Kaden and Rafe…but who the Prince and the Assassin are isn’t known until more than halfway through the book. It sounds a little confusing, but Pearson pulls it off really well.

There’s a little bit of magic running through The Kiss of Deception, but it’s less of a wizard/witch type of magic and more of a sixth-sense, mystical type of magic. As this is the first book in a series, the magic is touched upon only briefly, but I can see it becoming a more integral part of future books.

Although The Kiss of Deception doesn’t leave the reader hanging with a massive cliffhanger, I still really wanted there to be more to read when I got to the end. I should be used to this feeling by now, but I’m really annoyed that I have to wait to read more.

You’re not at all what I expected, Book. Before we began, I was worried about how your dystopia-meets-fantasy plot would work, but I quickly found you both exciting and refreshing. I hope you don’t think this is coming on too strong, but…it’s rare that after only one date I want to introduce a book to all of my friends, and with you I find myself already planning a future. I hope we can get together again very soon.

The Kiss of Deception is available now.

Mandy lives in Austin, TX, where she's an editor/writer for an educational non-profit by day and a pop culture junkie by night. When she's not ensconced in a book forForever Young Adult, Mandy can be found swooning over superheroes, dreaming of The Doctor and grinning at GIFs.