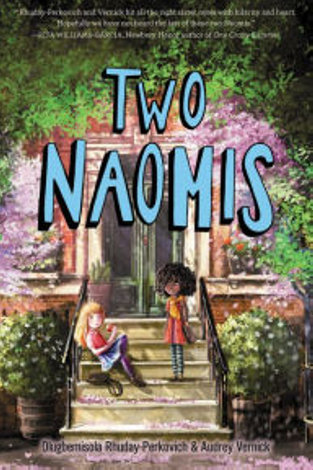 It’s been two years, and it doesn’t feel weird anymore having Dad live somewhere else, especially since somewhere else is only five blocks away. Sometimes we even run into him at the grocery store, and even though he and Momma don’t hug or anything, they are polite and not screaming and throwing eggs like I heard Meg Kelly’s parents do.

Ten-year-old Naomi Marie and her four-year-old sister, Brianna, primarily live with their mother, but since their father just lives a few blocks away, they see him all of the time. Also, it’s been two years since the split, so they’ve had a while to adjust to the change. For ten-year-old Naomi E., the situation is very different: it’s only been three months since her parents separated and her costume designer mother moved out to California, so all of their recent interactions have been via Skype and text message. She misses her mother. A lot.

Now Naomi Marie’s mother is dating Naomi E.’s father, and it’s starting to get serious. The parents are eager for the two girls to not only get to know each other, but to get along and become friends—but sometimes, the more you get pushed in a certain direction, the more you feel like resisting.

A few specific things that I loved:

Naomi Marie’s voice. Both girls’ voices are distinct and true, but in looking back at my notes, it was Naomi Marie that I highlighted, every single time. Her need to excel, her Big Sister moments (Now it’s my turn to smirk, but I don’t because I’m mature. I just do it in my head.), her occasional overdramatics (“And we were going to the museum to do research for our project,” I say. “Now we’ll get a bad grade, and we won’t go to college. Everything’s ruined.”), her sense of humor, her love of puzzles and board games and clubs and libraries had me grinning from the first page to the last.

Which isn’t to say that I didn’t love Naomi E. as well! She’s much more buttoned down, she takes longer to wrestle with her feelings and to talk them out, and she’s dealing not only with the immediacy of her parents’ split, but with suddenly feeling like one of three daughters, rather than an only child—lots of readers will identify with her. And she’s plenty funny, too. When their parents want to figure out how to verbally differentiate between the two of them, she blurts out, “I guess it’s soooo hard for you to tell us apart!” which is one of the first direct mentions—other than Brianna referring to Naomi E. as White Naomi a few times—of their different skin colors, leading to one of their first moments as a Unified Front Facing The Grown-ups, as narrated by Naomi Marie:

I was wrong. She doesn’t bite her lip when she’s mad; she gets really red. Really. But the idea of anyone not being able to tell us apart is kind of . . . funny. Before I realize it, I let out a giggle.

She looks straight at me. And grins.

The books! Oh, the books!: The Naomis are both huge readers, and Naomi Marie’s mother is a school librarian. There are tons of books—GREAT BOOKS—referenced, so many that it would be easy to create a Two Naomis reading Challenge. Here are some of the titles I caught: The Trouble with Half a Moon by Danette Vigilante, Breadcrumbs by Anne Ursu, One Crazy Summer by Rita Williams-Garcia, From the Mixed-Up Files of Mrs. Basil E. Frankweiler by E.L. Konigsburg, The Great Wall of Lucy Wu by Wendy Wan-Long Shang, The Jumbies by Tracey Baptiste, Tea Cakes for Tosh by Kelly Starling Lyons, and Viva Frida by Yuyi Morales. Based on my love of the books on that list that I have read, now I want to read the rest!

The Naomis’ best friends, Xiomara and Annie: It’s so easy to see why the Naomis adore their best friends: Xio and Annie are both a joy to be around. They’re both more interested in meeting their best friends’ counterparts than the Naomis are in spending time together, and their Opposites Attract friendships—neither Xio nor Annie are particularly interested in books, for one—show just how similar the Naomis really are. ALSO, when the four of them finally spend some time together, the new quad jells in a way that, again, will warm the coldest of hearts:

Annie starts. “It’s just . . . your parents—”
“—they were really looking at each other,” blurts out Xio.
“So?” says the Other Naomi.
“Xio, you know Momma believes in eye contact,” I say.
“I mean really looking,” says Xio. “Like on those book covers in the teen section.” She turns to Annie. “Which is the only section that looks interesting.”
“I know, right?” says Annie.
The Other Naomi and I share an eye roll.