Is White Rabbit for You? (Probably) 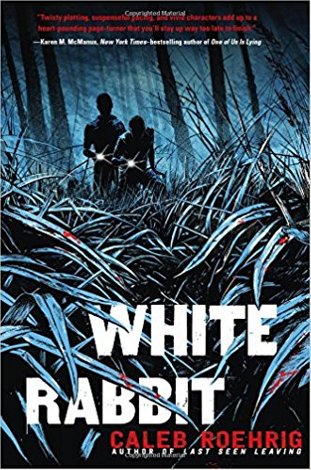 “You’re smart, Rufus, everybody knows it. Remember when we were in that summer reading group thing, and you solved all those little mysteries or whatever? Maybe you can figure out what happened tonight!”

“April, I was eleven,” I splutter, appalled, “and they were just a bunch of dumb riddles with the answers already built in!”

Rufus Holt is in the middle of an Extremely Fraught conversation with his ex-boyfriend when he gets a panicked—and frankly terrifying—phone call from his sister, April. So he and Sebastian hit pause on their own drama in order to figure out what’s going on with April… but when they find her, they realize that maybe hashing out their ugly breakup would be preferable to DEALING WITH AN ACTUAL MURDER.

ESPECIALLY given that it’s a murder that April might have committed?

If you’re a fan of twisty mysteries, White Rabbit is for you. I am legendarily* good at solving murder mysteries, and this one kept me guessing right up until the end.

If you swoon over up-all-night romances, White Rabbit is for you. Rufus and Sebastian’s past is painful for both of them, and they have a lot to work out, but it is clear from the very beginning that they A) are a great fit, B) are still very much into one another, because C) the SPARKS, they FLY. It would be entirely impossible to not root for them from the very first page, and that’s half of the fun with romances.

If you love descriptions along the lines of “...Race is the McMansion equivalent of a person: pompous, generic, and transparent in his need for admiration,” White Rabbit is for you. (Bonus points to Roehrig for the Rich Kid Names in this book, which are hilariously On Point.)

If you’re a sucker for the classic noir Outsider Hero; the classic detective story arc of tracking down and questioning suspect after suspect after suspect, all of whom provide contradictory accounts when they’re not outright lying; and mysteries that really do provide the information you need to solve it before or along with the hero, then yes, you guessed it: White Rabbit is for you.

If you like stories that deal with class hierarchies in everyone-knows-everyone towns; stories about the seedy underbellies of supposedly idyllic communities; stories that feel cozy in their usage of traditional structure but modern in their sensibilities, White Rabbit is for you. It’s that very last element that really made this book a home run for me—stories that work as Comfort Reads while also feeling fresh and surprising are few and far between.

And now, of course, all I want to read are books that give me that same feeling.

I wasn’t familiar with Roehrig before picking this one up, and I enjoyed it so thoroughly that I ordered his previous book before I even sat down to write this. While I wait for it to arrive, I’ll tide myself over by re-reading Sherri L. Smith’s Pasadena, reading the Lamar Giles books I haven’t read yet, and finally sitting down with Maureen Johnson’s Truly Devious, which I’ve been saving for exactly this sort of emergency.