Julia Has Things Under Control 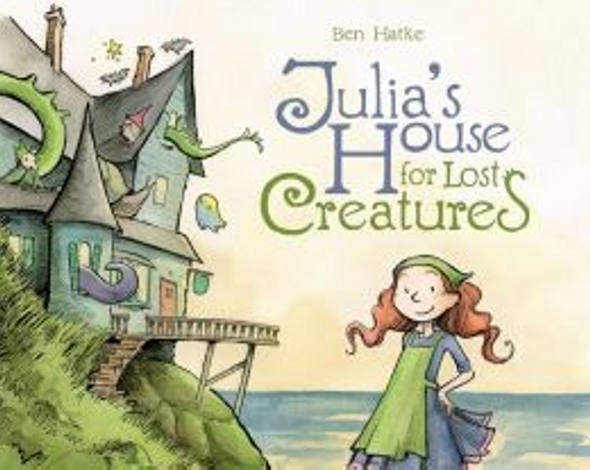 Misfits, gather ’round. There’s a new picture book just for us, Julia’s House for Lost Creatures by Ben Hatke, best known for his graphic novel trilogy, Zita the Space Girl. (Each one of those books received a starred review from Kirkus.) It’s scrappy, this entertaining little tale of Julia and her new friends.

The title tells you the basics here—there will be a house, and it will be a safe haven for lost creatures—but the first line tells you that you’re in for a special kind of house: “Julia’s house came to town and settled by the sea.” The title page spread just before this shows us this delightful image: A large, ramshackle house lodged on the back of a giant turtle, who is creeping along to a shoreline. Look closely, and you’ll see the tiny figure of Julia herself, dress blowing in the breeze, standing on the house’s railing, as if leading this wonderfully bizarre voyage.

Julia settles down in this new location but soon finds that things are altogether too quiet. After making a sign to hang by the front door, one that echoes the book’s very title, all kinds of creatures show up to move in. (First is Patched Up Kitty, who can walk up walls, no less.)

The story itself isn’t unconventional in any way (nor does it need to be). But the characters and setting are. It’s a “very sad troll” who shows up after Patched Up Kitty, not to mention goblins, a ghost, a mermaid, and even “foletti,” Hatke writes. This is, as best as I can figure, the Italian word for gremlin-esque, elflike creatures, but I love that the book made me want to go look that up.

And let me tell you about this comfy house: It’s one I’d like to move into myself, thanks very much. This rustic, cozy home has teapots, plenty of books, art on the walls, and even a Victrola. Julia’s got style. Hatke does a splendid job of bringing the setting to vivid life, and he knows when to slow things down with an effective use of white space, as well as panels. The book’s sound effects—the onomatopo

eic “boom”s and “scritch”es and “scratch”es and “bellows” (think: Julia running to the door as these sounds emanate just beyond it)—bring about compelling page turns and make this one a fun read-aloud.

What we also have here is a story (with abundant heart) about problem-solving. Julia’s happy to take in these creatures, but she soon discovers that they’re taking over her home and leaving giant messes in their wake. After she yells and dismisses herself to her workshop for a self-imposed time-out, she re-emerges with a handy chore chart, and everyone gets to work. I’d be lying if I didn’t say, as a mother myself, that I like how the story reinforces—in a way that doesn’t come across as didactic—the importance of cleaning up after yourself already. (A parent can only say this so much. A really fun and compelling story involving dragons and grumpy trolls will help boost your case.)

There are no parents in sight in Julia’s world. We don’t know if she even has any, nor do we need to. She’s got everything under control just fine. (Just as Zita does.) Many children will find it a little bit thrilling to read about her adventurous spirit. She’s intrepid, this red-haired young girl with a generous spirit. (I just so happen to like that her generous nature is balanced by the understanding that Victrolas are not to be messed with AND if messes aren’t cleaned up, why then, what is the world coming to anyway?)

Perhaps the best thing about this book, on shelves in early September, is that it may lead those who fall for it, as I did, to Hatke’s Zita trilogy, which is, in the words of a Kirkus reviewer, “utterly bewitching.”

It makes me wonder what Hatke’s got up his sleeve next, but something tells me I’m likely to be entertained.