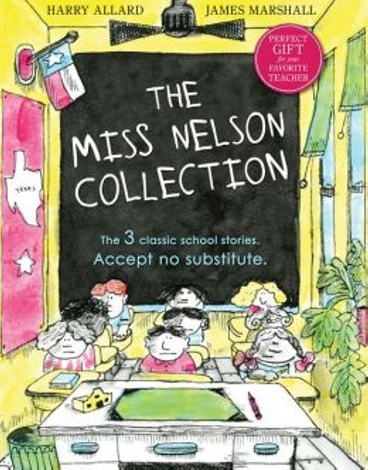 Viola Swamp. If you’re a child of the ’80s, you know her and, most likely, know her well. She is the star of James Marshall’s Miss Nelson Is Missing! This beloved picture book, published in 1977, tells the story of the sweet and mild-tempered teacher, Miss Nelson, who puts the rogue students of Room 207 in place by posing as Viola Swamp, the no-holds-barred and no-nonsense substitute teacher, complete with unruly black wig and green- and yellow-striped tights. (Let us not forget the monstrous black mole on Swamp’s chin.) At the beginning of next month, Houghton Mifflin Harcourt will release The Miss Nelson Collection, which includes Miss Nelson Is Missing!—as well as the two stories that followed, Miss Nelson Is Back (1982) and Miss Nelson Has a Field Day (1985).

(“The 3 classic school stories – accept no substitute,” the publisher notes on the book’s cover. Come on. You gotta hand it to ’em. It is a clever tag line.)

At the end of Miss Nelson’s first adventure, that 1977 story that kicked it all off, the students are so relieved to see their coy teacher return. Ms. Swamp, after all, prohibited story hour, made everyone sit still, and loaded them down with homework. She was hard-core, truly. No spitballs permitted. Marshall never tells readers that Miss Nelson concocted this elaborate deception. We only see “Viola’s” black dress hanging in Miss Nelson’s closet at the close of the story, while the demure, always-blushing teacher giggles to herself, making this the go-to story for elementary-grade language arts units on inference in literature.

No follow-up story quite ever reached the sheer glory that was Miss Nelson Is Missing! (with apologies to Principal Blandsworth of the second book, who does possess an unforgettable necktie, and the Smedley Tornadoes of the third book, whose story is a triumph of redemption). Viola Swamp is so iconic that, should you visit elementary schools during the month of Oct

What makes this book so wonderful? Well, a lot of things do, and James Marshall was a brilliant light in children’s literature (needless to say at this point, I’m a fan), one whose comic timing was spot-on and whose seemingly simple cartoon work belied a sophistication easily dismissed by those in a hurry.

James Marshall and Maurice Sendak were good friends and big fans of each other’s work. Sendak, in many interviews during his lifetime, expressed his admiration for the Grimms’ fairy tales and the behave-or-else mentality inherent in the stories. I think that’s one of the primary draws to Miss Nelson’s tale: This quiet, diffident teacher takes matters into her own hands—this unforgivably atrocious behavior—and nips it in the bud. Behave—or else, she tells them through the guise of Viola Swamp. Those children had it coming, and child readers recognize this. And I think, subsequently, they delight in Miss Nelson’s triumphant defeat of the classroom wrong-doings, even if when the story begins, they also delight in the dastardly behavior of the students. (I mean, REALLY: They make faces right at Miss Nelson, they stand on their heads during story hour, and they flat-out refuse to do their work. Dreamy, huh?)

I don’t think such a story would fly today. There’d perhaps be too many parental complaints about the atrocious children, as well as the “very unpleasant” sharks eating children in one illustration. Oh, and heaven forfend, Detective McSmogg (assigned to find poor Miss Nelson) smokes a PIPE at his desk.

Thank goodness for the loosely regulated world of late-1970s’ children’s books, where a teacher who had had ENOUGH, thanks very much, could turn herself into a “real witch.” Today, Miss Nelson would be too busy trying to figure out Common Core to get her evil-twin outfit together.

Long live Viola Swamp, I say. And something tells me she will.