Love, When You Least Expect It 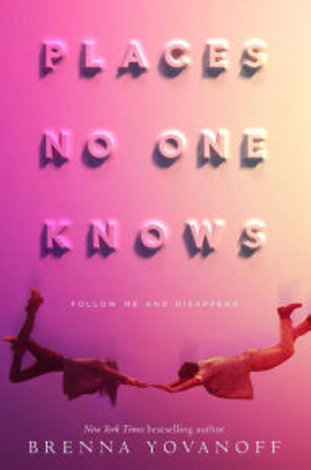 I shake my head. “I quit in junior high.”

“You were good, though, right?”

We stand there looking at each other over the carved-up benches. She’s wearing so much eyeliner that it’s starting to flake off in waxy pieces, like crayon.

“You didn’t quit,” she says finally. “You just found yourself a bigger board with fancier pieces.”

—Places No One Knows, by Brenna Yovanoff

Generally speaking, the more I love a book, the harder it is for me to talk about it.

So being even remotely articulate about Places No One Knows is going to be borderline impossible. Buckle in!

Waverly Camdenmar used what she learned from Machiavelli and Sun Tzu to catapult her best friend into the Queen Bee position at their high school. In her own words, she is: Maribeth Whitman’s blank-faced vizier, high priestess of precalculus. Her quiet mercenary, her black cat. The girl who needs help remembering how to smile. I am Maribeth’s ever-watchful familiar. She, beloved by multitudes. Me, beloved only by her. She earns grades at the top of the class, leads the pack on the cross-country team, volunteers in the guidance office, has a comfortable home life. And try as she might, she can’t sleep more than a few restless hours a night.

Marshall Holt, meanwhile, has no problem sleeping—on the rare instances that he makes it to class, he usually falls asleep. He spends most of his time drunk or stoned or both, his home life is a disaster, he’s well on his way to not graduating, and as far as he’s concerned, it doesn’t matter.

They have nothing in common—Waverly is hardly even aware of Marshall’s existence—but now, out of seemingly nowhere, they are connected—because lately, every time Waverly falls asleep, she ends up wherever Marshall happens to be.

I sat here on my couch and read this book and I wept. Sometimes, just tears leaking out of my eyes, sometimes full-on gasping sobs, and occasionally, full-on gasping sobs that turned a corner into delighted laughter. The emotion that Yovanoff taps into doesn’t come from the plotting—the arc of the story doesn’t include any horrific plot twists, unexpected deaths, or dramatic tragedies. Instead, she highlights the everyday pain that we try to hide from each other and from ourselves. The empathy that she writes with is amazing—to read this book is to feel understood, and to feel understood to a degree that is both uncomfortable and affirming.

For instance, from one of Marshall’s chapters: Once, when I was twelve or thirteen, Annie told me that other people didn’t feel things the same way I did. They don’t get a stomachache from watching the news or feel like crying when other people are sad. This is an especially personal example, and I have no doubt that other people will gravitate towards other moments and other passages. But, to explain: I am almost 40 years old, and I’ve been mocked for being “overly sensitive” for pretty much my entire life—while I see the humor in my inability to NOT CRY at random McDonald’s commercials, seeing the humor in it still doesn’t make the sadness go away. This is the first time I’ve ever experienced a character reaching out of a book to say, “You’re not the only one.” (And somehow, so many people still don’t understand the power and importance of representation!)

It’s been years since HBO’s Deadwood was cancelled, and I still get choked up when I try to explain why that show so regularly wrecked me on an emotional level—because in a world of mud and blood and violence and amazing, amazing profanity, every once in a while, a character would perform an act of kindness. And contrasted with the pretty constant anguish and trauma that those characters were dealing with, that moment of kindness would shine so bright that it physically hurt. That’s exactly how Places No One Knows made me feel—which is weirdly appropriate, because what are the teen years if not a modern version of Deadwood, socially and emotionally, inside and out?