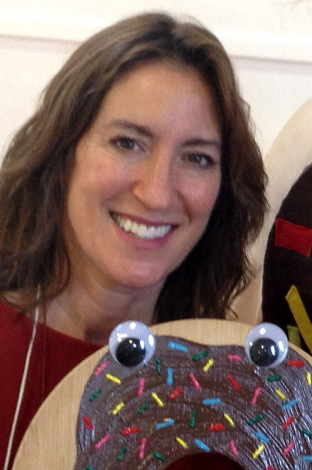 Back in 2007 in an interview at my site, Newbery author Jack Gantos stated that, if he thinks he could write a picture book as fabulous as Laurie Keller’s Arnie, the Doughnut, he would be very satisfied.

When you meet other fans of this 2003 picture book, the tale of a chocolate-covered doughnut undergoing his own personal existential crisis, they have just as much cultlike fervor for the book. Such fans will be happy to know Keller has taken Arnie’s story further in a new set of chapter books, called The Adventures of Arnie the Doughnut, which all kicked off last year. The second in the series, released in February, is Invasion of the Ufonuts.

I snagged some of Laurie’s time to ask her what made her want to further Arnie’s story and just how hard it is to populate her books with the offbeat jokes she’s known for.

What exactly made you want to tell more stories about Arnie?

I had never planned on writing more stories about Arnie, even though kids always asked me to. Most questions and comments during any Q&A portion of a school visit would be about Arnie, and there were even times when an “Arnie! Arnie!” chant would break out. I guess I just figured he was settled happily as Mr. Bing’s doughnut-dog and that was that.

The thing I was planning to do was develop some new characters for an early chapter book series. I loved the thought of being able to tell a longer story with more room for jokes, which still incorporated a lot of pictures. I was playing around with ideas when my editor, Christy Ottaviano, suggested I try writing some early chapter books about Arnie. She’d been to a couple of my school visits and saw how kids responded to Arnie and thought it might be fun to give him some more adventures in a new format.

At first I wasn’t so sure about it, mainly because I had turned him into a doughnut-dog, which seemed too limiting story-wise for a series. But Christy said she didn’t think I needed to keep him in the confines of his previous world. She knows how much I love the zaniness of Peewee’s Playhouse with its offbeat humor and cast of wacky characters that pop in from show to show, so she told me to think of it like that. That really helped free up my brain, and at that point my mind started reeling with the possibilities.

The books have been praised for their slapstick humor, and the New York Times Book Review even called you "a goofball and a genius." At the risk of doing that annoying thing that is analyzing humor (sorry!), I’m curious: How hard is it to write such slapstick jokes?

It’s tricky to try to guess what kids will think is funny, so I usually just write what I think is funny and hope that they’ll think so, too. Sometimes silly lines will come to me right away, but other times it takes me weeks to get the right “angle” or “voice” that I’m looking for. Watching movies that make me laugh helps—like Monty Python and the Holy Grail (talk about slapstick!), Strictly Ballroom, The Jerk, Airplane!, Young Frankenstein and anything by Christopher Guest. If there are parts I’ve written that aren’t as funny as I would like, I can’t always pinpoint what isn’t working right away, but eventually the right mood hits and I can usually figure out how to fix it.

The biggest challenge with the early chapter books is that they’re geared toward the more independent reader, so my approach had to change. In my picture books, I include all sorts of jokes and asides that aren’t necessarily a main part of the story—they can be anything from bits of extra information I want to include (things that didn’t fit well within the story) to goofy jokes that help develop a character’s personality. Occasionally, I’ll throw in a joke that I know kids won’t always “get,” but adults reading with them will. In any case, if they’re read (or not) or even understood, it doesn’t affect the storyline. But with this new format I knew that the jokes would be front and center and that kids would most likely be reading them on their own, so I needed to be as sure as I could that kids would appreciate or, more importantly, understand them.

What has been the reaction from children at school visits?

I do quite a few school visits, and when I started telling kids that I was writing a chapter book series about Arnie, they definitely did lots of hootin’ and hollerin’. I don’t have children of my own and I don’t “test” my stories on kids before they’re published, so I had no idea how anyone would respond to them.

I ever showed Bowling Alley Bandit (the first in the series) to kids was just before it was published and I read a chapter at a school visit. I was so nervous waiting to see if they laughed at the parts I hoped they would, and when they did I was so relieved. I always ask kids if they have ideas for future Arnie books, and before I have the question out of my mouth their hands pop up with scenarios they have in mind. (How do they do that so quickly anyway?) It’s been very fun. People have sent me pictures of children really engrossed in the books, and it makes me so happy. And I love when kids run up to me or email me to tell me their favorite lines. As a writer, it doesn’t get much better than that.

But I think the most surprising and rewarding thing is when I hear that a struggling or reluctant reader latches on to them, and it’s the first time they’ve read a book start to finish. That just makes my heart melt, and I only wish I could produce them faster.

I’m working on the third Arnie chapter book right now. I’m at that “trying to get the right voice” stage, so I just watched part of Monty Python and the Holy Grail yesterday for inspiration. (Don’t be surprised if Arnie cracks a disparaging joke about someone’s mother or father as a result.) I haven’t settled 100% on the title yet, but the premise is that Arnie and Peezo compete in their favorite reality show. (It’s super dorky and involves…burping). During their rigorous training for the show, they think they’ll be competing as teammates, but when the big day arrives they learn that the rules have changed and will now be competing against each other. (DUN DUN DUN!)

I’m also zeroing in on a couple picture book ideas and trying to figure out how I can give up sleeping and eating as to free up some more time to make more books.