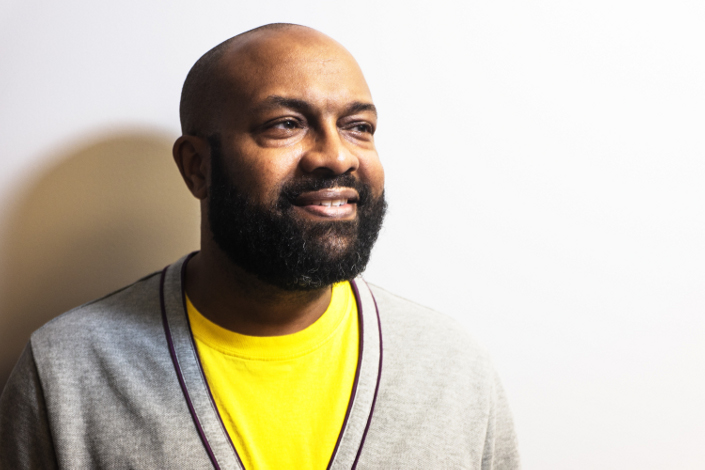 “I preached to my birds just about every night. I would get them all into the henhouse, settle them onto their roosts, and then stand in the doorway and speak to them, reciting pieces of the Bible, the same verses I memorized for Sunday school. They would sit very quietly, some slightly moving their heads back and forth, mesmerized, I guess, by the sound of my voice. I could imagine that they were my congregation. And me, I was a preacher.”

Those are the words of Civil Rights leader John Lewis from his book, Walking with the Wind: A Memoir of the Movement, published in 1998. It was this moment of Lewis’ childhood that inspired author Jabari Asim to write Preaching to the Chickens: The Story of Young John Lewis, illustrated by the great E. B. Lewis and on shelves this week. Back in May here at Kirkus, I mentioned this one in a Fall picture book preview, and it remains one of my favorite picture books thus far this year. In the book, Asim shows us but one aspect of the legendary congressman’s childhood, and by doing so he eloquently captures the man who grew up to “speak up for those who can’t speak for themselves,” just as he did for the chickens, whom he not only preached to but kept from being traded to neighboring farmers.

Given that Asim—former deputy editor of the book review section of The Washington Post and recipient of a Guggenheim Fellowship—currently serves as executive editor of The Crisis, the magazine of the NAACP; teaches literature and writing at Emerson College in Boston; and writes plays, poetry, and books for both adult and child readers, I feel fortunate I was able to grab a moment in his busy schedule to ask him about this new book celebrating the congressman.

When did he know, I wondered, that he wanted to focus on this one particular story from Lewis’ childhood? There was no question, he tells me, that this would be the story he would share. “Representative Lewis,” he tells me, “has long been one of my personal heroes, and I had devoured his memoir, Walking with the Wind, from cover to cover. There are many moments in it that I found especially moving and instructive, but his recollection of preaching to the chickens on his family farm resonated quite strongly with me.”

Needless to say, Lewis’ memoir served as not only inspiration but also source material for Asim’s picture book. But he’s also had several opportunities to hear the congressman speak, including in 2004 at the National Book Festival, where Lewis spoke about his childhood on a farm in southern Alabama. “I relied principally on his memoir [for research],” Asim explains, “and my memories of being in the audience during some of his personal appearances. I have been fortunate to hear him speak at least three times. I think of him as one of the last representatives of the golden age of civil rights oratory.”

The picture book is what Kirkus calls in its starred review “joy-inducing.” Indeed, it is. “Little John Lewis loved the spring,” the book opens, because “it was the time the whole planet came alive.” The young John was in charge of the chickens, and not only was he glad for that responsibility, but he also worked hard, along with his family, to take care of the farm. He loved church, trusted God, and “felt the Holy Spirit rocking the room” at church services. This is all brought to vivid life via the paintbrush of award-winning illustrator E. B. Lewis; the indelible image of Lewis ministering to the chickens in his yard (“They swayed to the rhythm of his voice”) is the same one that graces the book’s cover.

To see E. B.’s artwork for his text Asim describes as amazing. “I first met E.B. at a Children’s Book Guild event in Washington, D.C. many years ago,” he says. “I hadn’t yet published any books, but he was gracious and approachable. He signed a poster for me, and I remember thinking that it would be wonderful to work with him someday. When I first saw the pages, and they are as brilliant as anything I’ve seen him do, they took my breath away. It’s hard to describe the feeling a writer gets when his words are translated into such exquisite images.”

Asim has a handful of children’s books under his belt, most notably 2012’s Fifty Cents and a Dream: Young Booker T. Washington, an NAACP Image Award Nominee illustrated by Bryan Collier. It’s the story of the celebrated author and educator, born into slavery but who fulfilled his dream to learn to read and write, “setting free the secrets that lived in books.” Asim says he feels like his work as an associate professor and the editor for The Crisis definitely informs his books for children. “It’s all of a piece in some respects,” he explains, “with a desire to communicate at the heart of it. The Crisis used to have a companion magazine for children, called The Brownies’ Book. Although we no longer publish it, I like to think that my books for children are very much in the tradition of that publication. Like The Brownies’ editors (W.E.B. Du Bois and Jessie Redmon Fauset), I welcome readers of every background, while aspiring to fill a need for young readers who are looking for images of themselves in at least some of the literature they encounter.”

Asim—who lately has been re-reading the children’s books of Lucille Clifton, as well as a childhood favorite, Phyllis Krasilovsky’s The Very Little Boy (“Both Krasilovsky and Clifton possessed some kind of intangible, magic quality that I’m still striving to emulate,” he adds)—will see the publication this year of a poetry collection. He’s also completed a play he hopes will find a home. “As for children’s books,” he says, “I have a couple more in the works, but I don’t like to say much about them until they have a pub date. I’ve got no problem with preaching to chickens, but I’m hesitant to count them before they hatch.”

PREACHING TO THE CHICKENS: THE STORY OF YOUNG JOHN LEWIS. Copyright © 2016 by Jabari Asim. Illustrations © 2016 by E. B. Lewis. Illustration reproduced by permission of the publisher, Nancy Paulsen Books, New York.