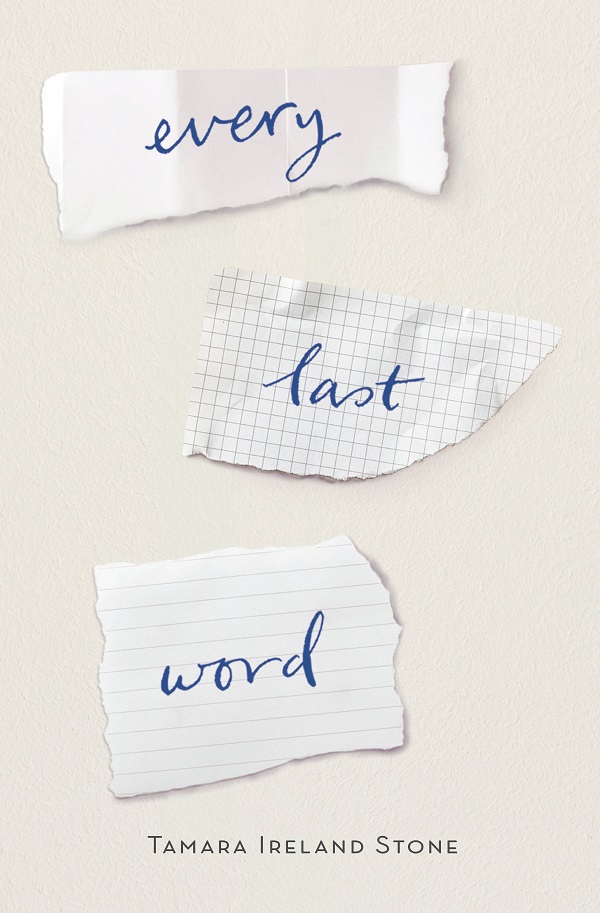 BOOK REPORT for Every Last Word by Tamara Ireland Stone

Is it just me, or has there been a surge of book covers with notes lately? (See: Exhibits A, B, and C.) At least it's not an embarrassing trend—I see you, Kissyface—and it actually works really well for this story, even if it's on the snoozy side.

You wouldn't know it by looking at her, but Samantha McAllister is harboring a big secret beneath her pretty and popular facade: Sam has Purely-Obsessional OCD. Not the kind that makes her wash her hands a zillion times or flick light switches repeatedly, though. Pure-O takes place in the mind, filling Sam's head with dark thoughts and debilitating fears about every move she makes.

It's a condition that none of Sam's friends—the ones who claim to have her back, but would just as easily stab her in it—even know about. So Sam definitely keeps it on the DL when she stumbles upon Poet's Corner, a hidden safe haven for the misfits at school to finally have their voices heard. And Sam has plenty to unload, FOR SURE.

Obvs, I feel terrible that Sam's perpetually questioning every single thought. I mean, overanalyzing is a refined art for teenagers as it is, but it seems especially brutal to be rendered so powerless by your own thoughts. And her inability to truly be herself around the popular crew is relatable to anyone who's ever felt compelled to hide a facet of their real selves.

But Sam's friendships are all in shambles. She has her summer swim club friend whom she only knows in the pool; her lifelong friends whom she stresses over routinely these days; and her Poet's Corner pals whom she keeps secret. I like compartmentalization as much as anybody, but it gets messy when it comes to friendship politics—and I'm just too old for that shizz. Although I'd gladly befriend Sam once everything else on the friendship front is in better shape.

I'll be honest, y'all—there's an early scene involving a dude that nearly made me Fred Savage the book, i.e., NOPE, NOT HAPPENING. (It's nothing trigger warning worthy, but just a personal YA deal breaker.) I'm glad I stuck through that first hiccup, because everything made more sense in context.

Plus, the swoon bounces back in a big way with HOTNESS in the form of AJ, the sensitive, guitar-playing heartthrob of Poet's Corner. Sam and AJ have some not-so-great history to overcome, but they're also revealing bits of their souls to each other during Poet's Corner, which provides ample fuel for sparkage.

Because of Pure-O, Sam's in her own mind a lot, and most of those thoughts really don't make it a great place to be. Insecurity in YA is nothing new, but it's impossible not to feel for Sam when she worries hers is a byproduct of insanity.

"You're not overreacting," she says.

"Are you sure? Because you can tell me if I am. I have a tendency to overthink things, especially when it comes to my friends, and I don't know... I take things too personally. I mean, it isn't always them. Sometimes it's me. I just don't always know when it's them and when it's me, you know?"

Along with careful details of life with OCD, Tamara Ireland Stone has concocted a clever story around her main character. Even though my suspicions were later confirmed, I had been doubting my instincts, unsure whether or not my thoughts could be trusted. (Sound familiar?) Just like MTV's Diary, you think you know, but you have no idea.

Not only is Poet's Corner hidden beneath the school theater, but Fight Club rules are in effect: you do not talk about Poet's Corner. Well, at least you don't go blabbing about it, anyway; that would kind of undermine its entire existence. But how much would I have LOVED to belong to a clandestine club back in high school?! (Who am I kidding: I want to be in one nowwwww.)

Given that the secret club is called Poet's Corner, a little bit of poetry is clearly inevitable. But look—few things make me Fred Savage faster than poems, and yet I didn't hate them here?! In fact, I might have even liked some of them (quelle horror!), esp. those by Sydney, who exclusively writes about fast food and on fast food wrappers.

Sam might keeping her Pure-O diagnosis from her peers, but she has a great support system from the adults in her life. Attentive without being smothering, Sam's mom is always there for her to lean on, and she's also her biggest cheerleader poolside. Warm and caring, Sam's psychiatrist of five years, Sue, goes above and beyond for her client's well-being. Some truly exemplary adulting here.

I know, I know; she doesn't need help getting cast in more YA adaptations. (Not that my fantasy casting is really help, but you know what I mean.) But she has a believable athletic build for a swimmer, and Y'ALL KNOW she has the chops to pull off Sam's secret life of an American teenager.

There's more to AJ than just being a singer with dimples, but that's how I found Tony and I'm already swooning.*

*Despite feeling SUPER OLD that his singing partner is a grown-up Waaaaaaaalt.

This book's premise immediately piqued my interest, but it wasn't until a friend suggested that we might be a good match that I agreed to a date with it. Despite some early hesitation (I mean—POETRY, y'all), we totally managed to hit it off. I'm so glad I set aside my preconceptions to better get to know this book, and to learn more about an unfamiliar-to-me realm of mental health.

Every Last Word is available now.