Much Ado About You 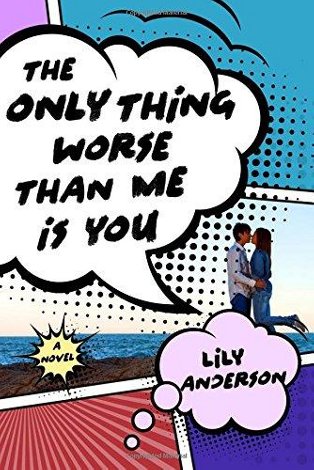 Seventeen years of life had prepared me for a lot of things. I was a fine cricket player and I could sew a dress in two hours and I could strip down any literary text until it was just metaphor and authorial intention. But I was utterly lost when it came to this newfound issue of boys. Or boy, I guess.

—The Only Thing Worse Than Me Is You, by Lily Anderson

A little while back, I wrote about what books I might pick up during my next bout of insomnia.

But, as so often happens, when insomnia actually hit, I picked up something entirely different. And it was exactly the right book to pick up. Not only did it get me through the wee hours, but it even allowed me to NOT THINK ABOUT THE ELECTION for a blessed three straight hours. I might not have gotten much sleep last night, but that peace of mind made me feel almost as well-rested as if I had. Thank you, Lily Anderson, for The Only Thing Worse Than Me Is You: it made a long, dark night feel not quite so long, not quite so dark.

The Only Thing Worse Than Me Is You is a contemporary retelling of William Shakespeare’s Much Ado About Nothing set in a private school for geniuses. It’s narrated by Beatrice “Trixie” Watson, and it begins:

All it took was those ten words. I read them, and I knew that this book was going to be a great fit for me. Trixie is wonderfully prickly. Well, prickly is an understatement—her prickles have prickles, possibly even poisonous tips. When she is hurt or angry, her first instinct is to lash out, and to lash out viciously—often going too far. And when one of her friends is hurting, WATCH OUT, because that’s when she starts quoting Machiavelli. She’s not always right, and she’s not always kind, and she’s not always likable—but she’s always real.

Trixie and Ben have been sparring since elementary school and the infamous Monkey Bars Incident. Now they’re seniors, duking it out for third place in the rankings—their respective best friends are first and second—and, as Trixie puts it:

A decade of battles with Ben West would be worth it if I won the war.

Part of the joy of reading romance is in knowing from the very beginning where the story will eventually end up—it’s not about what the endpoint will be, it’s about how the characters are going to get there. Trixie and Ben coming together is inevitable, so their clear awareness of one another always feels charged, maybe even more so for the reader than for themselves. It’s telling that Trixie’s first line in the book is about him, and it’s telling they’re more interested in beating each other’s rank than they are in the rank itself:

“Well, I can’t beat Harper or her future husband without giving up sleeping and eating and comics. So yeah, I’ll settle for being number three. I’ll get a cake shaped like a four and shove it in Ben West’s stupid hairy face after he walks across the stage at graduation. And then I’ll rip off my cap and gown, revealing a red leather jacket and skinny jeans and moonwalk all the way home.”

“Wow,” Harper said after a moment of silence. “That was detailed.”

The cast is full of ultra-bright teenagers—if they all weren’t so busy with school and extracurriculars, I suspect that they’d all be huge into various fandoms on Tumblr—who spar in a way that’s so full of literary and historical and pop-cultural references that it reads almost stylized, semi-over-the-top. But it’s the kind of over-the-top that makes sense within the context of the book, both because of the Shakespearean inspiration and because of the many, many references to Trixie and Ben’s mutual love of the works of Joss Whedon.

And it’s a warm, pure-enjoyment read for other reasons, too: The scenes that show Trixie’s home life are warm and affectionate, and it’s lovely to see a fictional teen sharing interests and time with her parents. Anderson axes the grody slut-shaming virginity storyline from the original play in favor of a cheating-via-hacking mystery—the lack of faith that Cornell has in Harper is just as much as a gutpunch, but the subsequent revelation-forgiveness-reunion scene is far more believable in a modern setting. (And again, not remotely grody. Relatedly, Anderson also deserves points for improving on Shakespeare’s Don John character.)

Trixie’s internal monologue includes the occasional less-than-inclusive language, and she tends to look down on stereotypically girly things, which feels right for the voice but will make for uncomfortable moments for some readers. But when words or ideas like that come up in conversation, characters call each other on them, from Harper simply muttering “gender normative and antifeminist” in response to something Trixie says—a verbal eyeroll, if you will—to a more involved, but still friendly, back-and-forth between Cornell and Ben:

West grinned at her. His smile seemed broader without the mustache to impede its progress. “Don’t flirt with me in front of your boyfriend. He might go Othello on us.”

And that’s a big part of what made me love this group of characters so much—it’s a super-cute romance, but it’s also, very much, a book about friendship. It’s about loyalty, trust, and faith, and it’s about knowing people—not just on a surface level, but really knowing them, being capable of not only understanding their actions and reactions, but being able to predict them. And best of all, it’s about how friendships can change us for the better, and how we learn from one another.

So adorable, and I can’t wait for Anderson’s next book, which is a companion to this one AND is inspired by Oscar Wilde’s The Importance of Being Earnest. Swoon!