Must Be The Season Of The Witch 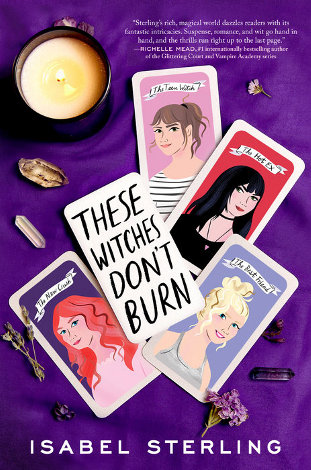 BOOK REPORT for These Witches Don’t Burn by Isabel Sterling

Not gonna lie, this cover was 100% the reason I jumped at the chance to review this book. I loved the main characters illustrated on tarot cards so much! Unfortunately, there was little tarot-reading in the actual book, but it still had me wishing for a tarot deck illustrated with fictional teen witches on the cards.

Hannah is your run-of-the-mill seventeen-year-old girl, living in Salem, Massachusetts and working at a touristy magic shop while dealing with a vindictive ex-girlfriend who also happens to be in her coven of Elemental Witches. Okay, so Hannah isn’t even remotely your run-of-the-mill seventeen-year-old girl. She was born and raised into that witchy lifestyle, and she has to keep it a secret from every non-witch in her life for risk of having her grandmother, the Supreme Lady Ariana, take away her magic for good.

But when a typical high school party is interrupted by a bloody animal sacrifice, Hannah starts to fear that a Blood Witch has come to Salem. Elemental Witches can control air, fire, earth and water, but Blood Witches are a terrifying, different sort of witch. And as dark magic starts to appear around town and Hannah finds herself thrown into dangerous situations, she realizes that she might be the Blood Witch’s target. She must hunt down and find the person who is causing all this chaos, before that person hurts Hannah or the people she loves.

Hannah seemed cool enough, I guess? To be honest, I felt like I didn’t get to know her as well as I would’ve liked, being so busy with deathly Blood Witches and whatnot. She was a good friend and daughter, a faithful member of her coven, and self-assured in her queerness, which were all BFF Charm-worthy traits. I would’ve liked a bit more time to see Hannah in her normal life to understand more about her, though, which I’ll talk more about below.

Hannah’s ex-girlfriend Veronica is a member of her coven, and one of the only people outside of Hannah’s immediate family who knows her secret, so there’s sort of no escaping her. Which turns out to be SUPER unfortunate both for Hannah and for the reader, because Veronica is the worst. She’s toxic, she’s manipulative, she’s vindictive and borderline abusive, and honestly, I wasn’t sure if we were supposed to like her or not! I understand that sometimes exes are still in our lives and, you know, if they’re a member of your coven, it’s hard to quit them for good, but there were times when I wondered if Veronica would end up being the love interest!

There’s also Morgan, the new girl in town who catches Hannah’s eye. There was potential for a lot of swoon here, but I felt like it was squandered. They went from being introduced to kissing to dating with little to no tension or build up, and I never really felt the emotion between them.

Sterling throws the reader headfirst into the story, which reads like a contemporary with a few moments of magic mixed in. There were times when I had to check to make sure that I wasn’t reading a sequel, because I felt like the story moved at a breakneck pace. Every few pages some Big Action-y Thing happened—attacks, sacrifices, fights—that made the book feel like an Avengers movie. I really would’ve liked a bit more characterization and backstory, because without it, the book felt like a lot of ‘what’ with very little ‘why.’ I didn’t know Hannah or Veronica well enough to understand why Hannah would’ve dated someone so terrible, or if Veronica actually had a side I didn’t get to see. I didn’t get enough time with Morgan to understand why Hannah liked her so much, or see enough of the coven to understand how important Hannah’s witchcraft was to her. The plot itself didn’t feel like anything revolutionary, and I never thought the writing was stand-out enough to make up for that.

Listen, I am always down for a witch story, and I really liked that Sterling is giving the reader representation without making this an issue book. Bonus points for being set in Salem! I would’ve liked even more detail about Hannah’s witchiness and queerness.

Relationship Status: I Think I’m In The Wrong Coven

As much as I love a witchy book, I just couldn’t connect with this one. Maybe I’m a Blood Witch instead of an Elemental, because I really wanted to dig in and get to know these characters and all the details of their witchcraft and life in Salem. Instead, I just wasn’t feeling the magic.