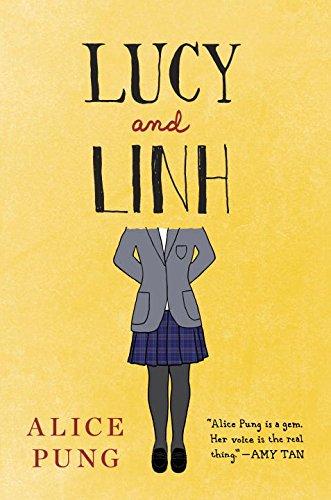 So this was what Katie saw in them—they could be so helpful, and accommodating, and accepting. They even made sure I sat at the front with them during assembly, even though I wasn’t a prefect. Of course we would never be equals, but the more I hung around them, the more I realized how much I didn’t mind. They were like three big albino rats in a cage full of brown mice. You wanted to be close to the glorious creatures, not only because they were so compelling, but also because you hoped that if they smelled your familiar scent often enough, they would not eat you.

—Lucy and Linh, by Alice Pung

Fifteen-year-old Lucy Lam surprises everyone—her friends, family, classmates, community, and especially herself—when she becomes the inaugural recipient of the Equal Access scholarship to Laurinda Ladies’ College. At Laurinda, she’ll receive the kind of education, travel in the kind of circles, have access to the kind of opportunities that would have been out of reach at her old school. But it doesn’t take long for Lucy to realize that the education she’s receiving at Laurinda is less about academics, and more about social structure, power dynamics, and the politics of teenage girls.

Over the course of Year Ten, through a series of letters to Linh, a girl she left behind at her old school, Lucy works to reconcile two entirely different lives. At Laurinda, she’s one of the few students of color; she’s an extremely high-profile scholarship student; and she’s a girl without money surrounded by girls who have only ever known excess. At home, she’s a girl who helps her mother complete illegal sewing jobs in the garage; she’s a girl who deals with utility companies because her English is stronger than either of her parents’; she’s a girl surrounded by people who are constantly working, working, working—not just to survive, but to eventually improve their lives and the lives of their children.

She looked like one of those imitation Franklin Mint porcelain dolls, with the features painted a couple of millimeters above the grooves—the ones that would turn on you when you went to sleep at night.

It’s a book about generational and cultural differences, and about understanding parents as individual people. It’s about realizing that adulthood doesn’t automatically bring about knowledge, understanding, or empathy. It’s about how parents pass their values and worldview on to their children, and it’s about their children beginning to question, consider, and, in some cases, reshape those values and that worldview. It’s about real life as compared to American sitcoms, and it’s about different forms of manipulation, cruelty, and kindness. It’s about understanding what it is to work, and what it takes to create something from scratch. It’s about the complexity of having affection for a person despite their constant microaggressions, and it’s about not feeling able to say anything about that hurt.

It’s about going from a school diverse in all ways except economics, to a school diverse in no ways at all, and it’s about the kinds of things one learns from each experience. It’s about a school administration that is entirely out of touch and more about getting Diversity Cred than it is about actually supporting its marginalized students. It’s about a school with a million high-end facilities, but filled with students who aren’t allowed to use the facilities unless they’re Serious Scholars of the subject—a school that doesn’t look kindly on hobbies or experimentation, that only encourages activities that will ultimately support and boost the reputation of the school:

There weren’t many places to go at lunchtime. So that the grass would stay perfectly green, we weren’t allowed on the lawn at the front of the school. … There were two tennis courts, but those were usually locked during lunch and recess, as were the seven music rooms. You weren’t allowed to go in there to jam with the guitars, because that kind of thing was reserved for the talented.

It’s about walking a constant tightrope, about endless maneuvering for status, and Pung shows it play out for the adults as well as the students:

Ms. Vanderwerp had been the careless one, and Chelsea was making her pay. That was when I learned a very important lesson: here at Laurinda, mistakes meant annihilation.

And it’s about how Lucy’s tightrope walking is compounded by her status as a scholarship student, as an immigrant, as a Chinese Australian, as the New Girl.

It’s about female social dynamics, about different kinds of pressure, about being an outsider. About dealing with overt aggression and about dealing with aggression that comes from a sweet voice coming out of a smiling face. It’s about mother-daughter relationships and about female relationships in general. It’s about pride and shame, how it’s possible to feel both ways about the same thing. And it’s about discovering that it’s possible to reconcile and embrace very different parts of yourself, understanding that people are walking oxymorons, and that that’s okay. But, at the same time, it’s also about hypocrisy:

I was learning a new language here, the language of Laurinda’s snarky and disgruntled majority. A language that was peppered with sexual innuendo, because proper Laurinda girls simply did not do sex. It was too visceral. No one except Gina acknowledged that we might have crushes or want boyfriends just as badly as the girls from Christ Our Savior. No one faced up to the reality that maybe some girls were already having sex, and a lot of it. We were meant to be above all that.

It’s an emotionally exhausting book—in a lot of ways, it reads like a quieter, more character-driven version of The Hunger Games set in an all-girls’ school—and it’s an outstanding read, one that you should just go ahead and order right now. As I did with The Smaller Evil, I question Lucy and Linh’s categorization as a YA book—like the Kuehn book, it stars a teenage protagonist, but with a much older perspective. It reads like Lucy is telling the story of her Laurinda experience after years of reflection, and that memoir-ish feel says Adult more than YA to me—but regardless of what category it falls into, it’ll be a hugely entertaining, engrossing, thoughtful, and worthwhile read for both audiences.