New YA to Check Out in August 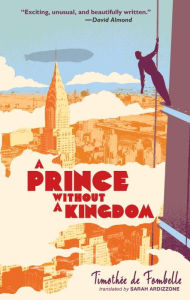 It’s almost August, and therefore—in Maine, anyway—it’s exactly the right time to hide inside in front of a fan with a book. Here’s what’s on deck for this month:

The Dead Girls of Hysteria Hall, by Katie Alender

A History of Glitter and Blood, by Hannah Moskowitz

I’ve already covered both of these: Alender’s is a ghost story set in an abandoned mental asylum, while Moskowitz’s is a dark fantasy about war, love, prostitution, and writing. They’re both smart, both thoughtful, both excellent, but in ENTIRELY different ways—Hysteria Hall is funny, scary, and easy-going; Glitter and Blood is inventive, twisty, and takes work. Loved them, loved them, loved them.

Lair of Dreams, by Libba Bray

A Prince Without a Kingdom, by Timothee de F

Two sequels to two starred books that I’ve been meaning to read for well over a year: The Diviners, and Vango: Between Sky and Earth. The Diviners is a fantastical murder mystery set during the 1920s; Vango is a swashbuckler set during WWII and translated from the French. Why on earth haven’t I read them yet, when they are both so clearly RIGHT UP MY ALLEY? It’s not like they haven’t been on my radar. Sigh.

Diary of a Haunting, by M. Verano

The Creeping, by Alexandra Sirowy

Two more horror stories: the first, a literary entry into the pseudo-documentary genre (think Blair Witch and Paranormal Activity), and the second, a murder mystery in which the villain might be a legendary monster. Kirkus had reservations about the pacing in both books, but as I tend to love scary stories with a slow build, I’m hoping they’ll both be PERFECT fits for me.

Court of Fives, by Kate Elliott

First in a new fantasy series about political machinations and intrigue in a caste-based society. Kirkus praised the worldbuilding, which is always a draw for me, but it should also be a meaty read in terms of looking at identity—the main character is the daughter of people from two different castes.

A white boy falls for a black girl, and then his cop fathe

Horror anthology, with offerings from Kendare Blake and Nova Ren Suma and Megan Shepherd and more! Like most short story collections, this one looks like it’ll be a mixed bag, but everything I’ve read about it promises lots of scares and lots of gore and lots of fun.

The Accident Season, by Moïra Fowley-Doyle

Irish import and debut. Every fall, Cara’s family is plagued by injuries and accidents and deaths…and this Halloween, all of the secrets—and truths—begin to come to light. Kirkus LOVED this one, not only starring it, but saying that it’s written in “prosaic, ordinary language that nonetheless sings”. It sounds beautiful and scary and I CAN’T WAIT TO READ IT.

Australian import, a companion novel to my

much-beloved Wildlife. I have no doubt that it’ll be a lovely palate-cleanser between ALL THE HORROR I’m apparently going to read in August.

These are only the ones that have ESPECIALLY caught my eye—there are loads more coming out—is there anything I’ve missed that I should be watching for?