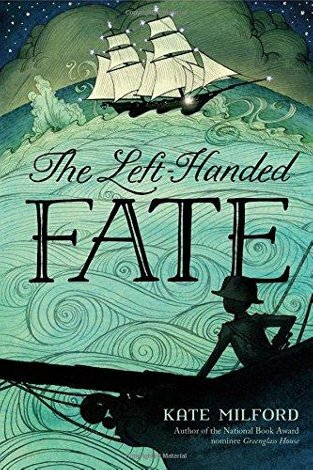 Every October, in addition to rewatching Twin Peaks and watching as many horror movies as I can cram into thirty-one days, I read a lot of horror, dark fantasy, and Gothic fiction. I do it because I love it, and I do it because it feels right for the season.

I also do it to celebrate Ray Bradbury—and more specifically, I do it to celebrate Ray Bradbury’s The October Country, which has been my favorite collection of short stories for going on three decades. Some of the stories are dark, some are sad, most are unsettling in one way or another; some of them show people at their worst, others show them at their best, and all of them are written with empathy, an understanding of people, and a love for humanity.

This has been a hard year in the book world and everywhere else, so I’ve toned down the dark factor in the books I’ve added to this year’s pile—instead, I’m looking for warm, ultimately hopeful fantasy stories. Here are a few of them:

The Left-Handed Fate, by Kate Milford

This is a companion novel to Milford’s stellar Greenglass House, a mystery and a ghost story that’s warm and smart, a celebration of friendship and loyalty and intellectual curiosity and role-playing games. The Left-Handed Fate is set two centuries before Greenglass House, during the war of 1812, and promises to be chock-full of a similar combination of mystery and adventure and magic. As long as Milford wants to keep revisiting the town of Nagspeake, I’ll follow her there, whatever the era.

Five Children and It, by E. Nesbit

Five Children on the Western Front, by Kate Saunders

If you’re looking for charming British fantasy, E. Nesbit is a tough one to beat—which, considering the fact that she died in 1924, says a lot for her staying power. I haven’t read Five Children and It in a million zillion years, but now that a sequel has been released, it feels like the perfect time. In Five Children on the Western Front, we see the return of the Psammead—a wish-granting Sand-fairy—as Cyril, Anthea, Robert, Jane, the Lamb, and new-youngest sibling Edie navigate World War I. While Kirkus wasn’t hugely impressed with it, others were—it won the 2014 Costa Children’s Award as well as being shortlisted for the 2015 Carnegie Medal.

This series is about a three-thousand-year-old dragon, Miss Drake, her pet human, Winnie, and various magical adventures and scrapes they get into in and around their San Francisco home. Miss Drake narrates, the books are formatted like pet owner’s manuals, and they sound so entirely delightful that I’m sad I don’t have them in hand at this very minute.

The first book is set at Miss Mallory’s Home for Lost Girls in Poughkeepsie, N.Y., where all of the girls are either Fair or Talented; the second book is set at Camp Atropos for Singular Talents, where all of the campers have magical talents, from frog-identification to telekinesis. I admit it—I want to read them NOT because of the glowing reviews, but because I find the names of the orphanage and the camp entirely irresistible.

Speaking of irresistible, how’s that for a title? An abused boy runs away from home… and promptly gets captured by the titular evil wizard. Kirkus promises plenty of laughs and cleverness, but says that this book’s greatest strength is in its character development and heart—I am here for it, grabby hands outstretched.

As usual, recommendations are welcome—this list ended up quite heavy on the middle grade, but I’m always open to other age brackets as well. I’m especially looking for warm fantasy with strong threads about family and friendship. And if you’ve got something along those lines with Gothic elements, well: LET ME KNOW.