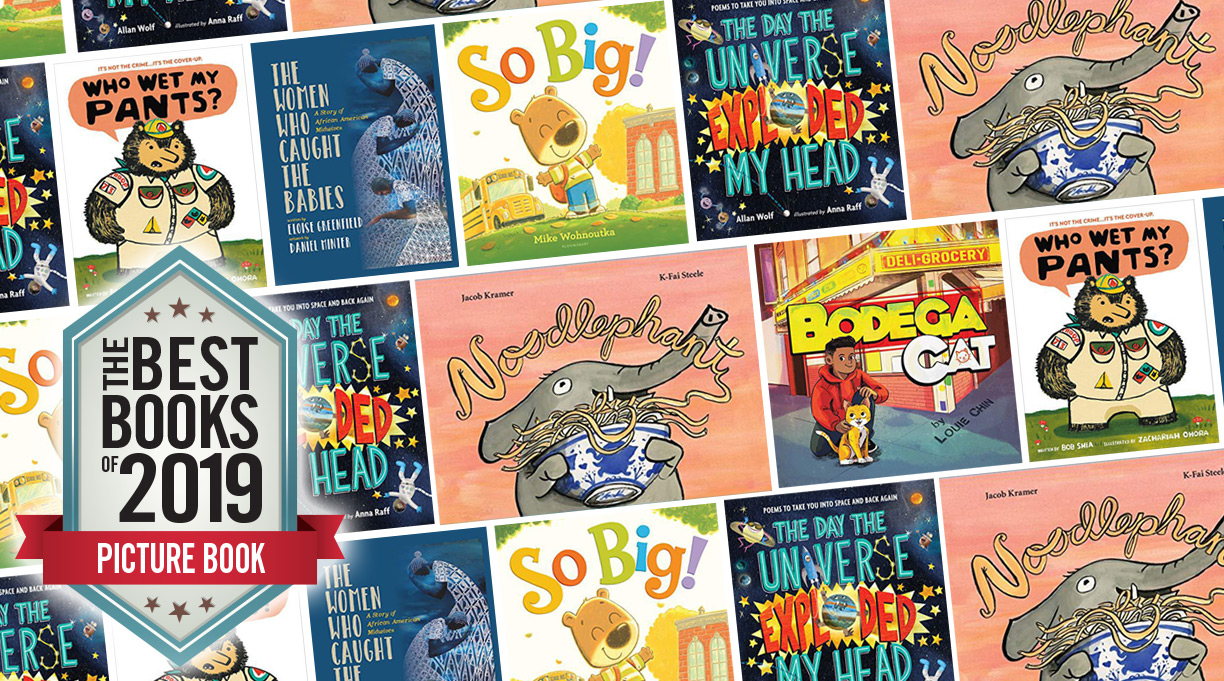 Every year the ritual is the same. I sit surrounded by precarious stacks of picture books, going through starred titles to select the best of the year. It is at one and the same time exquisitely pleasurable (picture books!) and excruciating, because even if 75 sounds like a lot, it isn’t, not when you consider the some 2,000 eligible titles we’ve reviewed this year. Even when you narrow that pool down to the 263 titles we’ve starred, that’s still a lot of fabulous books I can’t include.

Picture books and their cousins, board books and early readers, are the first books children encounter on their paths to literacy. For far too many children, picture books may be the closest they’ll come to fine art. Picture books need to delight both the children they are for and the grown-ups who are reading them…over and over and over and over. They need to build from the get-go a strong relationship between child and book, firmly establishing for the child the truth that reading is one of life’s keenest pleasures. They need to maintain a delicate balance between picture and text, the one ever playing off the other in a delicate narrative dance so the story unfolds seamlessly, as a unitary whole. And they do all of this while carefully, consciously inculcating in little listeners the awareness that different sounds make different words, and that different words have different meanings, and that those little collections of letters on the page make those different words, and that when you put all those words together you have a story.

A picture book, in other words, is magic.

And, wow, do the Best Picture Books of 2019 ever deliver it.

They range in linguistic complexity from Mike Wohnoutka’s six-word So Big!  (Bloomsbury, July 2), which masterfully applies its minimalist, monosyllabic text to evoke all the big feelings and events that make up a little bear’s first day at school, to Allan Wolf’s poetic exploration of astronomy in The Day the Universe Exploded My Head (Candlewick, March 5), illustrated by Anna Raff, a text that confidently mixes scientific concepts and vocabulary with SAT–worthy words. In a concrete poem, a “Black Hole” tells readers that “nearly instantaneously, this density became, in me, an ever- / growing gravity, insatiable and greedy, with a never-ending/ need to draw entire galaxies, through a huge and ruthless/ black galactic straw.”

The artistic styles on display dazzle. Illustrating Eloise Greenfield’s The Women Who Caught the Babies  (Alazar, Sept. 1), Daniel Minter applies pattern and form to depict the African American midwives celebrated, broad background strokes of the brush evoking the waters of the Middle Passage while fluid lines link the women across generations. Louie Chin lightly inflects his cartoon style with a graffiti aesthetic to help Chip the Bodega Cat (POW!, Sept. 24,) tell its story of life in a bustling bodega; it’s the perfect combination of friendliness and urban grit for the subject. Isabelle Simler’s close-up illustrations of sleeping animals in Sweet Dreamers (Eerdmans, March 26) are appropriately dominated by somnolent greens, blues, grays—and touched with Day-Glo orange, which should totally not work but, amazingly, does. And in Birdsong  (Greystone Kids, Sept. 24), Julie Flett applies her characteristically spare style to her story of intergenerational friendship between a young Cree girl and an older, brown-skinned artist neighbor; by paring what she depicts down to the barest necessities, she lets the emotions in the book range freely across the page.

And then there are the stories. Bob Shea and Zachariah OHora combine hilarity with compassion in Who Wet My Pants? (Little, Brown, Sept. 17); Jakob Kramer and K-Fai Steele combine pasta and revolution in Noodlephant (Enchanted Lion, Jan. 29); Uk-Bae Lee combines seasons, a family story, and geopolitics in When Spring Comes to the DMZ (Plough, March 1).