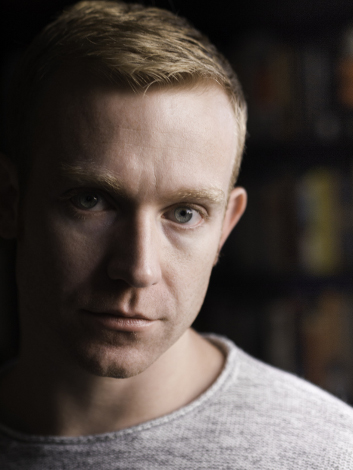 What do you get when you mix gritty adolescence, death, and sexual disorientation? At the very minimum, you’ll get a rudimentary iteration of Colin, the protagonist in Patrick Nathan’s debut novel, Some Hell. When Colin’s father commits suicide, Colin and his family are thrown into complete and utter chaos. With a supposedly psychic sister, a disabled brother, a wildly inappropriate best friend he has a crush on, and a dangerously irresponsible mother, Colin is left to his own devices to carve out meaning in his little patch of world. But it doesn’t all work out in his favor and he is sometimes left to discover the hardships of life in the toughest way possible, oftentimes cheating death…and barely making it out alive.

“All the characters are from different stories. I brought them together into one thing,” explains Nathan, referring to the novel. In fact, each character in this novel lead different lives prior to being crammed inside Some Hell. As Sartre wrote in No Exit, “Hell is other people.” Let us recall No Exit’s plot which takes three deceased characters and places them in a mysterious room for the rest of eternity. Here, Nathan has done something similar. He’s extracted his characters from previous works—so from their previous lives—anchored them on the page, and let them run both wild and confined within the pages of his story.

To frame his characters with the overwhelming heft of death then seems like the logical progression (not that the characters are necessarily aware of themselves as repurposed characters). But the death frame deployed here is not a conventional one. Readers who are well-versed in LGBTQ fiction will very quickly point out that death is no novelty in gay fiction. In fact, it is so overwhelmingly present that it has become mundane, futile, and ultimately offensive.

But Nathan does something else with death in Some Hell. Very much aware of the stigma that comes with gay male novels, where the trope of AIDS has for so long festered, Nathan asked himself: “Why do gay characters in novels have to suffer? Why do they have to die? I don’t always agree with that. Even though his sexuality is such a central topic to [Colin], sexuality is also a central topic to all teenage boys.” Sexuality, then, merely occupies a natural place in the story. It is not the leading force that pushes the narrative forward; it is not what systematically brings Colin closer and closer to death. It is an object of daily life. That’s Nathan’s point!

“Rather than the novel being about a gay teenage boy and his mother, it’s more so about two incredibly, innately depressed people. This seems to be

their first defining characteristic,” says Nathan. Unfortunately, no one but the reader is able to have this level of clarity. The characters are frustratingly unaware of their fate, though they have a sense some of their story will not end well. It’s precisely this frustration that makes the novel so gripping. We care about the characters because we want to see them succeed. “I don’t think readers often understand how much they find being frustrated delightful,” Nathan says. “There’s delight in not knowing something that is delayed and withheld.” Nathan has successfully managed to cruise his readers, effectively wooing them and trapping them, just as he does with his characters, in Some Hell’s toxic but magnetic world.

Michael Valinsky is a Los Angeles based writer from Paris and New York. His writing has been featured in the Los Angeles Review of Books, Hyperallergic, BOMB, and Out, among others.