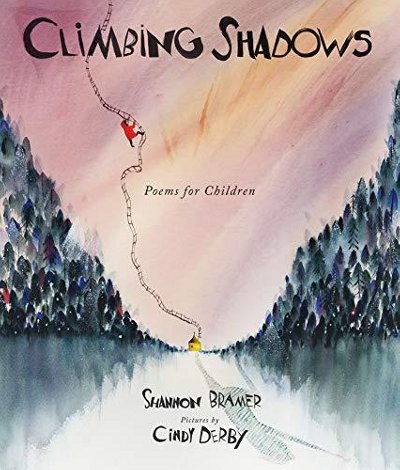 I sometimes see a particular kind of picture book described as a “quiet book.” I think perhaps that phrase has different meanings for different people but that, generally speaking, a quiet book is one that leaves the reader room for contemplation. Perhaps it can also mean a book with inherent ambiguities in part or in full, a book that asks more questions than it provides answers. Artistically speaking, maybe it’s a book with illustrations that are, like its subject matter, not flashy and loud. Shannon Bramer’s Climbing Shadows: Poems for Children, illustrated by Cindy Derby, is so quiet that I want to make sure it doesn’t sneak right by you.

Bramer is a Canadian author who once worked in a public school as a lunchroom supervisor. She explained to the kindergarten students with whom she worked that she was a poet. They were intrigued, and their interest in her writing and in poetry was the birth of this book.

With the support of the classroom teacher, Bramer shared poetry with the students every Friday — from Emily Dickinson to Gwendolyn Brooks. She even read them her own poems, because a poet, she told them, “could be a kindergarten lunchroom supervisor who thinks the word crunchy is as powerful as the word broccoli is beautiful.” In a note at the book’s close, Bramer elaborates:

them think. A poem could be hard to understand and beautiful to listen to at the

same time. They learned that a poem could be about anything ….”

For Valentine’s Day, Bramer offered to write each of them a poem about whatever topic they wanted, and she created an anthology for them to take home. Many of those poems appear in Climbing Shadows.

There are a total of twenty poems here—and with wide-ranging tones. The opening poem about a little yellow house with a poem living inside of it is enigmatic and inviting. There are playful poems about dancing skeletons and cars (named “Crashout” and “Powerdog”) who never sleep. There are more somber poems, including one about a tough day and a child who wants to go home (“I want / to be a puddle”). And there are poems on the contemplative, poignant side of things—one called “Owl Secrets” (“I am an ocean, I whisper to my owl. / I am old inside my body.”) and “The Envelope, “an evocative poem from the point of view of a child (as most of these are) about what her mother means to her: “My mommy is a nest / My mommy is a home.” The subjects range from birthday parties, to mothers, to kindness, to darkness, to polka dots, to octopuses who dream of climbing trees.

The poem of the book’s title is about an active kitten at night and serves as a good example of Bramer’s ability to paint vivid word-pictures: “See her tiny paws, ginger fur / tumbling along / bubbles of light / in the dark house I sleep in?” Several of the poems possess a delicious ambiguity. In “Darkness Looks Like My Mom,” a child’s mother walks into the dark “like a question mark out into the moonlight.”

The illustrations from Cindy Derby (who made one of this year’s funniest picture books) are delicate, impressionistic watercolors with wispy, nuanced lines. She does a fine job of capturing the kinds of landscapes you would see in, say, a cryptic, early-morning dream, and she quite masterfully captures mood and atmosphere. In “Darkness Looks Like My Mom,” the poem itself appears inside a full moon in the inky-black sky. The rest is all shadows with barely-there trees and the outlines of a woman and a cat, walking downhill in the darkness. Derby can go from tender to delightfully peculiar (remember the octopus in the tree?) with ease.

The book’s final poem is addressed to a student named Choying. The author encourages this child to write poetry, because “your words are snowy animals in the woods.” Bramer asks more than once in the poem: “Are you going to write it down?” It’s an invitation of a poem and a fitting one to close out this beguiling collection. Readers will feel encouraged to write down their own words.

“Are you going to write it down?” I’m glad Bramer did.