The Power of the Teller 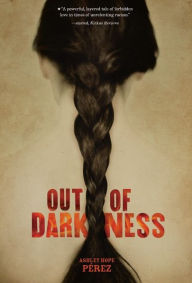 —Out of Darkness, by Ashley Hope Pérez

I’m a crier. I cry easily and often, set off by stories ranging from Mad Max: Fury Road to Ms. Marvel to that Subaru commercial about the guy who took a cross-country road trip with his old dog. (Even just typing out the description of that last one made me tear up.) So I do understand that when I say something made me cry, most people take that information with a grain of salt.

Out of Darkness made me cry so hard that I got the dry heaves, the kind of ugly-crying that I experienced while reading Code Name Verity and The Storyteller. So when I say it made me cry, I mean that it MADE ME CRY. Consider yourself warned.

It opens with a description of the aftermath of the New London School explosion on March 18, 1937—which, according to Wikipedia, still ranks as the deadliest school disaster in this country—with parents and townspeople picking through the rubble, looking for survivors, but mostly finding dead bodies, or parts of dead bodies. Single shoes, pages from school books, pieces of their children.

Then, it rewinds about six months and focuses in on a few characters: Naomi, whose Mexican heritage is evident in her dark skin, resulting in derision and absolutely vile behavior from most of the white residents of New London; her two whipsmart—and much lighter-skinned—younger half-siblings, twins Cari and Beto; Wash, a supersmart, handsome black boy whose father wants him to become a doctor, but who has other dreams; and Henry, Naomi’s stepfather and the twins’ father, a white man who is attempting to replace alcohol and violence with Jesus and the power of prayer. While other characters factor in—and Pérez includes occasional sections from the perspective of “The Gang,” a composite chorus of the young white people of New London—it’s these five who are the focus, and ultimately the actors, in a Greek tragedy that plays out in a Texas oil town.

It’s a story about identity—from larger, overarching identities, like race and culture, to more personal expressions of identity, like not being able to speak your strongest language in public or being forced to change your name. It’s about agency and choice and sacrifice, about regret and unfairness and abuse and violence; about the danger that comes from stepping out of line, but also about the necessity of stepping out of line.

It’s about humanity’s never-ending need for a scapegoat. It’s about love, about connection, about family, about being stuck between impossibilities, about how one unthinking choice in one moment can result in a lifetime of regret. And it’s about the framing of history, about how much power the tellers have—both in terms of what they choose to focus on, and what they choose to leave out.

That last point, about the framing of history, Pérez writes about in her Author’s Note:

In researching this novel, I was struck by the many ways in which whole swaths of lived experience have been largely excluded from historical accounts, in part because certain communities were not deemed worthy of note in newspapers and other sources considered authoritative and reliable. These silences need to be amended; I hope my fiction gives readers an appetite for stories lived in the margins of spotlit scenes.

Read it. Cry. Think about it. Consider the narrative laid out by journalists and historians. Ask questions. Remember that for every story we know, there are thousands more that have been passed over, forgotten. Seek out the in-between stories, the stories that are swept under the rug and into the cracks between the floorboards. Look deeper. Read closer. Listen harder.