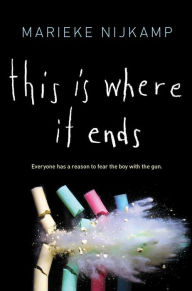 The only things that give us purpose are the stories that tie us together. We all have so many secrets to keep. And I hold mine close.

—This Is Where It Ends, by Marieke Nijkamp

It’s the first day of spring semester in Opportunity, Alabama. Except for a few students—some at an early morning track practice, others up to not-so-school-sanctioned activities—the entirety of the student and faculty body is in the auditorium for the principal’s annual speech. When the speech is over and everyone moves to exit the room, they find the doors locked.

And then one last person enters the room. And he starts shooting.

This Is Where it Ends is told from the perspective of multiple characters, uses a variety of formats, and takes place in real time, over the course of less than an hour. It’s utterly compelling—the rare book that demands a one-sitting reading experience while ALSO ratcheting up the dread with every page turned. It made me so tense that I turned myself into a human pretzel while reading it—I LITERALLY had to untangle myself in order to stand up once I had finished.

Nijkamp makes the shooter’s motivations clear without romanticizing him, diminishing the horror of his actions, or allowing his ultimate fate to make him a martyr. Unlike the news coverage of almost every school shooting there’s been, she doesn’t allow this to become his story—while he is obviously a key player, This Is Where It Ends belongs to the victims and survivors of his rampage. The cast is diverse in so many ways—religion, ethnicity, sexual orientation, disability, temperament, experience, dreams for the future—and Nijkamp integrates the aforementioned various formats seamlessly, using them to propel the story forward while also heightening its emotional impact.

In a story that’s already enormously timely and culturally relevant, she also comments on the behavior of journalists on social media—through a stomach-turning series of tweets, she shows various outlets looking for quotes from the students who are trapped in the auditorium, a revolting practice that we’ve become sadly accustomed to in real life—as well as highlighting the knee-jerk prejudice we’ve seen again and again from authority figures and law enforcement:

“I’m calling from Opportunity High,” Fareed says, after giving our names. “We’ve heard gunshots.” He sounds so calm. The Fareed I know, with his steadily teasing smile, has disappeared. I’ve never met this Fareed. He articulates with care, so that his Afghan accent isn’t as pronounced. Next thing, they’ll mark him as a suspect. It wouldn’t be the first time.

On top of all that, she depicts sexual assault for what it is—an act of exerting power and control, rather than about sex—in a way that, again, provides commentary on the horrors of our world, shows the ripple effect that one act of violence can have on a large group of people, and also serves to enhance our understanding of the characters and their relationships.

It’s a story about power and violence, about despair and fear and the abuse cycle, about secrets and lies and guilt and betrayal; it’s about hope and bravery and tenacity, about family and friendship and love. It’s a story that tells the truth, that avoids platitudes, that promotes empathy, that demands action.