Protect Me From Myself 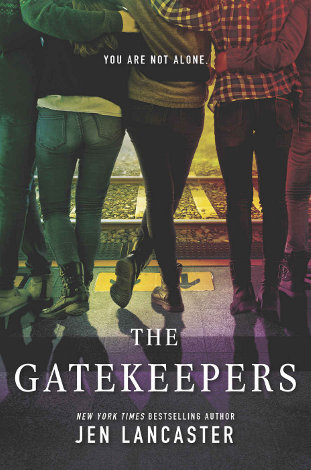 BOOK REPORT for The Gatekeepers by Jen Lancaster

Are Big Butts the new Big Face? I certainly hope not, and anyway, I have a few issues with this cover besides the butts. Namely, the fact that they all appear to be female, while more than half our narrators are male. The train tracks are Significant with a Capital S, but all in all, this cover doesn't do a whole lot for me.

With its insane academic standards, extreme competition, and gold star record of sending students to the Ivy League, North Shore High School breeds excellence. But it also has a dark history of breaking the students who can't keep pace, and teen suicide rates have always been high in this otherwise picturesque town. When two teens take their own lives over summer break, North Shore's students come back for a fall semester where tensions are even higher than normal. And when the suicides don't stop as the school year progresses, North Shore's students decide to take matters into their own hands.

Lancaster gives us five narrators. There's hip-hop loving, overachieving nerd Stephen, whose overbearing mother pressures him even more than he pressures himself. Stephen's best friend Kent is also a hip-hop loving, overachieving nerd with an overbearing mother, albeit with a bit more chill than his BFF. Mallory is North Shore's Barbie—she's got the grades, the athleticism, the looks, and the extracurriculars. If only her mother would notice something other than the amount of calories she consumes. Owen would rather skip class to smoke weed, and his absentee parents wouldn't know the difference. And finally, there's Simone, the new girl whose artist parents moved her to North Shore from the U.K., and who offers the closest thing we get to an outsider's perspective.

My BFF Charms are a mixed bag that range from "Hell No" to "Heck Yes" and everything in between. I particularly loved Kent's ability to be both silly and serious, and found Simone's relationship with her parents and openness to meeting new people refreshing. Mallory grew on me over time, as did Owen, but Stephen was harder to relate to. But despite how I feel about them on the BFF spectrum, all of Lancaster's characters felt authentic and raw. I ached when they ached, I felt their frustration toward their parents, I wanted them to escape this awful town and find happiness.

With so many narrators, there were a lot of opportunities for swoon, and there were definitely some sexy moments, but at the end of the day, the swoon takes a backseat. These kids are traumatized, and yes, sometimes making out with other people helps dull the pain, but it was hard to root for any of them to get together when, first and foremost, you needed them to survive.

Talky Talk: He Said, She Said (and He Said, and She Said)

As previously mentioned, we get a lot of different voices in The Gatekeepers, and Lancaster was a pro at differentiating their tones, so I never felt confused about whose chapter I was reading. Lancaster kept a steady sense of foreboding throughout the story—when we know that teen suicide is an epidemic, the reader is constantly worried about who will be next. And so many of her characters are struggling with such deep-rooted anxieties, it could have been any of them. Despite handling such heavy subject matter, Lancaster never veered into after-school special territory. She has a way of teaching the reader without the reader feeling like they're being preached to.

Okay, wow, guys. These parents are terrible. Or at least, most of them are. Stephen's mother was so overbearing and pushy, I felt my teeth grind every time she was on the page. And Mallory's mom—DEAR GOD. She nicknamed her own daughter "Calorie Mallory" when Mallory was a pre-teen, which, you will not be shocked to learn, has led to Mallory's current unhealthy relationship with food and exercise. And the worst part is that the reason they push their children to be the best, or the skinniest, or the smartest, is not because they want what's best for their kids, but so that they'll have something to brag about to the other moms in their Pilates classes.

Book, I like you. I get what you're about and I applaud what you're doing. I've got your back if you need me, even if I didn't really feel like we made a ~love~ connection. I know the perfect match is out there for you, though. You're definitely going to change someone's life for the better, and I respect that.

The Gatekeepers is available now.