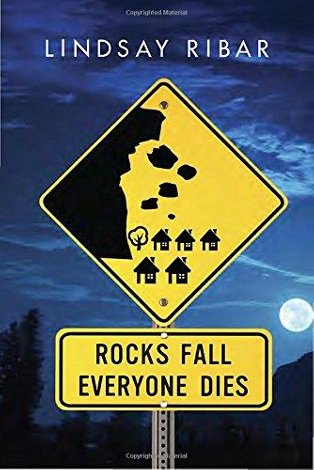 I walked into this book wholly unprepared for what I was going to find. It starts like a YA romance: with a seventeen old boy called Aspen eating out with his best friend Theo and his girlfriend Brandy. Aspen has been secretly in love with Brandy for a while, and he is hopeful that Theo and Brandy will break up soon. He knows they will.

Let me retrace my steps: Aspen is one of the Quicks, a family whose mission in life is to perform magical rituals in order to keep a cliff from destroying an entire town, a mission so important that at least three family members must stay in town at all times to fix any cracks that may appear at any time, or else the entire town is destroyed. They do that by reaching inside people – by touching an object they own – and stealing feelings, emotions, anything that makes them them, to feed to the cliff. The Quicks have only one rule: they can’t reach into each other.

There is Grandmother, who is always there. Aunt Holly, who has been drinking more and more since her daughter Heather died suddenly a few months before (Aspen didn’t cry when Heather died). And now there is Aspen, in town for the summer, replacing Heather in the triad at least for the time being, hanging out with his friends and finally, finally hooking up with Brandy. Interspersed, there are snippets of Aspen’s past, especially his relationship with his father and mother, the latter recently gone after a divorce.

A last minute read for the year, Rocks Fall Everyone Dies took me completely by surprise. Described as Twin Peaks meets Star Hollows, I can’t image a less apt description than that for this book. The reference to Twin Peaks and Star Hollows are references to stories that feature quirky characters in quirky towns. In fact, in both those reference works, the town is as much a central character as the characters themselves. Not so much here: there is very little about Three Peaks or its characters. This is a book completely devoted to Aspen and the Quicks with a couple of excellent secondary female characters in Brandy and towner Leah.

Rocks Fall Everyone Dies is at its core a coming of age story, about deciding what kind of person you want to be. Aspen is a self-centred, arrogant character who doesn’t think twice before using his power to manipulate people. That’s what the Quicks do; after all, they have this incredible power of manipulating, of effectively changing people - even if for the greater good, this is effed up and questionable of course, and the more you read the book, the more a sense that something more sinister is at play here. For example: why hasn’t Aspen cried after his cousin died? Why is he so angry at his mother? How come it is so easy for him to just reach into someone and take what he wants? Is he like that because he was shaped like this or is it because he is an unmitigated asshole? Or could it be both? And to my delight, there was an element of unreliability of narrative here, which just made this book even better.

The story never went where I thought it would: full of unexpected twists and plot developments and with several awesome female characters that call out the main character on his bullshit, Rocks Fall Everyone Dies is a delightful surprise, a great read to finish 2016 on a high note.