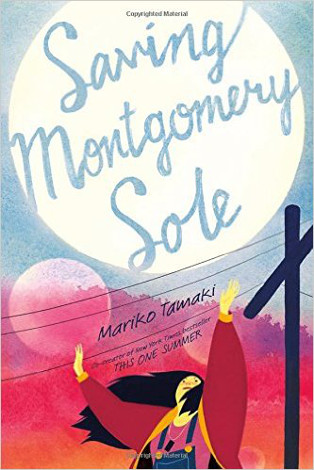 Cover Story: Moon Over My Monty

Cover Story: Moon Over My Monty

Sigh, this cover by Eleanor Davis is DA BOMB DOT COM. The artwork itself is gorgeous, but I especially love how it looks like Monty is trying to command the powers of the universe -- and it being so much beyond her control.

Welcome to Aunty, California -- which isn't particularly welcoming to outcasts like sixteen-year-old Montgomery Sole, who'd rather skip out on a pep rally for a Mystery Club meeting. Together with her besties, Thomas and Naoki, Monty explores weird and unexplained phenomena. And her latest obsession is the Eye of the Know, a mysterious crystal amulet that she bought online. The Eye couldn't possibly help Monty take on bullies at school... could it? But if it could, maybe it'll be handy in dealing with the town's narrow-minded newcomers.

I wish nothing but the best for Monty, but girlfriend still has a lot of growing up to do. A nonconformist to a fault, she can be fairly judgmental towards tastes more mainstream than her own. Monty, it's great that you're so passionate about your interests, but realize that there are people who feel similarly about things you've written off. If that's how they choose to spend their time, then so be it; the world's big enough for everyone to enjoy their many and varied hobbies. Just focus on you doing you.

Aside from a former crush that turned out to be a jerk -- whose jerkfaceness negates any possible swoon -- Monty doesn't have any love interests. Thomas, however, is constantly going on dates with older men. Which brings out the protective big sister in me again, because THOMAS -- you're only 17! How much older are these gentleman callers, anyway?!?

OK, I have no doubt that there are still plenty of intolerant idiots out there, as current events frequently verifies, but the ones in Aunty feel particularly cartoonish -- esp. the vapid popular girls. While there is a measure of 'don't judge a book by its cover' in this story, it's mostly not concerned with developing the antagonists much beyond their stereotypes.

The book is also not that concerned with making pop culture references that are younger than its characters. It makes sense for someone like Thomas, who watches a lot of old films, but all the references that I spotted date back to the '90s or earlier*; they're explained for an actual YA audience, but the explanations are generally preaching to the choir for readers that are a little less Y and a little more A. It's a choice that stood out to me for not really serve either crowd well.

Momma Jo, Mama Kate, Monty, and little sister Tesla might have their ups and downs, but the one constant that binds the family together is love. The Soles' estrangement from Monty's grandparents is unfortunate, but it's also unfortunate to have bigots for grandparents, so.

Type A that she is, Monty uses a productivity app "designed for overachieving businessmen" to keep track of potential Mystery Club topics, as well as things that she has neither interest in nor understanding of.

Naoki and Monty's family are all from the maple syrup paradise, so YAY CANADA! (Full disclosure: as is this reviewer, who is also suddenly referring to herself in the third person. She'll stop now. And not to generalize too much, but pointing out Canadians in pop culture is a pretty Canadian thing to do, so this fulfills my patriotic duty.)

When this book asked me out, there was no way I could say 'no' to that pretty cover or the brains behind its story. But we didn't hit it off like I hoped we would, and, to be honest, I started contemplating my escape early on. I ended up sticking around, and we became better friends than I had thought possible -- but, man, it was a road to get there. So let's not push our luck by doubling down on this friendship, OK? I'll see you around the hallways.