Like the book, HBO's Sharp Objects is dark, dark, dark. 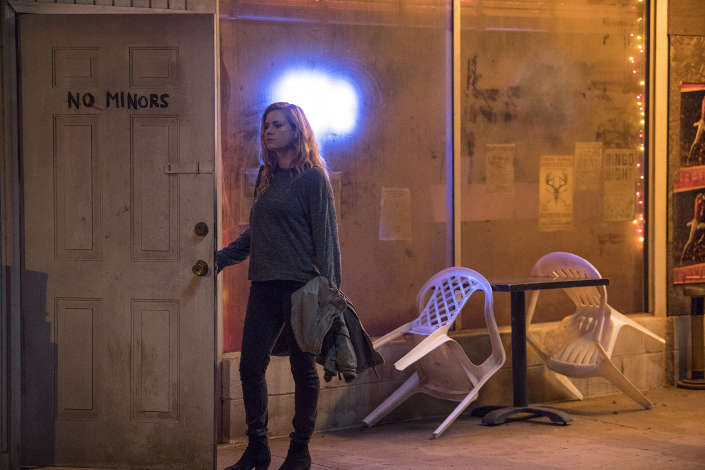 Gillian Flynn, a former writer for Entertainment Weekly, struck gold in 2012 with Gone Girl, a twisty thriller whose success led to an Oscar-nominated 2014 film adaptation and a rash of mysteries with unreliable narrators—not to mention an epidemic of book titles with the word Girl in them. But Flynn began her career as a novelist six years before, with 2006’s Sharp Objects, which our starred review called a “savage debut thriller.” Its HBO miniseries adaptation, starring Amy Adams and Patricia Clarkson, premieres July 8.

In the book, hard-drinking, hard-living Chicago newspaper reporter Camille Preaker reluctantly visits her tiny hometown of Wind Gap, Missouri, on assignment. She’s there to write about the disappearance of 10-year-old Natalie Keene, who, shortly after the journalist arrives in town, turns up dead, with her teeth removed—just like another child was, the year before. Camille searches for answers from wary residents and unwisely has an affair with Kansas City detective Richard Willis. Meanwhile, she struggles with dysfunctional relationships with her mother, Adora—a cold woman who seems to have never gotten over the death of her other daughter, Marian, years ago—and her 13-year-old half-sister, Amma, who harbors deep psychological issues.

As Kirkus’ reviewer pointed out, the author, who is a co-writer and executive producer of the series, withholds one key bit of characterization for quite a while—the fact that Camille used to habitually cut words into her flesh, so that all but her face, hands, and a spot in the middle of the back are covered with scar-text. (In hindsight, this seems like a dry run for Flynn’s reveal halfway through Gone Girl—sorry, no six-year-old spoilers.)

A few conveniently thematic words on Camille’s skin (“Vanish,” “Dirt,” “Fix,” and others) serve as episode titles in the TV adaptation. It’s directed by Big Little Lies’ Jean-Marc Vallée, who delivers numerous long, quiet moments, punctuated by quick, choppily edited flashbacks of Camille’s dire childhood. It’s very faithful to the book, overall—although it does get to those scars more quickly than the book does, impressively revealing them at the end of the first episode. (Seven of eight episodes were provided to reviewers at press time.) However, other alterations, such as the inclusion of an extra-Southern local festival celebrating the sacrifice of a Civil War-era rape victim, and several short conversations that Camille isn’t privy to in the first-person novel, seem like unnecessary padding. At one point, a key bit of investigation is given to Richard instead of Camille, making her seem even less competent.

Still, the miniseries does nail the book’s unrelentingly grim tone. Wind Gap looks like the very picture of soulless suburbia; Adams’ wardrobe, as Camille, sticks mainly to shades of black and gray; and the sweaty, Cool Hand Luke-style summer heat never lets up. At one point in both versions, Richard asks Camille what her favorite color is. She replies “blue” in the book—but “black” in the series. Her favorite season and ice-cream flavor? “Winter” and “coffee,” respectively. Who knew that coffee ice cream was so goth?

One problematic aspect of both the book and miniseries also bears mentioning: their portrayals of most of their female characters as truly horrible human beings. Wind Gap women are all prone to fake politeness and vicious gossip; teenage girls are, if anything, more brutal to one another. Only the considerable acting skills of Adams, and of the excellent Clarkson as Adora, make their characters seem less cartoonish.

In short, readers and viewers looking for escape will find none here. It’s just so very dark—like the all-black album cover in 1984’s This Is Spinal Tap. As one character said in that film: “It’s like, how much more black could this be? And the answer is none. None more black.”