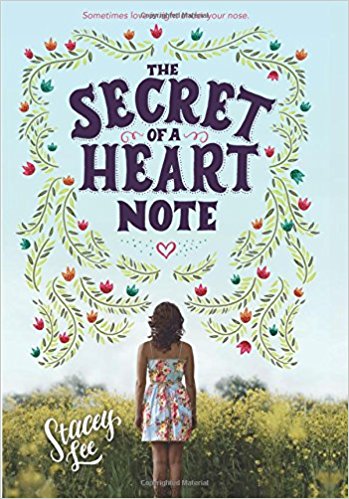 While there’s no explicit rule against romantic relationships, our colonial ancestor jinxed them in her Last Word: “Beware ye aromateur; lay your traps of love, but do not yourself get caught.” Fall in love and, like Aunt Bryony, lose your supersniffer. It’s why Mother chose my father from a list of donors she got in the mail like a Christmas catalogue. And why she named me after the flower mimosa, better known as touch-me-nots because their leaflets fold inward at the heat of a human hand.
Love witches can’t fall in love.
—The Secret of a Heart Note, by Stacey Lee

Aromateurs have been around for as long as people have, but as far as they know, fifteen-year-old Mim and her mother are the last two in the world—women with a sense of smell so powerful, so precise, that they can use it to find things, to avoid danger, and to identify and encourage compatible love matches. While many people see their innate talents and unparalleled skills as dangerous and frightening—Mim’s family history is peppered with martyrdom and tragedy—people in love are often willing to try anything, so business is, as ever, booming. (If you can call it a “business” when you provide a service for free?)

Mim understands the weight of her lineage. She understands the importance of their work, of protecting her nose, of honing her skills. That said, she still longs for “normal” teenagerdom—which is why she is now enrolled at the local public school instead of still being homeschooled by her mother. Now, though—after accidentally dosing the wrong target in an attempt to help her math teacher with his crush on the school librarian AND starting to fall for the school’s soccer star WHO JUST HAPPENS TO BE the son of the woman she accidentally dosed—she’s starting to see why her mother thought it was a bad idea.

I’ve been trying to kick myself out of a serious Reading Slump for months, and it turns out that The Secret of a Heart Note was the cure—this book is a treasure.

It’s warm, it’s empathetic, it’s nuanced and complex, it’s flat-out delightful. It deals with the importance of perspective, of understanding the motivations and psychology behind any given behavior. For example: at first, the main antagonist comes off as a Mean Rich Girl. But as you get to know her, she becomes a human being—a human being whose actions will be unforgivable for many readers, a human being who won’t be dubbed ‘likable’ any time soon, but a human being nonetheless.

It’s a perfect summer read—one that feels comfortable and familiar AND original and surprising. On the comfortable end, at about the halfway mark, careful readers will start to see how Lee is moving her pieces into place for happy endings across the board—and seeing those threads somehow makes the emotional payoff even more effective. There are a million small examples on the surprising end, but one detail I loved is that the love witches aren’t a secret. They’re known to the general public—they’ve been written up in Scientific American, even—which allows the story to play with Science As Magic, and forces Mim to contend with skeptics, fear mongers, and True Believers.

It’s smart, it’s funny, it’s beautifully written and charming, and it’s just as much about family and friendship and independence and power and responsibility and trust as it is about romance. It’s a celebration of coincidence and fate and love, but it’s also a celebration of willingness to listen; of seeing one another as three-dimensional and complex; of working to understand other peoples’ strengths and weaknesses—and our own.

A note on the cover art—as pretty as it is, it doesn’t at all reflect the content of the book:

If I touch individuals predisposed to liking me—most often boys, but sometimes girls—residue from the thousands of elixirs Mother and I create transfers off my skin, like the dust from a moth’s wing, causing attraction. It’s why I always wear hats and long sleeves in public, though I draw the line at gloves, which would just make me look like a germaphobe.

So here’s hoping that gets changed on the paperback edition.