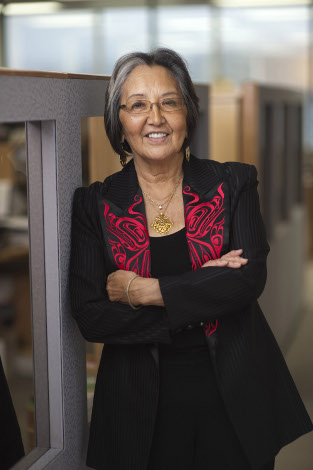 It’s a pleasure to speak today with Dr. Rosita Worl, President of Sealaska Heritage Institute in Juneau. In 2014, as you will read below, the Institute developed Baby Raven Reads, a culturally-based program promoting early literacy and school readiness for Alaska Native children. You will also read below, in Dr. Worl’s own words, why this was groundbreaking. I’ve seen a selection of their 2017 picture books, vividly-illustrated traditional tales by writers and illustrators from the Tlingit, Haida, and Tsimshian cultures of Southeast Alaska. For Alaska Native children in that region, they are stories that reflect their cultures and lives. For me, a white reader in Tennessee, it was a rewarding introduction to cultures I’d not been exposed to in my traditional public school education.

Baby Raven Reads was awarded the 2017 Best Practice Honoree as part of the Library of Congress Literacy Awards Program, and early this year Shanyaak'utlaax: Salmon Boy was awarded the 2018 Best Picture Book from the American Indian Library Association, an affiliate of the American Library Association. Baby Raven Reads is a remarkable model for publishers everywhere, and their books — created to promote Alaska Native literacy, while also educating a wider audience — lift up the voices of Native authors and illustrators.

Can you tell me about the Sealaska Heritage Institute, when it was founded, and its mission?

Dr. Worl: Sealaska Heritage Institute (SHI) is a private nonprofit, founded in 1980 to perpetuate and enhance the Tlingit, Haida, and Tsimshian cultures of Southeast Alaska. Our goal is to promote cultural diversity and cross-cultural understanding through public services and events. We also conduct social, scientific, and public policy research that promote Alaska Native arts, cultures, history, and education state-wide. The institute is governed by a Board of Trustees and guided by a Council of Traditional Scholars, a Native Artist Committee, and a Southeast Regional Language Committee.

Can you talk about the significance of Baby Raven Reads and why your 2017 releases are considered groundbreaking?

Research shows that children who are fluent readers by the end of third grade are likely to do well in school and go on to higher education. So, through Baby Raven Reads, we are trying to do two things: improve kindergarten readiness for Alaska Native children and increase positive attitudes for reading in their homes. We are accomplishing this by engaging families through Native core values and the Native world view. The key is that the program is rooted in place and community and is culturally-relevant and responsive.

Baby Raven Reads has two main components: family literacy events and publication of children’s books. During the family literacy events, Alaska Native families with young children form a community that engages in traditional storytelling, songs, and other cultural and literacy activities with the goal that parents will continue the reading activities at home. In Juneau, family events occur in a cedar clan house, which is the traditional hub where communities used to come together and tell stories. Baby Raven Reads is the only culturally-relevant kindergarten-readiness program in Alaska that includes family events featuring traditional Tlingit, Haida, and Tsimshian stories, songs, and language.

The program also includes a component to develop culturally-relevant children’s books. We’ve already published 19 culturally-based books and we’ll publish another nine books by 2020. We consider the release of the books to be groundbreaking, because there are so few culturally-relevant children’s books from Southeast Alaska that are not tailored for the commercial market. It’s so important for Native students to see themselves accurately reflected in books and other materials. Studies conducted over the past three decades provide evidence that Native language and culturally-responsive programs are associated with improved academic performance, decreased drop-out rates, and improved school attendance.

The series also highlights the idea of Native people telling Native stories—a concept SHI emphasizes through all of its public programming—by showcasing Alaska Native authors and illustrators. According to data released by the Cooperative Children’s Book Center at the University of Wisconsin-Madison, 35 children’s books were published about American Indians in the United States in 2016 (out of a total of 3,200), and only eight were written by Native authors. The CCBC receives most of the trade books published annually in the United States.

Current mainstream books and curriculum are problematic, because they often depict Native cultures negatively or erroneously. As recently as 2014, the Juneau School District came under fire for using books that falsely portrayed Native cultures, and they wound up pulling those materials.

How do you find your authors and illustrators?

Dr. Worl: As I mentioned above, before we began Baby Raven Reads, there were very few children’s books developed for Tlingit, Haida, and Tsimshian children and young adults that were culturally-based. So, when Sealaska Heritage first began the process of developing the Baby Raven books, we had trouble finding Tlingit, Haida, and Tsimshian writers and illustrators who had experience producing books for children and young adults.

For some of the books, SHI hired a Tlingit playwright to adapt traditional stories, and for others, staff adapted old texts. We also used stories written by Pauline Duncan, a Tlingit teacher who developed texts for her students. Pauline adapted some of our creation stories into children’s narratives. We also hired Hannah Lindoff, who collaborated with a Native illustrator on a children’s book a few years ago, to write original texts highlighting Native ways of life, such as subsistence. Our most recent title, How Devil’s Club Came to Be, was written by a young Tlingit author who composed the text while she was still in high school. How Devil’s Club Came to Be was recently lauded as a recommended title by American Indians in Children's Literature.

After putting out a public request for proposals, we hired Native artists who were very talented at Northwest Coast design but who did not have experience illustrating children’s books. And I have to say, their artistic skills translated into imagery that was optimal for the age groups SHI was targeting. More importantly, because they came from the culture, they understood the cultural practices and stories. And so the art came from an authentic place. The supernatural, dreamy elements inherent in their illustrations were remarkable and told the stories in a way that I haven’t seen before. We learned from this experience that we need to cultivate more Native writers and book illustrators, because the stories that resonate with Native students come from Native people. We also believe it will help inspire more Native artists and writers to tell their own stories.

Congratulations on the 2018 American Indian Youth Literature Best Picture Book Award for Shanyaak'utlaax: Salmon Boy. What does it mean to Sealaska to have this AILA recognition?

Dr. Worl: We were so excited and honored to be recognized by the American Indian Library Association. We were thrilled with the final books, yet we didn’t anticipate to be publicly recognized in this way by such an important literacy organization. We believe our program is effective and unique, but it means something to have that confirmed by the AILA. We are so grateful to the association for recognizing Baby Raven with this honor, which we can use in the future while laying the groundwork for more literacy programs and Northwest Coast books for children and young adults.

On that note, can you talk about the Library of Congress Literacy Awards recognition and what that means for Baby Raven Reads?

Dr. Worl: This was the first honor we received for Baby Raven Reads, and wow, what a way to begin. The Library of Congress is the country’s most prestigious literacy organization and its largest library, and we were overwhelmed to receive its 2017 Best Practice Honoree award. This particular distinction means a lot to us, because our programs, including Baby Raven Reads, are developed through research and driven by results. We have a talented team of people who put their all into Baby Raven Reads, and these outstanding books and the effectiveness of the program overall (which was confirmed by a research firm) are the product of that work. We knew we were running a successful program, but it was incredibly humbling to have that validated by the Library of Congress. That honor was one of our brightest moments in 2017.

What's next for Baby Raven Reads?

Dr. Worl: We are happy to report that we received additional funding to expand our program to nine additional communities. We’re offering the program in Juneau, Angoon, Craig, Hoonah, Klawock, Saxman, Sitka, Petersburg, Wrangell, and Yakutat through 2020. Family literacy events are already up and running in most of those communities.

We also have funding to produce an additional nine books for children and young adults over the next three years. The first three books will all be traditional Raven stories adapted from oral narratives, recorded by the award-winning Tlingit scholars Nora and Richard Dauenhauer. The three illustrators for these books are artists we’ve worked with before: Tlingit artist Michaela Goade, Haida artist Janine Gibbons, and Tsimshian artist David Lang. Each of them has a distinct style, and it’s been really exciting to see how they interpret these texts through imagery. We can’t wait to see them in print.

SHANYAAK'UTLAAX: SALMON BOY. Copyright © 2004, 2017 Sealaska Heritage Institute on behalf of clans that own the oral tradition and the Northwest Coast tribes who tell this story. Illustration reproduced by permission of the publisher, Sealaska Heritage.