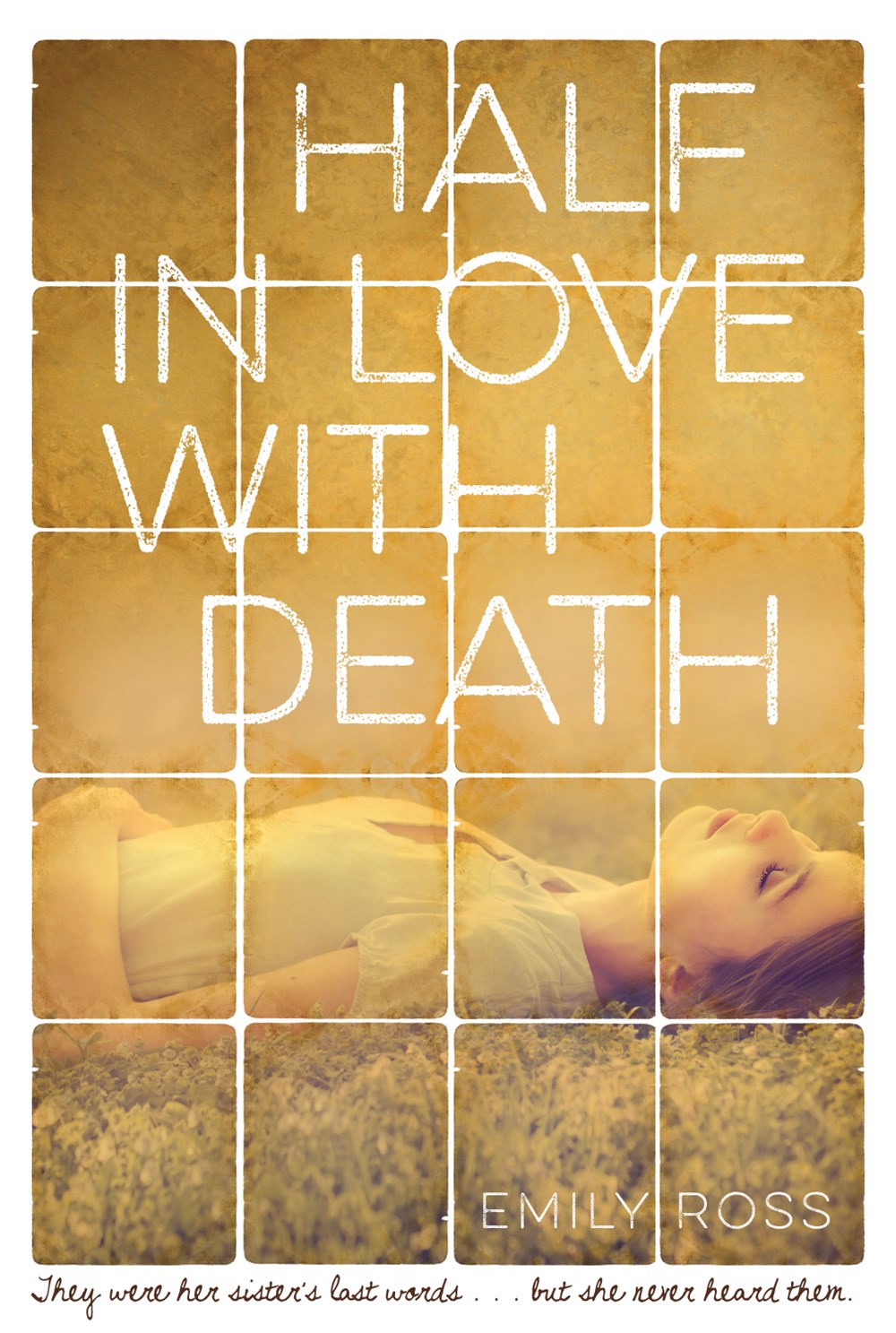 BOOK REPORT for Half in Love with Death by Emily Ross

Talky Talk: We Gotta Get Out of This Place

Relationship Status: What Is and What Should Never Be

The only thing that saves this from being a generic “pretty white girl lying in a field” is the vintage filter and the white lines reminiscent of old photographs. It doesn’t even make sense in the context of the story, because it takes place in Tucson. There are a lot of things in Tucson, but bucolic fields of lush grass and clover are not one of them. (I guess that could be her front yard, but when I look closer, the greenery looks like kale and seems even more ridiculous.)

Caroline’s sister has disappeared, and her whole life is falling apart. While she’s sure her sister is in California, pursuing her dream of becoming an actress, her parents are fighting, her mom might be having an affair, and the police are ignoring their best leads.

Jess’ charismatic boyfriend Tony is the only one who believes Caroline, and he’s promised to help her find her sister. Under Tony’s guidance, Caroline becomes “Caro” and tries on aspects of her sister’s life while she tries to figure out why her sister left. But can she really trust Tony?

This story is based on the real-life “Pied Piper of Tucson” serial killer.

Caroline is…hopeful. Hopeful that her sister isn’t dead, and hopeful that her sister’s boyfriend is interested in her. While these are both understandable enough characteristics, they’re also her defining ones. Caroline thinks of herself in Jess’ shadow, and I can see why: her sister is missing during the entire book and still manages to have more personality than Caroline.

I was so prepared for Tony to actually be charismatic and sexy (because let’s face it, plenty of sociopaths are, serial killers or not), but instead, he was a strung-out creeper who basically had red flags sprouting from his (what I pictured to be) limp, greasy hair.

Talky Talk: We Gotta Get Out of This Place

On one hand, Emily Ross’ prose can often be gorgeous. I loved this description of a drive-in movie theater: “It was finally dark out. The coming attractions were probably already rising like giant ghosts from the desert….” She’s also got some great descriptions of 1960s clothing, which are like candy for a historical fashion nerd.

On the other hand, her dialogue and storytelling doesn’t quite match up. It might be because Caroline is too naïve (or, dare I say it, stupid) to function, it might be because the pacing is off, but the story itself never really lives up to its promise. Too often, the story feels pieced together from 1960s cliches: flower children! Drugs! Parents still stuck in the ’50s! Fashion! Vietnam! It’s like there’s a checklist Ross had to hit, and it’s not done in a particularly artful way.

Despite what I said about the ’60s checklist, the reason the ’60s are so compelling is because there was so much going on: amazing music, war, protests, counterculture becoming mainstream, feminism, civil rights, mod style, even a presidential assassination. It’s been so mythologized, though, that it takes a deft touch to make it real once more: more Mad Men, less The 60s. (Does anyone remember that delightfully execrable TV movie?)

Yeah, I’m calling it a bonus factor! I know I’m not the only one who likes true-crime novels, so I had high hopes for this one, since it was based on a real crime spree. I’ve always found it fascinating to try to get inside the head of someone who thinks, “gee, I’ll just murder someone today,” like Elle Woods decided to go to law school. (Fascinating from a safe distance, mind.)

Relationship Status: What Is and What Should Never Be

Book, I really, really wanted our date to be good, but while you were rambling on about nearly drowning and therefore gaining mystical powers, I was fidgeting in my go-go boots and miniskirt. The only thing worse than a bad date is a bad date who murders people after giving them a dull lecture about why and how he did it. I think I might change my phone number…and address…and state.

Half in Love with Death will be available on December 18.