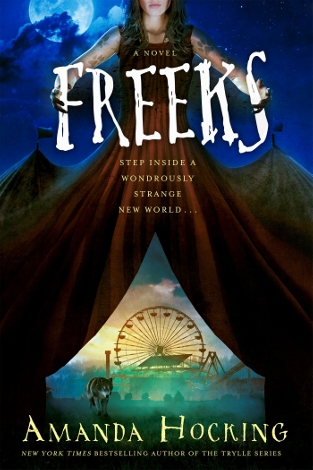 Aside from the literal “under her skirt” commentary this cover elicits, I like it—the mysterious tattooed girl, a full moon, a carnival, and a lone wolf are all elements that scream “read me, Jennie!”

It’s the spring of 1987. Mara is eighteen and part of a traveling carnival, where the performers have more abilities than meet the eye—in fact, Mara’s mother is a necromancer, although Mara herself doesn’t seem to share that talent. Every week or so, the carnival rolls into a new town, gets paid, and rolls right back out onto the road. It’s a lonely and impoverished existence, but the “freaks” have made a family among themselves.

Everything changes when they get to Caudry, a small Louisiana town that somehow feels off. When a shadowy creature starts attacking members of their crew, they’re torn—do they stay and get paid, which they desperately need, or do they fight off the creature with what’s left of their dwindling powers?

Meanwhile, Mara meets Gabe on the first night, and although she knows their romance can’t last, there’s something about this guy that makes her wish it could.

It’s funny—even though the reader is in Mara’s head the whole time, I didn’t feel like I knew her all that well. Aside from the carnival, I’m not sure of her interests, if she has any hobbies, if there were any parts of the country she particularly enjoyed—the closest I got was a glimpse into her musical taste and fashion sense (both of which I dug). She’s a little bit of a badass and definitely has her own mysterious loner thing going on, but would we be friends? I couldn’t tell you.

I thought I was going to hate the romance in this book when Mara and Gabe are making out within the first thirty-five pages. (Instalust is a thing, but damn, that was quick! Maybe I’m just jealous on behalf of my own 18-year-old self.) Over the course of the book, though, Gabe and Mara’s relationship blossoms pretty realistically (and sexily) for a ten-day span. It’s still very quick, and has a touch of impulsivity, which is to be expected in a high-stakes setting.

I liked Freeks on several different levels (see: Bonus Factors!), but it suffers from awkward pacing. The ending comes altogether too quickly, although it doesn’t come out of nowhere (I thought it must be a series starter, about 50 pages from the end, because I wasn’t sure how she could wrap up all those loose ends). The author has foreshadowed all of the big reveals, but the book would have benefitted from spacing them out a bit more and giving them their due.

Hocking is great with setting an eerie atmosphere, although some of her 80s references would probably fly right over the target markets’ heads. It’s also a story that benefits from the lack of cell phones and other technology we now take for granted—something I can appreciate, because I still remember a time when I could get into a hell of a lot more mischief than the Kids These Days can. (Cell phones are parental leashes!)

I’m a sucker for all things carnival-tinged, from the Santa Cruz Beach Boardwalk (where Lost Boys was filmed!) to HBO’s Carnivàle. There’s something eerie and romantic about what happens behind the scenes. Plus, the tarot card images in the book add a little extra flair, especially if you know their meanings.

Gabe is the perfect MLD—he has secrets, but he’s no Jordan Catalano, toying with Mara’s heart. Thank heavens.

There’s more than a little diversity in here, including Mara’s multicultural heritage and Gabe’s half-Venezuelan, half-white makeup—while Caudry seems pretty whitewashed and serves to further the “other” carnival folk. There’s also socioeconomic diversity; Gabe is filthy rich while Mara’s Winnebago is falling apart at the seams, held together by duct tape and prayer.

He’s not quite who I pictured for Gabe, but he’s close.

Relationship Status: Lurking in the Shadows

Book, I liked you, but I don’t think this is love. Taking a cue from you, actually, I think I might just lurk in the shadows and see if some of your rough edges get smoothed out in your next relationship or two. If so, I know a Ferris Wheel that’s a prime spot for some literary swoonage.