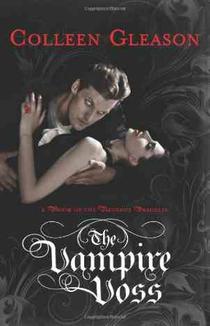 A long time ago, author Colleen Gleason asked for my opinion on what constitutes a “dark" romance. At the time, she was publishing her Gardella series, which followed a vampire huntress through her first season in Regency London. While Gleason writes vampire romances, which are often described as "dark," I'm not exactly sure what prompted the question. But it's stuck with me for awhile, this idea of trying to define the term “dark” when applied to romance.

What exactly do people mean when they discuss a romance (or any piece of entertainment, really) being "dark?" "Light" is relatively easier to define: funny, friendly, not painfully emotional or wrenching. The opposite could be used to define "dark" romances, I suppose—serious in tone, emotionally powerful, potentially painful. Or perhaps "dark" romances are merely those that always take place at night, when the vampires come out.

Interestingly, the definition for dark romanticsm lends some assistance in my attempts to answer Colleen's question (and seriously, this question is from my inbox, like, three years ago. I'm sure she's going to read this column and wonder what the hell I'm talking about).

Dark romanticism features characters who are "prone to sin and self-destruction," and explore themes of evil, or "anthropomorphized evil in the form of Satan, devils, ghosts, werewolves, vampires and ghouls." Dark romanticism can feature failure, mystery, darkness, evil, and moral and emotional struggles that leave the characters in a worse position than they started in, and a long, long way from happily ever after.

Sort of the opposite of anything labeled "romance," isn't it?

My interpretation of "dark romance" is that this particular romance features some definite bleakness and unhappiness, whether it's on the part of the characters or their circumstances. Ahoy, here be some pain, sadness, and drama afore the happy ever after. And as a result I have to be in a specific mood to take on those types of books. Obviously, if I'm looking for comfort and humor, I don't reach for the dark and wrenching. In my terminology, a dark romance is one wherein there's going to be a happy ending eventually, but it'll hurt a bit first, for everyone involved, including me, the reader.

When I think of dark romance, for example, I think of Nalini Singh, whose world-building in her Psy-Changeling series (Berkley) and her Archangel series (Berkley) includes some truly painful struggles and, especially in the Psy series, cold, emotionless bleakness. Singh is gifted at creating circumstances that are so difficult they both keep her characters miserable and apart and make the reader wonder how she'll create a happily ever after for them by the end of the book.

I asked folks on Twitter for their definition and recommendations for dark romances, and the responses were varied. Heather Greye said that she can't personally define it but "Anne Stuart's Ice books were the first thing that came to mind for me. Dark & twisted, indeed." Kiersten Krum and Con Martin backed her up by echoing the Anne Stuart recommendation.

The term is often used exclusively with paranormal, apocalyptic and urban fantasy romances, and that is not always the genre in which you find dark content. Anna Campbell, for example, writes dark emotionally gripping romances that are set in Regency England. Inez Kelly's new contemporary romance release, Sweet as Sin, (Carina Press, 2011) which has received some amazingly positive reviews, features a hero with a terribly haunting emotional past (which is, alas, the reason I have some trepidation about reading it. I want to, but am honestly scared of my own emotional reaction). Author Jaci Burton recommends Larissa Ione and Lara Adrian as two authors who write "twisty, angst, heavy, deeply emotional" dark romance as well.

But I think author Jessa Slade said it best, that dark romance is "when love doesn't 'save the day.' Just saves their souls. Day is still f'd." Yup. That could sum it up well, regardless of genre.

In the case of defining "dark romance," it's often easier to come up with examples than an agreed-upon definition. What dark romances do you adore, and, more importantly, how would you define the term?