Spinning Wheel Got To Go Round 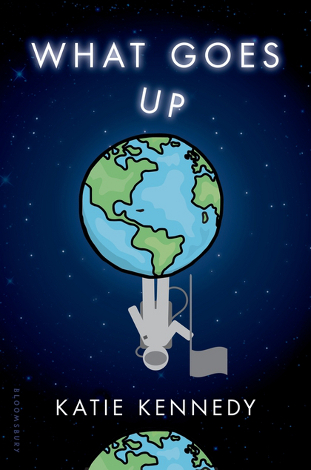 BOOK REPORT for What Goes Up by Katie Kennedy

Excuse me, Mr. Astronaut, but you might want to mosey North a little. I know how gravity works, and all, so I’m not afraid you’re going to fall off, but your flag would look a lot better at the North Pole.

Two hundred high school students have been chosen to compete for two open spots in NASA’s Interworlds Agency (IA), a scientific organization created to deal with the implications that come with the universe’s infinite nature. The best and the brightest of their schools, the students will be faced with tests and challenges to prove that they have what it takes.

At the end of the testing period, Rosa and Eddie are at the top of the competition, and nab the coveted spots on IA’s Team 3, along with two understudies, Brad and Trevor. Although the kids are all expecting to finish up their last year in high school, then college, before they see any real action, the universe has other ideas. And when the “aliens” arrive, everyone is surprised to find that they’re literally just like us—humans from an alternate Earth.

In high school, I had lofty goals: I went to college with the plan of becoming a mechanical engineer and translating my degree into a career in the aerospace industry, hopefully ending with me becoming an astronaut. However, Physics for Engineers taught me—very quickly—that I wasn’t quite cut out for such a career. (And I’m totally OK with that, 10+ years after the fact.) I doubt I would have been a contender for one of the IA spots, as I was decent at science and math, but not spectacular. But I definitely would have had major envy over Rosa, Eddie, Brad, and Trevor’s opportunity to work with NASA and IA. I’m still holding out hope that trips to outer space will become more common for us regular folk in my lifetime.

From the moment Eddie walks into Rosa’s life, it’s pretty obvious that the two of them are going to have something. It takes a while to get there, and though I knew it was coming, the chemistry is lacking. Their relationship is cute, but the story isn’t made better because of it, and it feels a little like a second thought to the larger plot.

The term science fiction is a pretty general one these days, but in What Goes Up, Katie Kennedy goes back to its roots. The book is filled with actual science—or as actual as a non-rocket scientist like me can tell—and set in a near-future world with slightly advanced technology. (For example: cell phones in the book have a “hover” mode which makes taking selfies SO much easier.) Most of the terms went over my head, but they did add to the truth of the story. Had all of the science been dumbed down, the plot of the book wouldn’t have seemed nearly as realistic.

When the action picked up in the second half of the book, however, the science kind of went out the window. I’m not sure if it was because the plot veered much more into fiction territory, but I think there could have been a better balance between the halves.

The idea that there are an infinite number of dimensions in which a version of you exists is a fascinating one. Maybe in some dimension there’s a me who stuck it out through Physics for Engineers.

The trainees’ teacher is an astronaut named Reginald Davis, who likes to torture the kids—in a well-meaning and non-violent way—and sometimes talks about himself in third person, particularly when he’s done something stupid. He’s a delight.

Relationship Status: One and Done

Our time together started out really fun, Book, but in the latter half of the evening your stories lost a little of the spark they started with. I don’t like to insinuate that a person can’t hold their liquor, being a lightweight myself, but there was a distinct looseness to the second half of our date that wasn’t there before we ordered another round. I’m sorry to say it, but I think we’re better off going our separate ways.

What Goes Up will be available July 18.