Sugar And Spice And Everything Not Nice 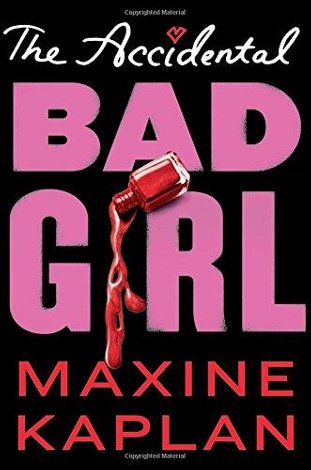 BOOK REPORT for The Accidental Bad Girl by Maxine Kaplan

I’m always fond of covers that eschew typical stock photography in favor of bold type and even bolder symbolism. The color a girl chooses to paint her fingernails should have no bearings on her values, and yet red nail polish has become some sort of dog whistle for promiscuity. Here, the black and hot pink combined with the nail polish bottle are giving me strong Betty Rizzo vibes, and drawing inspiration from the queen of bad girls? Well, there are worse things a book could do.

Kendall Evans is hot, she comes from a well-to-do family, she makes good grades at her Brooklyn prep school, and she’s popular. At least, she was popular. Until the tail end of junior year when the entire senior class walked in on her hooking up with her best friend’s ex, Grant Powers. No one cared that Grant was hooking up with his ex’s best friend, but Kendall is starting her senior year completely ostracized. The one thing keeping her head above water is that she’s been accepted to an elite astronomy school and cannot wait to bail from Howell High in December to spend her final semester of high school in Texas.

But when someone hacks into her Facebook account and frames her for stealing drugs, Kendall finds herself in the middle of a tangled web of Ecstasy dealers, led by a Columbia student named Mason who is intent on turning Kendall into his protégé – even if he has to blackmail her to do it. Kendall has to tap into a side of herself she didn’t know existed, fueled by her anger at how she was treated after the Grant incident, to survive. Being the bad girl is surprisingly refreshing, until Kendall realizes she might be involved in something far worse than she ever imagined.

When the school year starts, Kendall is a bit withdrawn. She’s so nervous about what people will think of her, fidgeting with the buttons on her cardigan because even the sight of cleavage will fuel the slut-shaming she’s received since hooking up with Grant. But once Kendall realizes that she doesn’t have to be ashamed, that she can be strong and confident and bad ass and angry—THAT Kendall DNGAF and shall henceforth have all my BFF Charms. There are few things as satisfying as watching a girl who has every right to be angry accept that anger, rip up all her cardigans, put on a pair of skin tight black jeans and dark red lipstick and face her damn day like a boss.

With few people to turn to in her new life as an outcast, Kendall suddenly starts to notice similar outcasts, including Michael Gilbert, or Gilly, who is a bit of a surly nerd and can usually be found in the dark depths of the auditorium, acting as stage manager for the theatre department. Gilly has long harbored a crush on Kendall, which makes him both a little resentful of her and a little cute around her. I had mixed feelings about Gilly. He was both a good friend to Kendall and, at times, just like Grant and Mason and every other guy in this book who felt he had some sort of ownership over her. Did that stop their swoony moments from being swoony? No. Well, not totally, at least.

In form, The Accidental Bad Girl is your typical female-first-person contemporary. It’s fast-paced, fun, and has all the tenants of a good contemporary: a little bit of swoon, the formation of an awesome new friendship, familial ups and downs. But what makes this book surprising is its darkness and heavy subject matter. Maxine Kaplan is a private investigator (how cool is that?!), so the unexpected noir aspects of this book have a serious authenticity. This is a book that manages to give you both the things you love about contemporaries but also turns tropes on their heads, for a refreshing spin that will keep surprising you until the final pages.

While it’s probably obvious that this book deals heavily with drug usage, mostly Ecstasy, there is a lot of conversation about date rape drugs, and a plotline in which a character is drugged and raped, and that rape is videotaped. Discussion of rape is not a trigger for me and I still found it hard to read, so please tread lightly if these topics are triggers for you.

Imagine, if you will, a book that takes a long, hard look at the way girls are treated for having sex, especially in comparison to the way that boys are treated for the same totally natural feelings. The Accidental Bad Girl tackles those issues head on and without apology. I kept highlighting passages that made me want to pump my fist in the air, like this one:

“What really killed me about this whole mess was that everything I was, everything I had ever been—athlete, honor student, class officer, friend, smart, social, responsible, funny—had been wiped out the second I had sex.”

Book, you’ve got moxie and a strong message that I’m 100% on board with. Let’s start a girl gang. I’ll get us matching jackets, if you’ll let me borrow your brass knuckles. We’ll do cool stuff like look out for each other and be supportive of one another’s goals. It’ll be so bad ass.