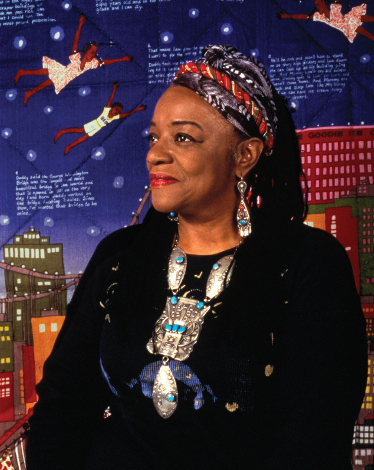 Twenty-five years ago, Faith Ringgold brought readers her debut picture book, Tar Beach, which won a 1992 Caldecott Honor and the Coretta Scott King Award for illustration. Tar Beach was originally a story quilt Ringgold had created, one that combined autobiography with fiction and transcended art forms—storytelling, quilting, and painting, all in one. (You can see the quilt here at the Guggenheim’s site.)

The book, also a mix of autobiography and fictional narrative, told the story of Cassie Louise Lightfoot, a young African American girl who dreams of being free and going anywhere she desires, flying through the air—even flying over the new union building her Daddy is working on. “Daddy is going to own that building,” Cassie notes, “cause I’m gonna fly over it and give it to him. Then it won’t matter that he’s not in their old union, or whether he’s colored or a half-breed Indian, like they say.” This month, Random House released an anniversary edition of the beloved, award-winning book.

“Winning the Caldecott [Honor],” Ringgold tells me in an interview via email, “opened the door to publish many more books.” Earlier this month, in fact, she saw the publication of her 18th children’s book, We Came to America, a book that celebrates the United States as the so-called melting pot it is. “I wanted to represent the many cultures that make America so rich and diverse,” she tells me. “I researched the colors and patterns of their many cultures.”

Dedicating the book, rendered in acrylics, to “all the children who come to America,” wishing them “peace, freedom, and prosperity in their new home,” it serves as a tribute to those who traveled far and wide—or were brought against their will (“some of us were brought in chains, / Losing our freedom and our names”)—to this country. Those who arrived brought music, stories, dance, food, fashion, sounds, art, and patterns, and Ringgold celebrates it all in bright, heavily saturated hues that pop off the page. This book is also an outstretched hand to those who still arrive on American soil today: “In spite of where we came from,” it closes, “Or how or why we came / We are all Americans / Just the same.” It’s especially timely to read now, given the often polarizing conversations about immigrants and their heritage in this country. It’s a welcome antidote to the age of Trump and the angry, extreme rhetoric that can rear its head in political discussions today.

Ringgold lives and works in California and New Jersey but was born in Harlem in 1930. Long before she became a professional artist, she taught art in public schools. I ask her if she misses teaching, but it turns out that she fills that need in other ways. “I do love the creativity and energy of children,” she tells me. “My foundation, the Anyone Can Fly Foundation, is devoted to teaching children about the African American artists that have been left out of the historical canon.  We (the ACFF and myself) have a group of kids at Thurgood Marshall Academy whom we work with. These kids keep my connection to the little ones current.”

Social and political activism has always been a central part of Ringgold’s work and life, particularly around issues of women and race. She did her first political paintings in 1963 and hasn’t stopped since. When I ask about her recent activist work, she mentions a possible new series, as well as a children’s book devoted to aging. “I have a nice collection of unpublished short stories for children that I may dust off and take another look at,” she explains, “but the book for children on aging is number one.”

“I am also busy,” she adds, “organizing and preparing my archives for the new Faith Ringgold Study Room at the David C. Driskell Center at the University of Maryland.” The Driskell Center, as noted at its site, “provides an intellectual home for artists, museum professionals, art administrators, and scholars, who are interested in broadening the field of African Diasporic studies. The Driskell Center is committed to collecting, documenting, and presenting African American art as well as replenishing and expanding the field.” Ringgold has also played with multi-media, adding that she developed an art image game, one based on Sudoko and available on iTunes and Google Play. It’s called Quiltuduko (and I hear that it also includes some of her own original music).

Something tells me that nothing will slow down Ringgold any time soon. Lucky for her readers, she’s got more stories to tell, more art to make, and even more young readers to inspire.

WE CAME TO AMERICA. Copyright © 2016 by Faith Ringgold. Illustration published by permission of the publisher, Alfred A. Knopf, New York.