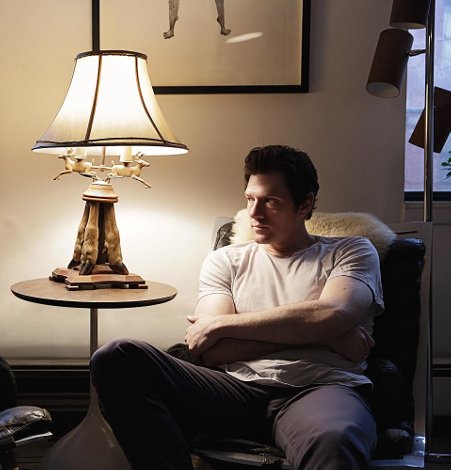 Adam Rapp is no stranger to the arts. He is a novelist, playwright, film director, screenwriter, and musician. He is a Pulitzer Prize finalist (2005’s play, Red Light Winter), and his young adult novel Punkzilla was awarded a 2010 Printz Honor. Kirkus reviewers over the years have noted his talents in “pushing the boundaries of fiction for teens,”as well as authentically rendering disenfranchised characters.

But this month Rapp tries something new – a graphic novel. Decelerate Blue, illustrated by Mike Cavallaro, tells the story of a world where speed and efficiency are the keys to survival. “Go” punctuates the end of each piece of dialogue, as speakers in this world are required to prompt responses. No time for contemplation, after all – or even any word not a contraction. Literature is condensed and compromised, “clipped and cleaned.” Everything is monitored. Everyone is on the grid. There is Hyper High; there are megamalls (with Hyper Now, Fast Fries, and Prompt Pants); and everything is ruled by the Guarantee Committee.

Angela Swiff, the book’s 15-year-old protagonist, begins to question it all. She’s unsure about her New World Quick Living class – and this entire way of life. Angela is well aware of the “antique version of some novel,” as her father puts it. “A novel of all things.” It’s Kent Van Gough’s Kick the Boot, the essential novel for the New World dissenters she eventually joins. In this underground universe, Angela sees The Great Wall of Adjectives (deliciously long words) and finds her people in the resistance. She even falls in love with Gladys, making this graphic novel (and its February 14th release) well-timed for the week of Valentine’s Day.

I asked Rapp via email about this book and its darker vision for America.

I'm struck by the vivid, alarming dystopian future of this story. Can you talk about how the story came to you and when you knew you wanted to write it?

I live in New York City, in the East Village. I’ve been here for 26 years. New York is a big pedestrian city, and one day—this was probably over ten years ago—I was walking across town and I noticed that people were walking while looking down at their smartphones. And they were doing it well. It was the first time I noticed this phenomenon, and I was struck by the new multi-tasking skill. People walk fast in NYC. There are cyclists, careening taxicabs, city buses, skateboarders, rollerbladers, not to mention other pedestrians to negotiate. This was a new high-level ability I was witnessing. People were texting, answering emails, making Internet purchases, etc. – all this while walking!

Then one day I saw this older Asian man walking very slowly in the Astor Place area. If a fellow pedestrian came toward him—while engaged with their smartphone, head down, thumbs pummeling their smartphone screen—the Asian man would wave his hand right in front of their face. It was startling, but it actually forced people to look up and consider where they were going and whom they might be walking toward. I thought the guy was a genius. He was starting a revolution of sorts. Stop. Look

up. Consider another human being. Connect. I think that was the moment when the idea for the book came to me.

Are there any dystopian or sci-fi stories (from the recent or even distant past) that affected you and/or maybe influenced this story you tell? (In various ways, the book makes me think of Fahrenheit 451, as well as Feed.)

I’m a huge fan of M.T. Anderson, and Feed is my favorite book of his. I think it’s one of the most stunning YA books published in this century. The love story in that novel is an inspiration. I’m also profoundly moved and haunted by Orwell’s 1984, especially right now with what’s going on with our country. The totalitarian surveillance culture in that novel was certainly something I was thinking about during the early stages of Decelerate Blue.

How did you approach the pacing of this story? Specifically, was it a challenge to get the pacing just right for a story about a culture that is hyper-accelerated?

It was definitely a challenge. The notion of slowing a story down is not something that I would normally try and do, as it’s always the goal to get the reader to turn the page, to create narrative momentum, to lean toward acceleration. But once I got into it, I realized that the relationships Angela forges in the underground, this place where time is supposed to slow down, create an emotional momentum. The people in the underground speak more slowly and use longer sentences, but the stakes increase because human connections are forming. Angela falls in love for the first time and, although she’s trying to decelerate, her heart is growing, quickening even. And then the world above ground is moving faster and faster, so there should be a good deal of contrast, once she resurfaces. I’m hoping the reader experiences these shifts. I think Mike Cavallaro, the brilliant artist who realized the visual world of the book, articulates these differences in an exciting way.

What was it like for you to see Mike's artwork for the first time? Did you work in collaboration, or did you submit a manuscript and you only saw artwork when it was complete?

I was stunned by the first drawings. As soon as I saw the character sketches, I knew I was working with an exceptional artist and collaborator. There was very little back and forth. He simply took the world I wrote and ran with it.

Do you hope that readers take away anything particular from this story about our fast-paced world? I'm trying to be careful not to ask about the book's "message," because no one likes didactic literature, and that's not what I think this is. But I guess I'm wondering if you hope this story makes teens, in particular, think about our modern resistance to slowing down.

The main thing I hope readers take away from the book is the notion of valuing the choice to slow down, to take a moment or two a day to think, to actually locate one’s own thoughts that aren’t corrupted/influenced by the onslaught of consumer images, the Internet, and the constant barrage of advertising media. Because when one can truly be with one’s thoughts, one’s pure imagination, then one is truly free. And I think this is a critical time for our culture. And a critical time for the survival of empathy. Teenagers and college students are at a stage in their lives when they’re forming their own thoughts and opinions about the world. Thought is everything, and getting closer to one’s own thoughts without all the noise is the key to making informed, intelligent, empathic decisions.

What's next for you? And will there be another story about these characters?

I have a new novel coming out next year with Candlewick Press called FUM, which is about a giant (she’s 7’2”), sixteen-year-old girl from the Midwest who is besieged by apocalyptic visions that start coming true. She warns her community, but they don’t listen to her and treat her as a pariah.

I’m also working on a new TV series for Hulu about 9/11, which is very exciting, but I’m not allowed to talk about that yet.

Regarding another story about the characters from Decelerate Blue, I’ve never really thought about it. I find the end of the story to be tragic and final, but I certainly love the idea of readers wanting more.