A Tale of Tattoos 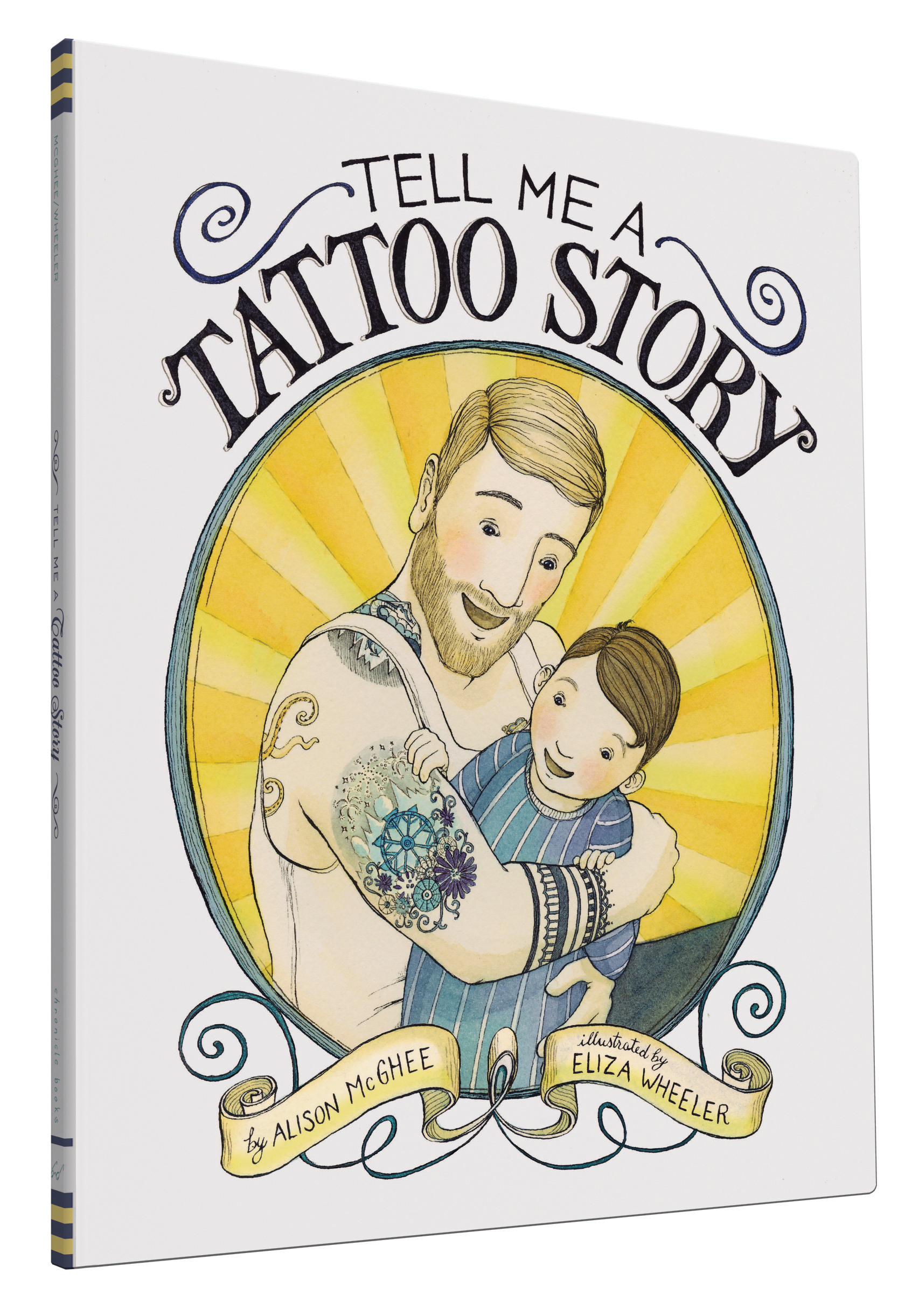 Recently, on social media, I saw someone refer to Alison McGhee’s newest picture book, Tell Me a Tattoo Story, illustrated by Eliza Wheeler and coming to shelves in early April, as The Illustrated Man for wee ones. To be sure, the concepts are fundamentally the same—a person sporting tattoos tells stories for each one inked on him—though in this picture book, we have no commentary on technology, nor do we have stranded astronauts, carnies, invading aliens, or magically animated ink. Instead, we have a tender, but not saccharine, story of familial love in 32 pages.

Kudos to McGhee for this book’s very concept. All too often today, tattoos are attached to hipster culture, but they go back centuries. They’re also wildly popular. In Paul Thomas’ new book (for teens and older), An Unreliable History of Tattoos, he notes cheekily (the whole book is cheeky): “There are now more tattoo studios in most British high streets than there are coffee shops.”

What Alison McGhee seems to know well is that children are naturally curious about art on one’s very skin. In this story, a 4-year-old boy asks to see his father’s tattoos. The story is told from the father’s point-of-view; we only hear his side of the conversation, and he often, for the reader’s sake, repeats the boy’s questions: “You wanna see my tattoos? Why, little man, you always want to see my tattoos. Here we go then.”

One tattoo, near his neck, is of Smaug from The Hobbit. The dragon isn’t named specifically in the story, mind you, but the man shares with his son the memory of his mother reading to him from that book. Illustrator Eliza Wheeler brings us that visual flashback—the man as a boy, sitting outside on his mother’s lap, while laundry hangs on the line over them—in warm rust colors. The tattoo on his wrist says simply, “Be kind,” words the man remembers from his father. “I want to make sure I always remember it,” he tells his son. Another tattoo reminds him of the day he met his wife, the boy’s mother. Another is a reminder of his military service “(the longest trip I ever took”). And the final one is the boy’s birth date. This is tattooed on the man’s chest—right over his heart.

Each one of these interactions between father and son, during which the man tells the story of the tattooed image, is followed by a flashback, the man remembering in detail. Wheeler colors the present-day moments in cool hues; there is a muted grey-blue that permeates those illustrations as a whole. The memories warm up with a bit more color, though still relatively muted—more oranges, some warm purples, and rusty reds. Father, son, and mother—when interacting in present day or even in the past (readers flash back, after all, to the boy’s birth)—constitute a warm, loving family. The boy looks to his parents with great affection, and these young parents are clearly still in love—with each other and with parenthood.

Each memory tells the larger story of a man who loves and values his family, going back to his own upbringing and back to present day with the family he has now in his wife and son. Wheeler brings this world to life via assured and graceful lines—in India ink and watercolors—and the flashbacks to the man’s memories broaden the book, bringing in light, air, subtle colors. The tattoo-filled endpapers delight. It’s a not a picture book breaking any new ground, but what it does, it does so well.

Children (depending on their age and temperament-at-the-moment) like to hear family stories from a parent. It allows them to see their caretaker in an all-new light. They especially like to be reminded that they are loved, that their parent sees them as special and cherishes their time together. This story does both of these things.

And that makes it a particularly sweet story for sharing right before bed…whether you have your own ink or not.