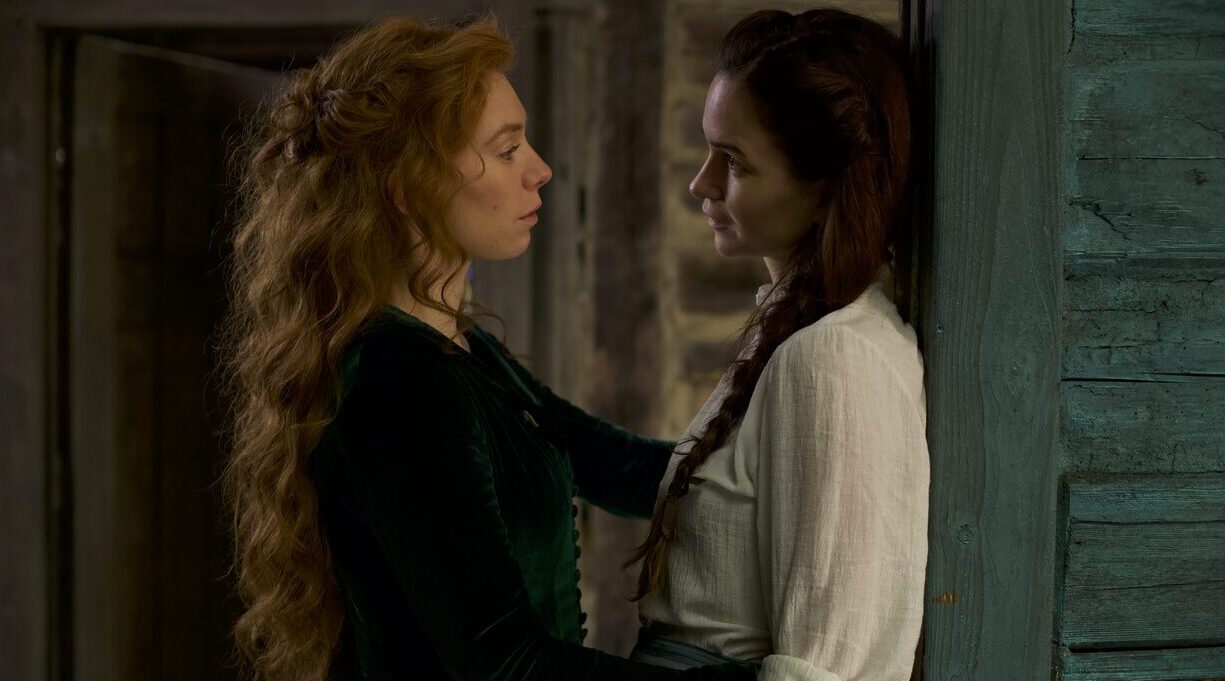 Vanessa Kirby and Katherine Waterston in ‘The World To Come.’ Photo by Toni Salabasev/Bleecker Street

In a 2012 interview with One Story, Jim Shepard said that that he knew almost immediately” that his short story “The World To Come” would be a love story—“the question at that point became how repressed a love story it would be,” he explained. It’s a telling statement, as the tale, which appeared in Shepard’s Kirkus-starred 2017 collection of the same name, is about two married women who have an affair in the 1850s, and it goes to show how same-sex relationships in historical dramas are almost always portrayed as tragic. It’s a very rare drama in which pre-Stonewall gay or bisexual men and women are allowed to have happy relationships; the impulse to burn it all down, à la Portrait of a Lady on Fire, is often too great for writers and filmmakers to resist.

Just two years ago, for instance, Annabel Jankel, the director of a movie adaptation of Fiona Shaw’s novel Tell It to the Bees, took it upon herself to alter the book’s happy ending. In the original story, set in the 1950s, a lesbian couple leaves their bigoted town in the United Kingdom to find happiness in Italy; in the movie, the two women separate and never see each other again. Jankel justified it by saying, in an interview with AfterEllen, that a sad ending was “more true to the time”—as if happily-ever-afters were simply impossible for same-sex couples in the past.

Shaw, as one might imagine, was not pleased with this alteration. But Mona Fastvold, the director of a new film adaptation of “The World To Come,” didn’t need to change a thing to make her movie a grim exercise; it’s right there in the source text. The film stars Inherent Vice’s Katherine Waterston, Pieces of a Woman’s Vanessa Kirby, Catch-22’s Christopher Abbott, and Oscar winner Casey Affleck. (It’s worth mentioning, too, that this women-centered film was co-produced by Affleck, who was accused of sexual harassment by two women in 2010.) It’s set for a limited theatrical release today and will be available on video-on-demand on March 2.

Fair warning: there will be spoilers in this review. The short story and film both center on the journal entries of a woman living on an upstate New York farm sometime in the 1850s; she’s unnamed in the text but called Abigail onscreen. She and her husband, Dyer, struggle with grief over the death of their only child and are barely able to make ends meet on their farm during a brutal winter. Abigail grows close to a neighbor, Tallie, who frequently visits when Dyer is away; Tallie’s own husband, Finney, is paranoid and implied to be abusive. The women’s deep friendship provides them with a much-needed escape from their problems, and it eventually leads to a secret romantic affair. Then Tallie and Finney suddenly move away; their empty house, Abigail finds, contains evidence of violence. When she and Dyer finally track the couple down, Tallie is dead, and Finney claims—unconvincingly—that illness took her. Abigail, it’s strongly implied, will be grieving for the rest of her days.

The actors are all at the top of their game, with Waterston, as Abigail, a particular standout. The film is also gorgeous to look at; indeed, the rich, deep-focus images of New York farmland are so pleasant throughout that they sometimes undercut the misery of the farmers’ everyday lives.

The movie is very faithful to its source, often quoting long stretches of the text verbatim. (Shepard and novelist Ron Hansen adapted the story for the screen.) There are a few changes, however: At the end of Shepard’s story, Tallie is simply gone, buried somewhere in the woods, which is truly chilling; in the film, Tallie’s corpse is still in bed, allowing Abigail to melodramatically embrace her one last time. Also, the movie adds a bit of narration, just before the credits, in which Abigail vows to someday exact violent revenge on Finney for what he’s done. Perhaps the filmmakers realized that they had to do something to make the ending less unsatisfying. In the end, though, it’s just another in a long series of historical dramas that equates same-sex love with sadness and misery—a series that really should have been canceled by now.