A Thing of Wonder 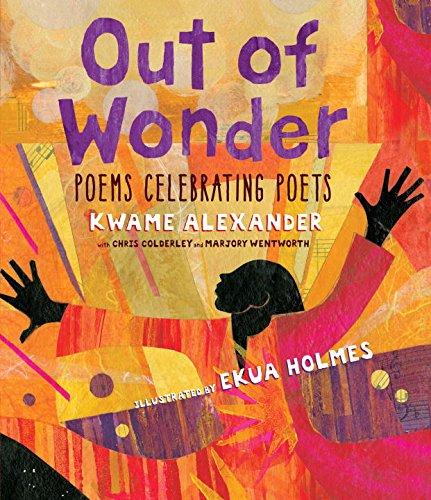 Here is something poet and Newbery author Kwame Alexander writes in the preface of his brand-new book, Out of Wonder: Poems Celebrating Poets, coming to shelves in March. I think I literally applauded when I read this, since sadly, poetry is sometimes the neglected child in language arts educational programs across the country:

“I remember reading and reading lots of poetry in first and second grades. I could
barely contain my excitement when I ‘got’ a poem and could explain it to someone
else. Sometime between then and high school, poetry, for the most part, vanished
from the classroom. What remained was incomprehensible. And that was no fun.
Happily, in college I rediscovered the magic of poetry. I don’t want you to have to
wait that long.”

(When Gene Luen Yang is finished with his duties as National Ambassador for Young People’s Literature—though I certainly don’t want to rush him on account of the good work he’s currently doing—can we have Kwame? Please?)

Out of Wonder is a collection of original poetry, illustrated by Ekua Holmes and written by Kwame and two other poets. The task they set themselves here, as you can gather from the title, is to honor the work of fellow poets they revere the most. This beautifully-designed, 56-page bookincludes original creations from Kwame, Canadian poet and elementary-school teacher Chris Colderley, and the Poet Laureate of South Carolina, Marjory Wentworth.

In the preface, Kwame also notes that he, Chris, and Marjory had two requirements for the poets they would celebrate in this book: “First, they had to be interesting people, and second, we had to be passionately in love with their poetry.” Turns out they are passionately in love with the work of poets from many spots on the globe (America, Uganda, Australia, what is now Afghanistan, Chile, Canada, Japan). These are the writings of poets they classify in the following way: ancient and foreign-language poets (Bashō, Rumi); nineteenth-century poets (Emily Dickinson); twentieth-century poets (Gwendolyn Brooks, E. E. Cummings, Robert Frost, Chief Dan George, Langston Hughes, Pablo Neruda, Okot p’Bitek, William Carlos Williams, and Judith Wright); and contemporary poets, some who “still walk the streets of San Antonio and New York City today” (Maya Angelou, Sandra Cisneros, Billy Collins, Nikki Giovanni, Terrance Hayes, Walter Dean Myers, Naomi Shihab Nye, and Mary Oliver).

There is a joy that emanates from these writings, yet I imagine it’s no small feat to honor the work of a poet you admire by taking his or her style and particular rhythms and incorporating them into your own work. That is what the three poets do in part one, “Got Style?” Kwame honors Naomi Shihab Nye in a poem about writing poems that pays tribute to Nye’s phrasing and unique meter, and he does the same with E. E. Cummings and Langston Hughes. Marjory honors Robert Frost, and Chris pays tribute to Bashō and Nikki Giovanni. Each poem here manages to capture the stylistic essence of the poet being honored. Yet Kwame, Chris, and Marjory also make each poem their own; each has their distinct personalities stamped upon it.

In part two of the book, they incorporate into their tribute poems the feelings and themes of the poets they honor. There’s a basketball poem for Walter Dean Myers; a nature poem for Pablo Neruda and Mary Oliver; a poem celebrating Billy Collins’ ability to note the extraordinary in the ordinary (“Pay attention to the smallest things … Our lives are made from these things”); and more. Part three of the book is a series of poems, each serving as a heartfelt thank-you to some of the poets whose work Kwame, Chris, and Marjory most appreciate. Marjory’s tribute to Rumi will, for one, wake you right up. I love how, in the book’s closing biographical notes (short bios for each poet the three honor in the book), Kwame writes: “As far as poets go, Gwendolyn Brooks is real cool.” (I can only assume Kwame wrote her closing biographical note, since he is the one who honors Brooks with his own poem, which is firecracker good: “Womanblack / Smile like moon / Bronzeville lady / Gone too soon.”) That’s to say: there is an enthusiasm for poetry that oozes from this book. It’s utterly enchanting and a breath of fresh air.

Now, I’ve never worked in a publishing house with editors and art directors, but I’d like to imagine that when illustrator Ekua Holmes’ final illustrations for this book arrived, the folks at Candlewick Press gathered around and stared in stunned, hushed silence for a bit, followed by a moderate amount of ooh’ing and aah’ing. Then I hope they patted themselves on the back and raised a glass to each other for having snagged her artwork for yet one more book. Her collage illustrations here are beautiful and evocative. I think my jaw dropped on several spreads – definitely on the aforementioned Gwendolyn Brooks spread, where we see a blues singer at a piano. (Brooks often incorporated the rhythm of the blues into her free verse work.) The woman knows how to compose a spread, but then fans of the 2016 Sibert-winning and Caldecott Honor book Voice of Freedom: Fannie Lou Hamer: Spirit of the Civil Rights Movement, written by Carole Boston Weatherford (and also published by Candlewick), already know how talented she is. (Holmes also won the 2016 John Steptoe New Talent Illustrator Award Winner for that book.)

Out of Wonder is a thing of wonder, a book for all ages that celebrates some of the world’s best poetry – and the incredible minds that brought it to life. I’m glad Kwame refuses to let some readers wait till college to experience the joy.