Time with the Grands 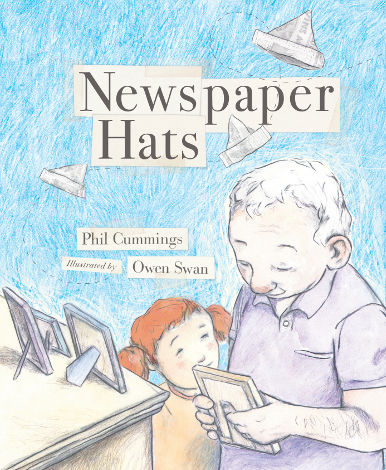 The bond with a grandparent can be one of the most powerful ones in the lives of children, and there’s no shortage of picture books on shelves about intergenerational ties. I’ve seen a few new ones I want to discuss today, though the last one is actually a slim novel. One thing I like about all of these books is the way the elderly characters are conveyed in the illustrations. It’s hard to get it right; I know I’ve seen some picture book depictions of the elderly that try too hard to stress their age, making the lines in their faces a bit too loud and making them appear, in fact, quite scary to children. That doesn’t happen with any of these I’ve got here today.

On the subject of lines in faces, let’s start with Simona Ciraolo’s The Lines on Nana’s Face, coming to shelves in October. In this story, a young girl (looking barely old enough to have just exited her toddler years) attends her Nana’s birthday party, knowing that her grandmother enjoys the celebration. However, she notes: “[S]ometimes it looks like she might also be a bit sad, and a little surprised, and slightly worried, all at the same time.” (If that doesn’t sum up the face of someone who has lived on this strange planet for a long time, I don’t know what does.)

After Nana tells her that her face may appear that way because of all of its lines—and that, furthermore, she loves these lines, because “it is in these lines that I keep all my memories!”—the girl puts her to the test, asking what each line means. Nana then recalls a small handful of memories from her life. What I like is that the memories aren’t exactly what you’d expect. Maybe it’s just me, but I suspect the typical reader would presume she would recall marriage, births, perhaps deaths in her life, etc. To be sure, one memory does involve the night she met her husband. But I found the memories delightfully surprising in that each one involves her red-headed sister in some way, making this a poignant tribute to sisterhood as well. Even the memory of meeting her husband (a roller coaster ride that thrilled him, yet terrified her) involves her sister, sitting right behind her on the coaster. A childhood memory involves her (the time they found their lost cat, complete with some newborn kittens attached); a teenage memory includes her and two of their other friends (or perhaps family members); another memory is all about the time she sewed her sister’s wedding dress; and the frown lines at her lower mouth are for “the first time I had to say goodbye,” and we see that Nana is young, all packed and about to drive to a new home with her now-husband. She weeps as she hugs her sister and says farewell. In a closing wordless spread, set back in the present, we see Nana with her family, about to eat her birthday cake. Sadly, we see no elderly red-headed sister nearby, though her husband still seems to be with her.

The intimate, present-day moments with granddaughter and grandmother involve close-ups of the girl, pointing to her Nana’s face on white, uncluttered spreads, which alternate with the colorful, wordless, full-bleed spreads that depict the past. Ciraolo, born in Sardinia, captures body language well, just as she did in last year’s Whatever Happened to My Sister?, another tender story of familial bonds.

The sweet and understated Newspaper Hats will also be on shelves in October – and comes to readers by way of two Australians, author Phil Cummings and illustrator Owen Swan. It was originally published in that country last year. Here, we meet a grandparent who is struggling with memory loss. We see more and more picture books with this subject matter of late, and this one is solidly good, handling the theme of loss with a light touch.

A young girl visits her grandfather in a nursing home. “Will Grandpa remember me today?” she asks her father. When she enters his room, he’s reading a stack of newspapers. He doesn’t immediately remember who his granddaughter is, but he does recall very old memories, as he looks at framed childhood photos. When they see an old photo of her grandfather having made her a newspaper hat, she suggests they do so right then and there in the nursing home. This is an overriding metaphor that works seamlessly and is never too heavy-handed – the folding of the newspapers is so much history folding over itself, as it has for this man nearing the end of his life. Even the book’s endpapers depict newspaper headlines, monumental events, such as “First Hubble Images” and “John Lennon Shot.” In the end, as they stand outside with other folks in the nursing home, a hat flies away, the girl not able to retrieve it. “Don’t worry, Grandpa,” she tells him. “We can make another.” Indeed. She’s not going to leave his side and can, patiently and lovingly, create new memories, despite his fragile mind.

Everything about this book is soft, even its art: Swan’s watercolors, predominantly pastel-colored, are lightly saturated, and never once does he crowd a spread. Occasionally, you’ll see letters or words in the text that look as if they have been cut out of a newspaper and pasted down, reminding readers every now and then of the compelling role of history and memory in the lives of the elderly.

Finally, there is Helen Frost’s Applesauce Weather, on shelves already and the recipient of a Kirkus starred review. This one is not a picture book; it’s a novel in verse with a folksy setting and tone, accompanied by Amy June Bates’ cozy, pastoral pencil drawings. For young Faith and her brother Peter, applesauce weather, or the time when the first apple falls from the tree, means their great uncle will visit. This year, though, he’s without his wife Lucy, and the children can tell he’s not the same. In fact, readers know of his internal struggle, because Frost brings us the point of view of more than one character in the story. “Are the children expecting a story from me?” we read from Arthur’s point of view after he finally arrives at their home. “They’re not asking—perhaps / they can see the empty place /where my stories would be / if Lucy were here to hear them.”

Uncle Arthur, as they call him, loves to tell stories—he especially loves to spin tales, much to Faith’s eternal curiosity and delight, about a missing finger—and it’s through the sharing of various family narratives that readers sense he comes to some peace about the loss of Lucy. The children grow and learn during this time too; all the story’s threads weave together nicely, buoyed by satisfying character development.

Three compelling stories about all ages – for the young and old to share together.