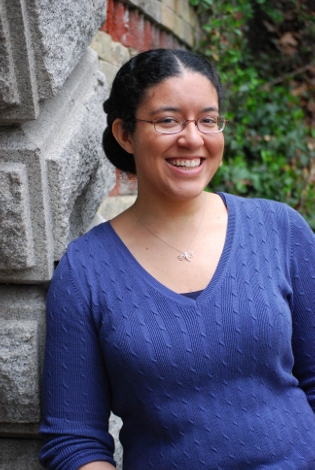 I’m doing something different this week. I normally write about picture books, but the events in Ferguson, Missouri, have weighed heavy on my mind, as they have for many Americans. At his site this week, professor and children’s literature scholar Philip Nel shared his thoughts on Ferguson. He writes about, for one, the despair he feels over this country’s structural racism and how the events in Ferguson generated a singular impression of anguish he struggles to articulate. His thoughts resonated with me and many people I know; one sometimes feels hopeless to respond in the face of such institutionalized and deep-seated wrongs. (Nel’s post also includes an impressive list of resources for librarians and teachers.)

But it then occurred to me that reading and sharing such a well-crafted book as Kekla Magoon’s How It Went Down—her latest YA novel on shelves in October and already the recipient of a starred Kirkus review—is one way to respond. The novel tells the story of Tariq Johnson, a black teen shot by a white man, who later claims he shot in self-defense. Magoon brings readers the points-of-view of many of Tariq’s family and friends, never giving clear-cut answers but inviting them to ponder the complex turn of events and truths (and half-truths) behind them. It’s a compelling and meticulously crafted story, and Magoon is a talented writer. If I ran the world, I’d make How It Went Down required reading in all American high school lit courses right about now.

Though she’s currently traveling, I managed to squeeze in a chat with Kekla about this book.

Ferguson has been receiving so much attention in the news lately, but this story isn't new. Black men are profiled all over this country—and too many shot down because of (as more than one of your characters put it) race bias. When and why did you decide you wanted to tell this story?

I started working on this book in the spring of 2012, when the Trayvon Martin shooting was big in the news. I had a conversation with my editor, Noa Wheeler, about the incident and the media coverage. She said “We should do a book about this,” and I responded, “Well, here’s the book I would write….” I turned that conversation into a formal proposal, she bought it, and I started developing these voices.

Trayvon’s death was not the first controversial shooting in my memory, but the legal implications of “stand your ground” and the media storm surrounding the case struck me as different from what I had seen before. As a novelist, my mind quickly burrowed past the headlines to the places where people really live. What does it feel like to lose your best friend, then see his face plastered nightly on CNN? How does it impact a mother’s grief to have her murdered son’s character assassinated by talking heads on TV? How does a 15-year-old girl deal with the fact that the first boy she ever kissed is now a pop culture reference in rap songs on the radio?

These tragic shootings happen all the time, and once again, with Michael Brown’s death and the violence in Ferguson, the issues have risen to the surface of the media. The sum total of these losses is enormous, a blight on our society as a whole and indicative of the deep pain and fear that is carried by young people of color. It is easy to talk about such incidents from the safety of a TV studio, or among the vast coils of the Internet, and to show individual sorrow and collective remorse for the sins our racial history has brought to bear on the present. It is much harder to confront the real causes and to sit with the real impacts. I write these books because I feel a call to look deeper, and a call to speak with all the dark-skinned boys and girls who walk in fear in their own neighborhoods. I say “speak with,” because it would not be fair to say I am trying to speak “to” or “for” them. My hope is that my book can help create a space that is safe for conversation and response. We hear so much about the dead—we also need to hear from the survivors.

You bring us the story from multiple points-of-view, inviting readers to consider the complex motivations behind everyone's actions and never giving definitive answers. I love how we get glimpses of Tariq from more than o

ne person. "You think you know every side of him?" Tyrell says at one point. "You didn't know the half." Was it a difficult book to structure, given the room and space you give readers to suss out events for themselves?

The novel comprises nearly 200 vignettes; placing them in order was quite challenging! Tariq is the central character, but the viewpoint characters all have conflicts and crises of their own that emerge in the wake of his death. Each character faces a crossroad, of sorts. I dug into those issues to develop the story action. The book intertwines several major plotlines, with special focus on the core teen characters as they choose how to move forward. Their lives go on, though they are changed, and as we learn who Tariq was to each of these characters, we put together a picture of who he really was. The book draws these many stories into one and shows the impact that one life—and the loss of one life—can have on an entire community.

I'm fascinated by this statement about race from a character in the book who is black: "Everything I am, everything I do, is not because of my race, nor in spite of it...it’s regardless of it." Is he a character that you, as the author, admire or pity?

Neither admiration nor pity quite feels like the right term to describe my thoughts on Steve. I do find these characters and issues complex, as I hope my readers will. Steve represents a particular attitude that I’ve both witnessed and experienced within communities of color—a belief that if you are good enough and work hard enough, you can somehow rise above racism itself. Steve wants to believe in a post-race America, because he earns six figures, lives in a large house in a safe neighborhood, and has climbed high in the corporate world. He has achieved things that “racism” cannot account for. His journey in the novel requires him to recognize that he is not as disconnected from the hard truths as he thought, which he realizes in the wake of Tariq’s shooting and through his relationship with his stepson, Will.

We never hear from the shooter himself. Can you address your choice to have him silent?

The power of this narrative lies in the reader’s task of unpacking perception and differing points-of-view. Tariq can’t speak because he’s dead, so it’s only fair that his shooter never be allowed to speak directly to the reader either. My readers get to make up their own minds about both individuals.

Thanks again to Kekla for this chat. Next up for her, coming in 2016, is a nonfiction project about the history of the Black Panther Party. “This book,” she tells me, “provides background on issues I address in my fiction—The Rock and the River and How It Went Down, in particular—because it discusses the long legacy of race bias and violence against black Americans, and the many ways, historically, that we have organized in response.”