What Happens at Astronaut Boot Camp 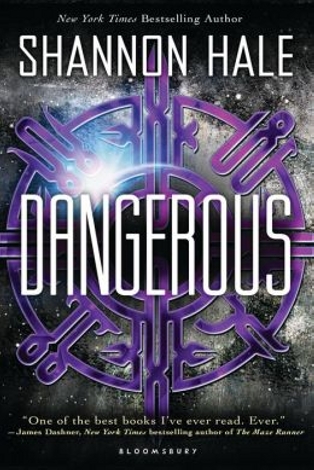 This is the first note I took while reading Shannon Hale’s Dangerous:

And as I took that note when I hit the three-quarter mark ON THE FIRST PAGE, I think it’s safe to say that Dangerous won me over pretty early on.

It’s about Maisie Danger Brown—no quotation marks, because Danger is her ACTUAL middle name—16-year-old homeschooler, daughter of scientists, aspiring astronaut. Her family doesn’t have the money to send her to fancy space camps, and she’s pretty sure that the fact that she was born without a right hand will keep her from being actively recruited into a related program. So she focuses on being awesome at science, and when she spots a contest for a three-week stint at Astronaut Boot Camp, she enters. To her surprise, she wins!

Just a few pages later, she and Ms. Pincher—her prosthetic arm—are off to Texas. At first, space camp isn’t all that different from regular camp, complete with camaraderie, romance and, yes, a few jerks. But that’s BEFORE she goes to space. BEFORE she gets infected with alien technology. And BEFORE she realizes that it’s up to her to SAVE THE WORLD.

Shannon Hale has written nuanced, complex re-imaginings of fairy tales, she has written hilarious adult romance, she has written original fantasy, and with Dangerous, she has proved that she’s perfectly capable of writing a cracking SF yarn as well. It’s funny, it’s smart, it’s emotionally complex, it’s super-ultra-action-packed, and it features a cast of characters that is diverse ethnically, culturally, physically, experientially, and economically. Maisie is well-rounded in her interests, in that she draws equal strength from her passion about science as her passion for poetry, and she’s perfectly capable of talking anyone’s ear off about either. She’s also good at looking at situations critically and objectively, and while she’s grown up in an insulated, almost cloistered environment, she’s pretty savvy about people.

While the romance isn’t the focal point of the story, and while it doesn’t overpower the rest of the story, that aspect of the story WILL generate discussion, and rightly so. I found it problematic, though my issues may be based more on personal preferences than in objectivity. (I’ll let you decide!)

Maisie’s feelings for Wilder certainly affect her actions, but they don’t drive them, and even when she makes a Classic Blunder—trusting him when she’s not entirely sure that he’s safe—her reasoning for doing so is based on more than the smooches they’ve shared. On one hand, it could be argued that the Maisie/Wilder arc is about trust built, lost and regained; about forgiveness; about putting the fate of the world above your own desires…but it could also be argued that Dangerous is just another story in which a guy makes a girl feel terrible; withholds key information and makes her decisions for her; manipulates her into doing what he wants “for her own good.” Hale tries to avoid the latter, but ultimately—especially considering how the book ends—she doesn’t entirely succeed.

But! As I said, I may not be being entirely objective here—that specific power dynamic is one that never fails to burn my britches—and it is VERY much worth discussing! I’m still mulling it over, but regardless of where I end up on that front, I’m already looking forward to what Hale does next. What do you think it’ll be? Historical fiction? Murder mystery? Caper novel? Only time will tell!