What's New in YA for November 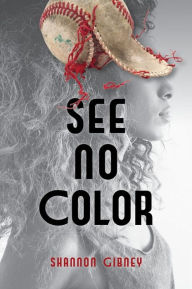 New month, new books! Here are the titles I’ve got my eye on:

See No Color, by Shannon Gibney

A debut novel about transracial adoption—written by an author who is a transracial adoptee—the complexity of family and identity, and, as you’ve no doubt gleaned from the cover, baseball. Also, secret letters, romance, and sisterhood. Starred reviews from Kirkus and Publishers Weekly.

Seeing Off the Johns, by Rene S. Perez II

Historical fiction—1998 is historical!—set in a small Texas town.

Two star athletes die on the way to college; while the rest of the town mourns, Concepcion “Chon” Gonzalez has a hard time thinking about anyone other than Araceli, the girlfriend of one of the dead boys. The end of high school, grief, the beginning and ending of first love, the closeness and claustrophobia of small town life, the excitement and pain associated with leaving home.

Everything I’ve read by Martine Leavitt has been beautifully written, as well as consistently surprising due to the huge differences in subject and style. This one is about high school senior Calvin—born on the day the last Calvin and Hobbes strip was published—who gets hospitalized for schizophrenia, and then decides that his best hope is to find Bill Watterson and ask him to draw one last strip. Starred reviews from Booklist and Kirkus.

All In, by Jennifer Lynn Barnes

Another book about my favorite group of teenage profilers? YES, PLEASE.

The Kirkus reviewer wasn’t entirely bowled over by this one, which the

y described as “The Shining–meets–The Great Gatsby,” but I’m a sucker for stories set in hotels—and ESPECIALLY haunted hotels—so I’m going to give it a whirl.

This Way Home, by Wes Moore and Shawn Goodman

Three boys in Baltimore get involved with a gang; getting out will always involve some sort of consequence, but the longer they wait, the more entrenched they’ll all be. Friendship and loyalty and hard choices and family and a basketball tournament—it’s gotten mixed reviews, but it’s on my radar nonetheless.

All the Major Constellations, by Pratima Cranse

ANOTHER historical set in the ’90s. Apparently November 2015 is bound and determined to make me feel old? This one is about a boy in Vermont who, after an accident puts one of his best friends in a coma, starts attending his crush’s evangelical church and ends up spending the last summer before college figuring out love and belief and most of all, HIMSELF. Starred reviews from Kirkus and Publishers Weekly.

One of Us, by Jeannie Waudby

A girl infiltrates a violent extremist group…and begins to question everything she’s ever been taught about them. Identity and perspective and hard questions and complicated answers. Starred review from School Library Journal.

Sci-fi fairy tales, swooooooon! I have to get caught up in this series—I adored Cinder, liked Scarlet, and haven’t been able to make time for Cress yet—but there is no way I’m going to miss the last book in the quartet! Starred review from Booklist.