The Worlds of C.J. Cherryh 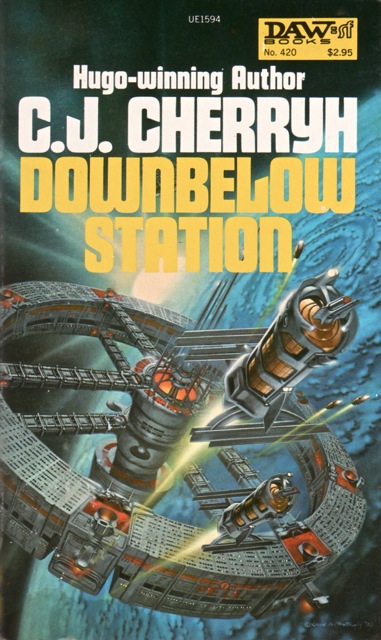 Carolyn Cherry (who would come to be known as author C.J. Cherryh) was born on September 1st, 1942, in St. Louis, Missouri, and grew up in Joplin, Missouri, and in Lawton, Oklahoma. In 1949, her younger brother, David, was born, and they would remain close throughout her life. Life during the remainder of World War II was difficult, when necessities such as food, fuel and money were scarce. "Entertainment," her brother would later note, "was talking to your friends, reading a book, or listening to the radio, if you were lucky enough to have one." Cherryh found books were the best sort of escape: Her father gave her a copy of Tarzan and the City of Gold, although she had already been a fan of comic books. She read her way through the library, devouring books such as Robert E. Howard's Conan stories, and "[r]ead every 'lost world' [she] could find and was a fanatic listener to Tom Corbett on radio." She was hooked.

By the age of 10, her family had purchased a television set, which provided her with a new platform for adventure. She fell into the worlds of Flash Gordon, Tarzan, Tailspin Tommy and Tom Corbett and the Space Cadets. When Flash Gordon was canceled, Cherryh began to write her own adventures, eventually "chang[ing] every fact and character to something opposite. And ended up with an original." Writing became a new passion. Her brother noted that "frustrated with the lack of good science fiction available to her, she began writing stories of her own." She never stopped.

In 1960, Cherryh entered the University of Oklahoma, where she studied Latin and graduated in 1964. From there, she attended Johns Hopkins University, where she became a Woodrow Wilson fellow, and ultimately graduated with her master’s degree in Classics in 1965. Her brother noted that "she was the first Cherryh in living memory to obtain any degree whatsoever, and we were all terrifically proud of how well she had done." From Maryland, she returned home to begin teaching at the John Marshall High School, where her younger brother attended. There, she taught Latin, and took students on tours to England, France, Spain and Italy. Her brother noted that "[She] knew it all and used all her gifts as a storyteller to present it to us as an entire fabric, a whole that was fascinating to see unfold."

Her gifts at storytelling would ultimately take her on a new career path. Driven to publish her stories, she submitted manuscript after manuscript, receiving numerous rejections. She began to study the books that she enjoyed and discovered Donald Wollheim. "I targeted Don, finally taking a systematic approach to sending out books, because I went through my own library and investigated who was the editor who had bought most of my favorite books—figured we had similar taste."

ublishing company, DAW Books. In 1976, Cherryh submitted one of her novels to him, Brothers of Earth. He rejected the book, but sent her a personal rejection. Armed with confidence that an editor had taken some amount of notice in her work, Cherryh began writing a new novel, Gate of Ivrel, and completed it in two months, all "while teaching a full schedule. [I] ate at the keyboard, slept when I could." She later described Gates as "the first time a book really found an ending and really worked....It was a set of characters I'd invented when I was, oh, about thirteen." The book was accepted. Wollheim and Cherryh became close friends early on, with Cherryh often staying at the Wollheim’s home when she visited New York. As they readied the book for publication, Wollheim asked Cherryh to change her name: Her given name, Cherry, sounded too much like that of an author of romance novels, not science fiction. And that is how Carolyn Cherry became C.J. Cherryh. Soon, Gate of Irvel was followed by a revised version of Brothers of Earth, and in 1976, both books hit bookstores.

She made an immediate impact in the science fiction community and left her teaching position to devote her time to writing. Brothers of Earth was nominated for a Locus Award for Best Science Fiction novel, and Cherryh was awarded the John W. Campbell Award for Best New Writer in the following year. In 1977, DAW released her next novel, Hunter of Worlds, a sequel to Brothers of Earth, which would go on to earn another Locus nomination. These novels were early entries in a universe which she had begun to develop, the Alliance-Union, a sprawling future history which would eventually encompass dozens of entries. The Encyclopedia of Science Fiction describes the world as taking place in the "Galaxy through the third and fourth millennia, during which period the Alliance, structured around the Merchanter cultures which operate the huge interstellar freighters necessary for trade, manages to survive at the heart of the more ruthless, expansionist Union." Her 1978 novel The Faded Sun: Kesrith was a new entry in this broad world and was serialized in Galaxy Magazine in the February through May issues that year. It eventually earned her another Locus nomination, as well as nominations for the Hugo and Nebula Awards for Best Novel.

Her next novel, Serpent's Reach, appeared in 1980, and was nominated for a Locus Award, but

it was in 1981 that she published one of her best known novels, Downbelow Station. The story details the mounting tensions between Earth and a number of distant stations and worlds, and the war that breaks out between Union planets and Company interests. Jo Walton described the book as a "dense, complex book written in a terse, futuristic style, from multiple points of view, some of them alien and many of them unpleasant," but that "It has a marvelous perspective on humanity in the wider universe." Downbelow Station finally landed Cherryh her first major award, winning the Hugo Award for Best Novel in 1982.

Over the coming years, DAW and Cherryh would publish numerous Alliance-Union novels, as well as other massive cycles of fiction, most notably Cherryh’s Foreigner series, in addition to numerous fantasy entries. She’s published over 60 novels thus far in the four decades in which she's been writing, an extraordinary number that speaks to her popularity and prolific body of work.

Cherryh likely owes her complicated network of stories to her own background in Latin and classical history. In a short interview with Patti Perret for the book Faces of Science Fiction, she notes that "[She's] a technologist. My scholastic study was classics/archaeology, which is a study of how humanity got from picking up a rock to wondering (eventually) how to find a more efficient rock....One thing you learn in archaeology is that there weren't any good old days...compared to now. With local blips and dips and peaks in the chart of human affairs, the steady trend has been uphill and better." This outlook lends itself well to the vast space epics which she has produced thus far, and indeed, many of the major “Future Histories” have incorporated the long term outlook for human behavior, recognizing that major stories can fit into larger historical epochs, all the while providing innumerable opportunities for plot.

Examining Cherryh's list of awards is revealing; she has earned nearly a hundred honors, from nominations to placements to wins, receiving a level of critical and popular acclaim that few authors ever attain over the course of their careers. It's also notable that she entered the speculative fiction genre as a novelist, rather than going through the typical route of submitting short fiction to magazines before making the jump over. Interestingly, she cites two major space opera authors as inspirations: Robert Heinlein and Jack Williamson, each of whom created their own major universes, both of whom began writing short fiction before making the jump over to novels. In many ways, Cherryh's own career can be considered a legacy of these older giants of science fiction, infusing her own particular brand within the genre as she did so. Cherryh was part of a new cohort of science fiction authors that visibly included and recognized female authors in the years after several prominent feminist writers helped to set the stage for broader acceptance within the ranks.

Thomas Disch opines in the book The Dreams our Stuff is Made Of that the success of Cherryh's books is owed in part to author Joanna Russ. Russ’ "strategy of hypothesizing women who can cope in a 'man's world' rather than, as [Ursula K] Le Guin would have it, remodeling human nature on a maternal template, seems to have carried the day, where the most popular new women writers—C.J. Cherryh and Lois McMaster Bujold—have taken their cue from Russ, writing gung-ho Realpolitik space operas that make the author of Gor look like the wimp he was. Their attitude would seem to be: Feminism? Okay, we won that war. Now let's move on to the next conflict." Bujold herself noted that while the “boy's club” mentality persisted in science fiction, "There's a girls' club out there too. We've got C.J. Cherryh, lots of other women writers."

Fantasy author Camille Bacon-Smith notes that it was during the 1980s that female authors began to dominate genre writing; they, including Cherryh, began to earn widespread recognition for their works through awards and stints as Guest of Honors at major conventions, helped along by editors and publishers who recognized that the production of excellent stories wasn't confined to a certain gender. Cherryh seems to take a noncontroversial approach to her fiction. When asked about her approach to focusing on female characters, she explained that her "goal is to create characters that men can identify with just the same as women identify with the male heroes. Everybody wants to be a hero in what they're reading." This, coupled with her work to publish her first novel, demonstrates Cherryh's ability to create a durable universe that remains in demand to this day: Her latest Foreigner novel, Peacemaker, arrived in bookstores this past April.

Cherryh's works provide a couple of important signposts for readers: She is part of a post–Golden Age, Hard Sci-Fi movement that remained popular even as other literary movements, such as Cyberpunk and New Wave fiction, appeared in bookstores, joining the sci-fi marketplace at a time when short fiction largely lost its prominence in favor of paperback novels—a medium which lends itself well to the complicated, detailed stories Cherryh was producing. Finally, she established a rapport with science-fiction readers and fans, who have in turn rewarded her vast output with nominations and acclaim as she continues to add to her wide body of work. In doing so, she has inspired hundreds of readers to continue forward and tell their own stories, such as Ann Leckie (Ancillary Justice) and Julie Czerneda (In the Company of Others).